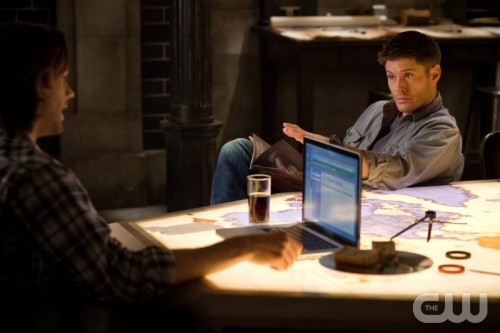 Tonight on the CW SUPERNATURAL returns with a new episode called, “Goodbye Stranger.”  On tonight’s show while interrogating a demon, the three discover Crowley has been torturing Meg (guest star Rachel Miner), who knows the exact location of the crypt.  Did you watch last week’s show?  If you missed it you care read a review here!

On last week’s show Sam (Jared Padalecki) and Dean (Jensen Ackles) were stumped when they investigated a possible zombie case where an amnesiac man (guest star John Reardon) died and then revived himself once a day. After the guy was attacked by the goddess Artemis (guest star Anna Von Hooft), Sam and Dean realized he was not a zombie but instead a god, more specifically, Prometheus. Steve Boyum directed the episode written by Daniel Loflin

On tonight’s show SAM, DEAN, CASTIEL AND MEG TEAM UP AGAINST CROWLEY AND HIS DEMONS — Castiel reappears in Sam and Dean’s life and tells them Crowley (guest star Mark Sheppard) has unleashed several demons into a small town. The demons are looking for Lucifer’s Crypt, which holds a valuable asset, but Castiel lies to Sam and Dean about what it is. While interrogating a demon, the three discover Crowley has been torturing Meg (guest star Rachel Miner), who knows the exact location of the crypt. Sam and Meg fight to hold Crowley off while Dean and Castiel go in search of the crypt. Thomas J. Wright directed the episode written by Robbie Thompson.

Dean is walking in a hallway with his gun out and Castiel stabs him in the chest with his dagger. The lights come on and Castiel’s boss Naomi walks out and commends Castiel. The scene widens to numerous dead Deans on the floor. Dean is looking at a spear of destiny and other ancient artifacts. Sam is coughing up blood while at his computer and hides it from Dean. Dean finds an old female pornography magazine.

Sam tells Dean about two victims that were mutilated and discuss what it could be. Dean finds Sam’s napkin with blood on it. They go to one of the victims’ homes and are questioning the husband of one. He tells them about the strange habits she developed before she died. He shows them a room of a small building model and holes that she was digging for an unkown reason. She had been phoning with an unknown person and her eyes had turned black like one of the demons. He went on a trip and came back to her dead. Sam an Dean leave and discuss her strange behavior.

They arrive at another house and discover that the other victims were doing the same things as the woman. They question the older lady in the house and discover that it was she who the dead woman was talking to on the phone about an old orchard. The orchard was connected with the underground railroad. She tells them that they had arranged a time to meet and she didn’t show up but was in contact with her assistant, Matt. He shows up to the house as a demon with two others and they began to attack Sam and Dean. The older woman runs from the house . Castiel appears and slays the demons that were attacking them.

Sam and Dean are talking with Castiel about the demons that attacked them. Sam inquires Castiel about where he has been and answers that he had answered Dean’s prayer. Castiel says he has been hunting demons searching for the other half of the demon tablet. Crowley had sent out demons looking for Lucifer’s crypts that contain a “demonic decoder ring.” Castiel goes to interrogate one of the demons that attacked them. Sam and Dean are skeptical of Castiel and he reminds them that he can hear them. Sam and Dean speak with the older woman, who is a demon, again and finds out that the dead woman was obsessed with them.

Castiel tortures her for information about the crypts. She tells them about one of Crowley’s pets that has been researching them. Castiel kills her before she can divulge important information about the crypts that he doesn’t want them to know per orders from his boss. He leaves and Sam and Dean chase him to the apartment that he went to to find another dead demon that had Crowley’s “pet” captive. They question her and finds out that she is tired of him and answers all their questions. She’s been lying to Crowley and his demons to buy herself time to figure out a way to escape. She tells them that they have found nothing relating to the crypts and that many of the demons working for Crowley have been killed by Castiel.

She tells them about the angel tablet that Lucifer has stashed away in one of his crypts and Crowley is looking for it as well. She offers to work with Sam, Dean and Castiel to find the right crypt. She shows them the location of the crypt. Sam and Dean grow more skeptical of Castiel because of his behavior. Castiel is cleaning up the wounds on the demon woman that is helping them while she is attempting to flirt with him. Sam and Dean locate the exact position of the crypt and question whether they can trust her or not. Castiel and the demon have a sexual history together that she is playing on with him. One of Crowley’s demons informs him of the situation and he shows up to the scene to speak with him in person. He is upset that he has lost her and kills the demon there.

Sam, Dean, Meg and Castiel are walking towards the entrance to the crypt. Dean tells Sam that he saw the bloody rag in the trash can and that he hasn’t been okay since the first trial. Castiel tells Sam the he’s damaged beyond even his help. Dean and Castiel go to the entrance to the crypt while Sam and Meg stay back to cover the entrance. They feel a draft in a wall and Castiel puts his hand to the wall and begins to break it down. Sam and Meg are talking outside and she asks him about the damage done to him and he diverts responding about his trials. Sam tells her about a woman he saw in his last year and that that is what he wants for himself while being away from the job that he has been doing for years with Dean.

Castiel tells his Naomi that the crypt is guarded against angels and she warns him not to involve Dean in more than he already knows about. He has Dean open a box inside to discover the angels tablet. Castiel tells Dean to hand it to him so he can take it to heaven and Dean says no and to take it to Kevin to translate it. Castiel is acting even more suspicious. Castiel’s boss Naomi tells him to kill Dean and take it. Castiel tells Dean that he can’t let him take it and Dean still says no. Dean asks him how he got out of purgatory. She tells him to kill him like he has practiced.

Castiel pulls out his dagger while Dean is trying to break through to him. Castiel tells her that he can’t kill him and Naomi does something to his mind. He states it out loud and Dean hears him say her name. Meg and Sam are attacked by demons at the entrance while Castiel is fighting with Dean. Crowley shows up at the entrance. Dean tells him to take the tablet but he has to kill him first. Naomi tells him to end it and he continues to punch his face. Dean tried to reach through to him while he holds his dagger above his head. Dean pleads to him that they need him and he’s family. Castiel drops his dagger on the floor and picks up the tablet. A blinding light fills the crypt and the chamber that they were in and he is gone.

Castiel has the tablet in his hand next to Dean and he heals the damage that he did to him in the fight. he apologizes for what he did to him. Crowley talks with Meg and Sam about Castiel and the hunting that he’s been doing. Crowley tells them that he is there for the angel’s tablet and Sam says no. Meg tells him to go tell Dean and Castiel. Crowley tells Meg that they’re trying to close the gates of hell and destroy all the demons. Castiel tells Dean that he has to protect the tablet from Naomi and him then vanishes with it. Crowley is beating up Meg when Sam and Dean get into their car to drive away. Meg stabs Crowley as he stabs her in return to kill her.

Crowley and Naomi are talking in the crypt that the tablet was in. They’re talking about Castiel and how he is gone with the tablet protecting it from all of them. Crowley tried to strike a deal with her. Sam and Dean are in the car on the road talking about what happened back in the crypt. Dean tells Sam that he can’t take any more lies from anyone. Sam apologized for not telling him about the problems that he’s been having. Dean asks if Castiel was right about his injuries from the trials. Dean tells him that he can’t understand what he’s going through but he’s there for him. Castiel is on a bus with the tablet going to an unknown location and Naomi is informed that they don’t know where he is or where he’s going.