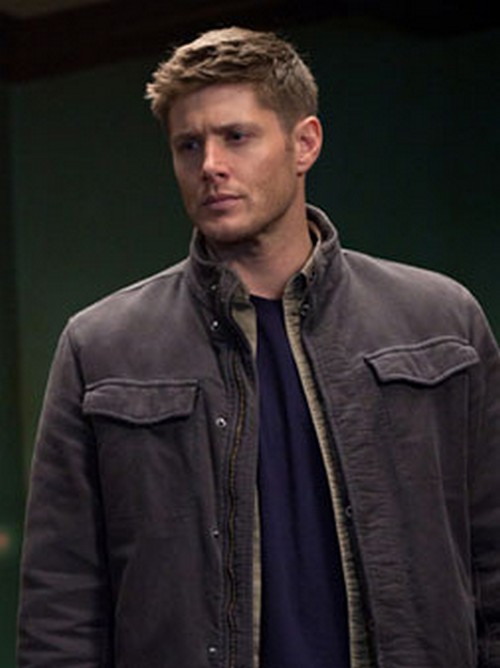 Tonight on the CW SUPERNATURAL returns with a new episode called, “Taxi Driver.” On tonight’s show After hearing Kevin’s news, Sam and Dean team up with reaper named Ajay (guest star Assaf Cohen), who helps them deal with the second trial from the Tablet. Did you watch last week’s show? If you missed it you can read a review here!

On last week’s show  Sam and Dean  investigated some recent vampire kills and were surprised to learn Krissy Chambers was involved. They find Krissy and learned her father was killed and she had been taken in by a man named Victor, who has taken in a group of orphan kids to teach them how to hunt.  Victor was helping the teenagers find the vampires who took their parents so they could get revenge. Sam was intrigued by Victor’s method of giving the teenagers a home life as well as a hunting life, but Dean was suspicious of Victor’s motives.

On tonight’s show SAM AND DEAN FACE THE SECOND TRIAL — Sam and Dean respond to a call from Kevin (guest star Osric Chau), who is terrified after hearing Crowley’s (guest star Mark Sheppard) voice in his head. After hearing Kevin’s news, Sam and Dean team up with reaper named Ajay (guest star Assaf Cohen), who helps them deal with the second trial from the Tablet. Meanwhile, Dean receives a visit from Naomi (guest star Amanda Tapping) and realizes he must find Benny (guest star Ty Olsson) and ask for a huge favor. Guy Bee directed the episode written by Eugenie Ross-Leming & Brad Buckner.

On tonight episode of “Supernatural”, we see Kevin, a man who is slowly envisioning that he’s losing limbs. He makes a emergency call to Sam and Dean. He tells them that Crowley is his head and refuses to believe the Winchester boys when they assure him it’s just his imagination. There’s only one thing left to do but take road trip to hell.

The boys interrogate a demon from the crossroads, surprisingly not a female, over how to get into hell. After some “persuasion”, the demon reveals that anyone can be smuggled into hell or even heaven. After telling them want they need to know the demon then asks them to kill him because it would better than Crowley.

They find a reaper, Ajay, and asks for his help but are shocked to meet the man that took Bobby to hell. They burned his body just so Bobby wouldn’t go there. Thinking on his feet Dean comes up with the idea of getting Bobby but Sam tells him. Sam goes with the reaper into a alleyway where apparently the gates to hell are hiding in among the graffiti. However once reaching hell, Sam is informed that’s its instead Purgatory.

Pissed that he’s been taking to Purgatory, Sam accuses the Ajay of setting of a trap.  It’s not a trap. It’s just that Purgatory leads to the gates of Hell.  Going back Ajay, leaves Sam to fend for himself

Dean rejoins Kevin only to find him hiding in a closet. Kevin thinks it’s the only safe place. Giving him a pep talk along the lines of suck it up, Dean gives him food and  once taking what’s offered Kevin goes back into hiding.

Crowley meets up with Ajay. Scaring the reaper, Crowley finds out that Sam’s in purgatory right before killing the Reaper. Cowley never liked traitors

On his journey in Purgatory, Sam stomps through the wilderness before entering a dark cave. There are voices, moans really, and the occasionally laughter in the cave. Walking along the corridor he meets several people and a severed head all asking for help.  Before he turns into one cell and finds Bobby who then promptly punches him.

Bobby thinks Sam is a demon. Sam reveals person info in order for Bobby to finally believe. After hugging, Bobby reveals that’s how he’s tortured . He sees Sams and Deans all the time. Yet after reassuring himself that Sam’s not dead he find out they’re going to do a prison break.

Back on earth, Kevin finally comes out of hiding. He reveals he feels safe now because he hid the tablet. He refuses to tell Dean where he hid it much to Dean’s frustration. Just when Dean is getting angry he meets an old friend of Castiel’s who tries to convince him that they working on the same side. But when she sees he’s not buying it, she can’t help to tell him that before the gates of hell Sam has to travel through Purgatory.

Bobby and Sam escape Hell, after Bobby took a chance and killed the Sam impersonator, but Bobby is angry to find that entered Purgatory. Walking through woodlands, Bobby voices out loud about where they go from here. Now the sad part, Sam has to tell Bobby that they burned his bones so his soul has nothing to hold onto topside but he can’t enter heaven either. Bobby doesn’t have much time to dwell over his fate because they reach the gate to earth and Sam realizes something must be wrong or else Ajay would have already been there.

Dean meets up with old ally, Benny, who can get him into Purgatory. Benny makes it known that he hasn’t been doing so well on earth and assures Dean that it isn’t a problem for him to go back especially if it’s for Dean.  To get him there, Dean kills him. It’s too bad a demon caught the entire exchange between them.

Benny makes it to Purgatory in time to save Sam and Bobby making Bobby wondered what the Bobby have been doing in his absence. Taking Bobby’s soul into himself Sam makes it to gate topside only to find people hunting him and Benny. Benny sacrifices himself so that Sam could still go home to Dean.

Dean is sadden when he finds out what happens to Benny but happy about Sam and Bobby. When Sam tries to release Bobby’s soul to heaven though; Crowley freezes the spirit on its journey and tries to resend Bobby back to hell. He stopped by the mysterious angel who makes sure Bobby continues on to the pearly gates. Before leaving the boys she says ” I told you could trust me” . But can they really? Was helping Bobby a way for her to buy their trust?

Kevin returns to his hidey hole where he begins to hear Crowley again. It doesn’t take long when Crowley reveals himself to Kevin.  After inflicting pain with words did Crowley hurt Kevin physically? Sam and Dean don’t suspect a thing after returning to Kevin’s and finding him and all his stuff gone.

If Kevin is dead what happened to the tablet? Guess the viewers won’t find out anytime soon. The show is taking a short hiatus.