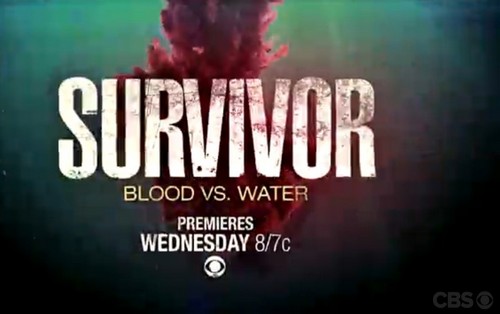 Tonight on CBS one of my favorite shows SURVIVOR returns for its 27th season premiere and this year it is Survivor: Blood vs Water.  Tonight’s episode is called, “Blood is Thicker Than Anything” and we will find out if it is because we have relatives competing against each other.  On tonight’s episode we meet the twenty castaways who will compete.  The contestants feature former players competing with their relatives who all have the same ultimate goal: to outwit, outplay and outlast and ultimately be crowned Sole Survivor.  To find out about the new cast, we have them all HERE for you to check out!

On tonight’s episode Blood vs. Water relationships are put to the ultimate test on Day 1, when castaways are shocked to learn they will be separated from their loved ones and have to compete against each other on separate tribes. Meanwhile, a former castaway attempts to rehabilitate their reputation, on a special 90-minute premiere.

Tonight’s episode looks like it is going to be great and you won’t want to miss it, so be sure to tune in for our live coverage of CBS’s Survivor: Blood vs Water at 8:00 PM EST! While you wait for our recap hit the comments and let us know how excited you are about the return of Survivor?  Who are you rooting for?  Check out the sneak peek of tonight’s episode below.

RECAP: On the first night, everyone must stay in the jungle with no resources and there are tons of ants; the game has already begun and it’s not even day one. Leaving behind the comfort and safety of their homes, these survivors will be challenged for 39 days and there will be only one Survivor.

The next morning, everyone joins Jeff on the beach. First, he asks Hayden how Survivor compares this to Big Brother and he says it is nothing like it. Jeff then announces that the returning players will be playing against their loved ones. Jeff gives everyone a moment for hugs, then the wake up call starts. Rupert found watching his wife go to the other tribe, he had a little relief and then a little sadness. The returning players are called Tadhana and the new players are called Galang Tribe.

Right now, on the beach, each tribe is going to vote someone out. Hayden is shocked and says first impressions are going to speak loudly. The first new player voted out of their tribe is Laura and Rupert takes it as a direct smack against him. Time for returning players to vote, Candice is voted out. John wants to vote out every single person who voted out Candice. Laura and Candice are voted out of their tribes, but not out of the game. Every person voted out of the game will go to Redemption Island and battle it out to stay in the game. Jeff puts the returning players to the test, he asks Rupert if he wants to take Laura’s spot at Redemption Island, she will return to the game, but in his tribe and he will have to battle it out. Rupert makes the switch and Jeff never anticipated this. Tina is really ticked because Rupert is an excellent fisherman and shelter builder.  John now has the same opportunity, he goes over to Candice and they decide that she is going to battle it out against Rupert. Big move early on, Rupert has pulled himself out of the game to give his wife a chance. Jeff send the rest of the two tribes off to their camps.

It’s been 13 years since Gervais has played Survivor and he is really looking forward to it; he thinks Galang is a strong tribe, but he really doesn’t want to play with Laura and sees that she will be the first one to go. Meanwhile, Laura finds it really intimidating to be around so many experts. It doesn’t take long for the Galang tribe to have fire, it took fifteen minutes.

At Tadhana, everyone is working hard around the camp, there are no veterans, so they are trying their best. The women are doing some weaving, working at the camp and the men have gone to a waterfall to enjoy some cool water. John and Brad form an alliance to keep the men in an alliance against the women; but John thinks Brad might get bit in the butt later because he is going around trying to form an alliance right from the start.

At the Galang tribe it is the first night and Colton tells everyone that it is so fun to be with them all. Colton thinks he was mean and rude last time and this time around he wants people to understand that he is no longer like that. Colton is crying and everyone is bonding with him, is it his strategy?

At Redemption Island, Candice cannot believe she is in this position; Rupert meanwhile is either sleeping or in the water while Candice is doing all the work and she is pissed. Rupert is doing nothing because he wants to reserve his energy for the challenge and he is very happy seeing Candice burn all hers doing chores.

Tree mail has arrived and everyone is excited. But, they find out it is going to be a physical and mental challenge with a puzzle combination. The tribes meet on the beach for the very first immunity challenge. Jeff asks Colton how it is going, he tells them they have fire and shelter thanks to the team effort; they are ready. Tadhana doesn’t have fire, but they tell Jeff that they do which really frustrates Hayden. In addition to immunity, the tribes are playing for fire in the form of flint.

The tribes run out into the water, they need to swim out, up and over obstacles; new players are in an early lead because they are working together. Gervais is really having a hard time in the water, I think he is going to find himself voted out early again. The new players have already finished all the obstacles and are now untying a serious of knots to release a boat. Aris is helping Gervais make it to the boat before he drowns. The new players have their boat untied and are ready to go with the returning players not far behind them.

At Tadhana, the men are grouping together to vote out one of the women. Marissa seems to be the prime target because Gervais was jumping up and down when his tribe won and looked a little too happy.

It is time for Tribal Council, Hayden tells Jeff that they do not have fire. Caleb tells Jeff that it is really complicated having your loved ones on the other tribe. John tells Jeff that he has guilt for his decision in not taking his wife’s place at Redemption Island. John says that his wife is not going to pull any punches, the person going to Redemption Island will have a hard time in the challenge. The tribe talks about Gervais celebrating so much, Marissa even says that she was surprised and didn’t expect that from him. Marissa is worried because she is guilty by association and thinks she should be judged for her personality and not Gervais’ actions.

it is time to vote, Caleb is first. Time to tally the votes, once the votes are read the decision is final. First vote is Katie, second and third are Marissa, third is Marissa, fourth is Marissa; first person voted out of Survivor Blood vs Water is Marissa. The good news about Tribal Council, Jeff gives the tribe fire.