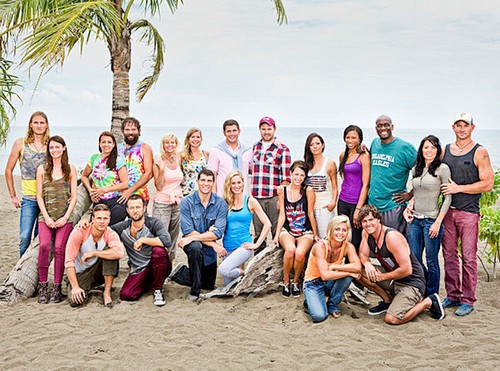 Survivor is back on Wednesday, September 18th with Season 27 and this time host Jeff Probst is taking us to Palaui Island, Santa Ana, Cagayan in the Philippines. The big twist the season is that there are two tribes comprised of returning castaways competing against their loved ones; everyone wants a chance to outwit, outplay, outlast and ultimately walk away with the title of Sole Survivor. The real question here will be, is blood thicker than water? Will the returning castaways help their relatives, or leave them alone to fend for themselves like they would any other castaways. No doubt about it, relationships are going to be tested to the limit.

The game starts with the 10 returning castaways spending the night together with their loved one and Jeff makes them think they are playing as pairs, but that is not the case.

The returning castaways are going to make up the yellow tribe called Galang and the loved ones are going to be in the red team called Tadhana.

That’s not all, the castaway who finishes first in each duel will also get to give a clue to the location of a hidden immunity idol to any person from either tribe that they choose; that’s a lot of power.

One couple this season has a disadvantage in the game as they had no time to prepare before being flown out to appear on the 27th season. Candice Cody and her husband John replaced RC Saint-Amour (Survivor: Philippines) and her father Craig who was disqualified because his blood pressure was too high. Will this disadvantage affect their game?

Here are your castaways:

Kat Edorsson (Survivor: One World) returning with her boyfriend Hayden
Moss whose claim to fame is winning Big Brother 12.

Survivor’s 27th season returns Wednesday, September 18th at 8:00pm with a special 90 minute premiere episode. Jeff Probst promises that this season is going to be full of twists, looks like it’s going to be a great season!