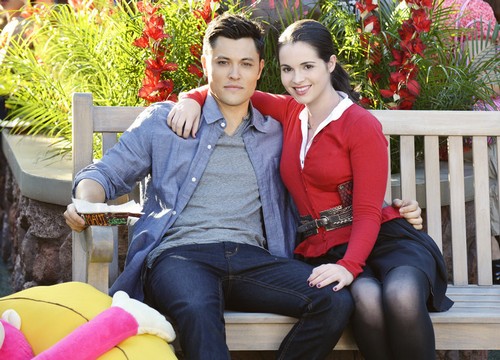 SWITCHED AT BIRTH returns to the ABC Family tonight with a new episode called, “Distorted House.”  On tonight’s show after a rocky start, Bay and Ty get to know each.  Did you watch last week’s episode?  If you missed it we have a full and detailed review here for you enjoyment.

On last week’s show while Regina has been away at rehab, Daphne has grown closer to the Kennish family, spending her days at their country club and spending her nights in their guest room. This new family dynamic does not sit well with Regina, who unexpectedly returns home early in hopes of spending more time with Daphne.

On tonight’s show Bay begins to reconnect with Ty, but then learns shocking news about his experiences in Afghanistan; Toby and Travis both seek a managerial position at John’s car wash; Kathryn and Daphne must adjust to Bay’s request to stay with Regina.

Tonight’s episode is going to be the usual great episdoe and you won’t want to miss it, so be sure to tune in for our live coverage of the show tonight at 8 PM EST! While you wait for our recap hit the comments and let us know how excited you are about the return of  “Switched At Birth.”

Her decision almost crashes and burns with Katherine until her mom finally caves. Although when Daphne hears about she does her best to convince Bae on another solution. Any other solution. But Bae wants out and not for Daphne to try and fix the tense living situation.

John is approached by another senator with an offer.

Daphne and Katherine are at their tennis practice.  The practice doesn’t go well and their coach tells them to work on synchronization. Daphne has been having a temper problem since Bae left.   When a mother daughter duo catches up with them, the ladies are asked if they’ll be doing the Mother-Daughter Tennis Tournament but Katherine declines saying they’re not ready for it.

Bae first official day at work and she meets two new colorful co-workers.  Her day continues downwards when she can’t get anyone to come to her booth. Just when she’s getting desperate Ty comes around. He asks her out and later when he leaves his friend/ Bae’s co-worker, Mary-Beth, says she’s glad Ty is going out. “That’s a good sign”.

Toby and Nikki are planning their wedding. There still is some apprehension but they did decide on a cake. Devil’s Food with Raspberry filling. What would the pastor say?

John is angry his input wasn’t asked for after hearing Bae moved in with Regina. John doesn’t want his daughter around a recovering alcoholic. Also he’s worried about Bae wanting to stay with Regina once she gets a taste.

Daphne goes to visit her mom at Angelo’s. She ends up treating her Regina to meal but not before looking around at the apartment.

Travis has been a great asset to John at the car wash. Even saving him money so he can’t help but offer up himself as a new manager while John is trying balance his senate seat. John is called away yet he does he agree to talk it over with Travis later.

Angelo is able to track down his baby. The new family looks happy but Angelo wants his little girl back.

Bae and Mary-Beth are talking about Ty. Bae wants to know how Mary-Beth met him. Apparently her brother served with Ty overseas. Unfortunately her brother killed himself after returning home. Bae tries to bring up Justin’s suicide with Ty while they’re eating. He manages to invade the subject making sure that he doesn’t want to open this discussion again.

Toby goes to his dad with an offer. He wants to take over management. This way he’ll be able to afford his wedding with Nikki. The young couple doesn’t want to take money from his parents.

In the car, Ty has a moment of zoning out before Bae snaps him out of it. She wants to know if anything is wrong when she sees his tattoo. It’s the stencil she had given him when he was deployed. She’s freaking out a little but doesn’t have time to question him especially with the car behind them blowing his horn for them to move.

John now has to choose between his two choices for manager. He asks Katherine for advice. Katherine mentions how Travis is going to need an interpreter. Also he’s still in school. Even though John hears her valid points he also states that Travis doesn’t have anyone in his corner like Toby will always have.

Bae is still worried about Ty. She talks it through with Regina and can’t help talking about how she had dumped Ty over the phone. Regina doesn’t want her to be worried. Angelo’s call interrupts their heart to heart. Angelo tells her how he found the baby but now has to wait till he hears from the lawyers and the adoption agency. He asks Regina how did she stop herself from grabbing Bae the moment she found out about the switch.  Regina can’t give him the answer he needs. Too bad the adoptive father of Angelo’s daughter decides to confront him over why he’s following the man’s family.

Daphne and Katherine are doing the tennis tournament. Still they’re out of synch and they end up losing. Daphne was carrying around her attitude from earlier so Katherine decides to have it all out. Daphne blames Katherine for Regina leaving. Katherine calls it unfair and that maybe Daphne should take some responsibility instead of throwing tantrums.

Regina goes to visit Ty on base. She lets him know she’s here for him if he needs it.

John appoints a new manager. He chose Toby but he didn’t let Travis in on this decision earlier. Instead Travis found along with everyone else. By the point he wasn’t interested in John’s explanations.

Ty meets up with Bae after her shift is over. He tells her he’s ok and she doesn’t have to keep watch over him. He’s able to talk now. He had gotten the tattoo because he met the real life hammer girl. A little kid who just wanted to play soccer with the little boys. The little girl was caught out by an uncle and Ty never saw her again. He tells Bae that bad things happens to girls over there and he got the tattoo to remember the real life hammer girl.

Angela returns home. The baby he saw wasn’t his. Regina thinks she and Bae should go but Angelo asks her to stay. He wants his family with him right now.

Daphne and Katherine make up. They decide to bring over dinner for Regina and Bae. They make it to Angelo’s only to see the family unit that was created without… them.