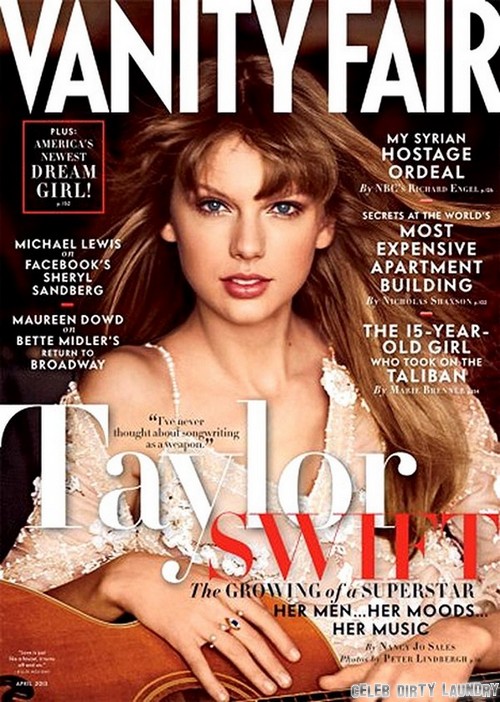 If you are one of the many fans who were left wondering what went down between Taylor Swift and One Direction singer Harry Styles, then we’ve got your answers right here!

As you can see in the above photo, Taylor appears on the latest cover of “Vanity Fair”. Inside the pages, she has authorized her friend to speak on the topic of her breakup with Harry. Apparently, Harry was quite the bit of a Cheater McCheaterson! Who knew?!?? Us Magazine reports:

In the magazine, Swift says she not the “clingy, insane, desperate girlfriend” that she’s made out to be. In fact, the “We Are Never Ever Getting Back Together” singer claims Styles pursued her.

Swift, who only discusses her romances through song, authorized a source to speak on her behalf to Vanity Fair. According to the insider, Styles “wore her down” to get her to finally agree to be his girlfriend. “He was all, like, ‘You’re amazing — I want to be with you. I want to do this.'”

The relationship got rocky when Swift saw a picture of Styles “making out” with a friend. She broke things off, but Styles eventually convinced her to take him back. “But the whole time she says she feels like he’s looking at every girl,” the source says. When they were in London together, the boy band member “disappeared ” one evening and “after that it was like he just didn’t want to keep going.” Styles’ rep, however, says the claims are “undeniably false.”

So he pursued her, made her his girlfriend and when the chase was over, he left her high n’ dry. What a douche, right? What are your thoughts on their breakup now that we have this brand new information? Hit the comments and let us know what you think!