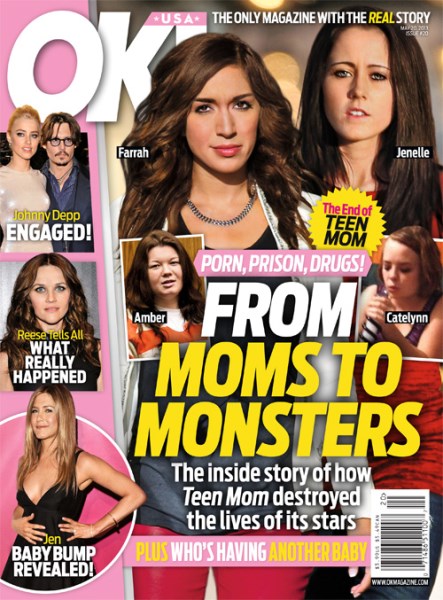 I think MTV finally made a decision that has been a long time in coming- they finally pulled the plug on their Teen Mom reality TV show series. If you think about the young girls whose lives have been followed by MTV’s cameras you would have to agree that the former music authority certainly hasn’t done them any favors! The new may 20th print edition of OK! has decided to take a close look at the series and the stars that have spun out of control after MTV lined their pockets and gave them the means to get themselves into more trouble, rather than having to buckle down and focus on caring for their kids.

On the off chance that Farrah hadn’t tarnished MTV’s brand there’s always Jenelle Evans who has spent the last year busting her ass in order to perhaps become the most infamous Teen Mom of all time. It’s easy to forget that Jenelle has a 3-year old son named Jace, when she constantly feeds the media stories of her own bad behavior. There are the domestic abuse cases, the assaults, drug busts- the list goes on. Jenelle got married late last year but her current on/off husband is no better than the other trash bags that she has dated. This girl thrives on chaos and drama and seems to enjoy the attention that her had girl behavior brings. Seriously, even Amber Portwood (who no one believed could be surpassed in Teen Mom bad girl infamy) knew when to pull the plug! She is currently serving a 5 year jail sentence rather than trusting herself out here in the real world!

The new issue of OK! will also bring you the latest on Reese Witherspoon’s run in with the law. Even Hollywood’s good girl’s can have a few drinks too many and find themselves arrested! Find out what she has to say about the embarrassing video that was released of Reese running her mouth at the arresting officer. Is it a glimpse at who Reese really is, or was it just one of the worst night’s of her life immortalized on camera? Tell us your thoughts in the comments below!