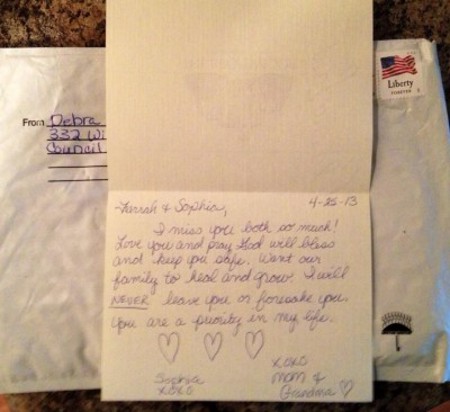 Previous Teen Mom star Farrah Abraham has supposedly reconciled with her mother, Debra Danielson, after a family feud that was reportedly sparked by the fact that Farrah made a sex tape with James Deen. Just FYI, this lil’ sexy time tape sold to Vivid Entertainment for $1 million, and Farrah has gone on the record to say that she’s more than satisfied with the outcome of the film. The only thing that had her distressed was the unapproving stare of her mother, but the little feud between these two appears to have blown over.

The Teen Mom recently moved out of her mother’s house after Mom disapproved of her daughter’s new business venture. They relocated to Texas, but now all seems well.

Farrah posted a picture of a letter she received from both her grandma and mother. Farrah tweets alongside the picture: “Awh look my #1st letter from my #Mom after moving:) #BIGDEAL xo.”

In the card, Farrah’s mother says that she loves her daughter a ton and, no matter what, will “never leave or forsake” her. Well, glad to know this little family is back together and well! Tell you what . . . . It definitely had me stressed out a bit (not a lot though).

On her video deal, Farrah tells InTouch Weekly: “I am happy with the seven-figure settlement I have reached with what I feel to be the best adult entertainment company in the industry, Vivid. I look forward to my future goals of completing my Master’s degree and focusing on being a great mother for my daughter as well as many other culinary business endeavors in my future […] “This is a risk for me to take; however, I feel comfortable with giving the rights to Vivid, a company I know can handle the media and press surrounding my sexuality.”

What do you think about all this family drama? Do you think Farrah made the right move with the tape?