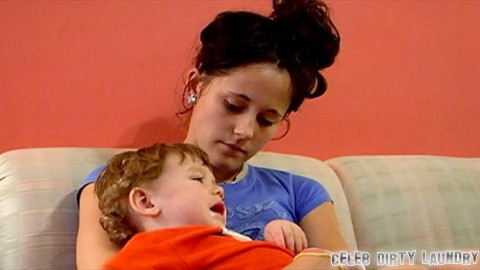 It’s not unusual for the cast of MTV’s Teen Mom shows to disagree, the infamous Moms are constantly bickering and criticizing each other’s parenting and lifestyle choices. But, last night Jenelle Evans and Matthew McCann waged probably the most ridiculous Teen Mom twitter feud yet. The pair argued publicly on Twitter for nearly an hour, over which one of them had a bigger drug problem, and who was a better parent.

Matthew McCann is the father of Teen Mom 3 star Alex Sekella’s daughter, and appeared in a few episodes of the most recent season of Teen Mom. He also battled drug addiction on the reality series, ended up hospitalized after a near fatal overdose, and does not have custody of his daughter. Alex coined Matthew a “deadbeat” early on in the series, and he lived up to the accusation flawlessly. 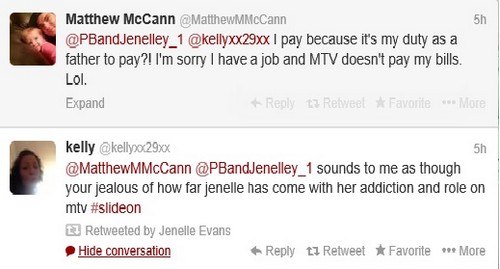 So, how did the Twitter feud all begin? Surprisingly, Jenelle didn’t start it! Matt read an article that was published yesterday about Jenelle no longer having to pay child support, and decided to publicly call her out on it. He tweeted, “Can someone ask QueenJenelle or whatever how not paying child support is a good thing?” Jenelle took offense and quickly replied, and the argument escalated into them airing each others’ dirty laundry all over Twitter, and bickering over who had had a bigger drug problem, and who has been a better parent to their children. 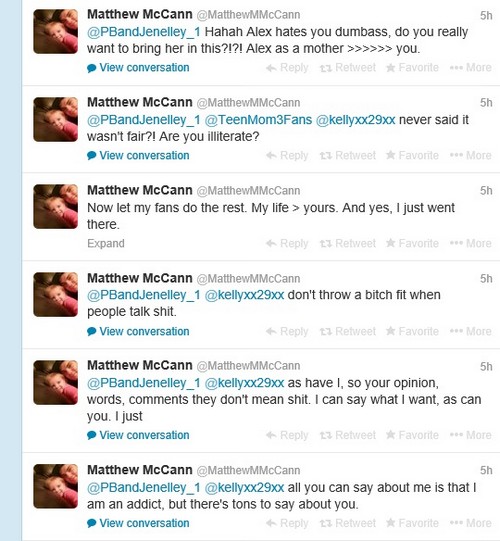 As funny as that is, it gets better. Jenelle may have found someone more delusional than herself. Matthew McCann’s closing argument went something like this, “Now let my fans do the rest. My life > than yours.” Fans? Matthew McCann thinks he has fans? And, even better, he thinks he has more fans than Jenelle Evans? Jenelle Evans is a household name, granted for all the wrong reasons, but everyone knows who Jenelle Evans is. 9 out of every 10 people that read this article will probably say, “Who is Matthew McCann?” He had a minor role on one season of Teen Mom 3, and the few times he did appear on the show he was high as a kite, and arguing with Alex. Why would he have fans? Jenelle Evans has literally 800,000 more Twitter followers than Matthew, I’m sure his fans really stuck it to Jenelle.