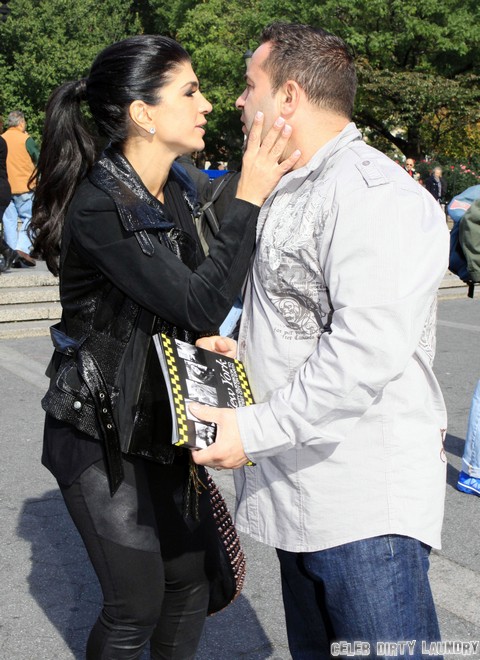 I keep thinking that someday Teresa Giudice will not only get the fact that she’s married to a cheating scumbag, but actually do something about it. Up until this point The Real Housewive’s of New Jersey star has had a stand by her man approach when hit time after time with proof that Joe Giudice cheats on her with anything in a skirt that’ll have him. His most recent outing was at the Hurricane Club in NYC on April 22nd.

According to the May 13th print edition of Star magazine Joe threw back drinks with a skinny young brunette. According to the video they had three vodka martinis each before Joe put his hand on her thigh which seemed to be the cue to leave, together. I’m sure that Joe has an excuse at the ready for why his hand was on her leg and I’m also pretty sure that Teresa must go bonkers behind closed doors when these situations pop up, wouldn’t you think?

Why is it that Teresa stays with this clown? I mean he makes her look like a pathetic fool but for some reason Teresa seems to think that divorcing him would be even worse. Clearly she doesn’t need him. If you’ve seen the show then you know that she takes care of their four kids, not Joe. The girls seem to avoid him and have totally disrespected him on camera. Also as far as money goes, Teresa is clearly the breadwinner here so it’s not like she would be broke if they split up. Sources close to Teresa say that once she has finally had enough of Joe’s behavior then expect her to really cut loose and have a lot to say- probably to the highest paying magazine!

Will this latest incident be the think that unravels the Giudice marriage? Tell us your thoughts in the comments below!