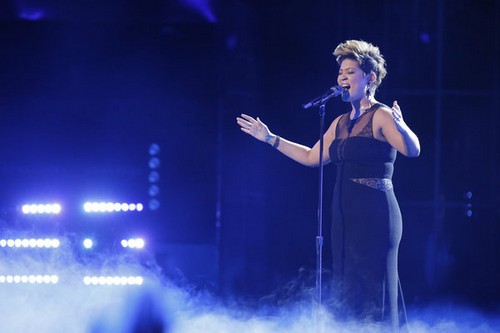 Tessanne Chin took the stage tonight on THE VOICE for her Top 3 Final performance and her new song choice.  Team Adam’s Tessanne Chin sang “I Have Nothing”” by Whitney Houston.  Tonight’s show the remaining artists from each coach, Christina Aguilera, Adam Levine, CeeLo Green and Blake Shelton team performed live for America’s vote and and the chance to win the title of ‘The Voice.’

Judges Comments: “Adam says he has no thoughts right now and it’s all just emotions; it’s obviously sacred ground right now with her singing Whitney’s songs. He believed that her rehearsal was flawless was so amazing; he didn’t know if he should laugh or cry with how she delivers such perfection. He believes that she nailed that song without a doubt; he has no idea where her talent ends. He believes she is the winner of the show.”  Don’t forget if you want Tessanne to win the voice you have to vote for her.

On tonight’s show Phil Collen, Rick Allen, and Vivian Campbell perform “Pour Some Sugar On Me” with the four Voice coaches: Adam Levine, Blake Shelton, Christina Aguilera and CeeLo Green! On tomorrows finale Lady Gaga, Celine Dion, NE-YO and OneRepublic are set to perform in the live two-hour fall-finale.  Lady Gaga will perform her current single “Do What U Want,” from her latest release, “ARTPOP.