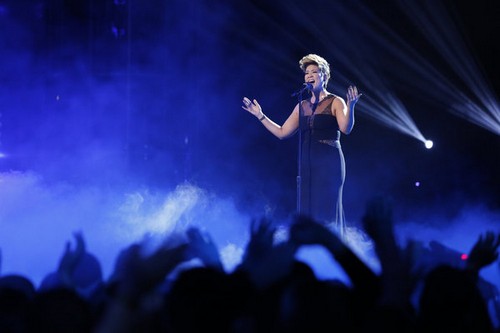 Tessanne Chin took the stage tonight on THE VOICE for her Top 3 Final performance and her Blind Audition Reprise song choice.  Team Adam’s Tessanne Chin sang “Try” by Pink.  Tonight’s show the remaining artists from each coach, Christina Aguilera, Adam Levine, CeeLo Green and Blake Shelton team performed live for America’s vote and and the chance to win the title of ‘The Voice.’

Judges Comments: “Adam says that he thinks that everything Tessanne does just draws him in and he says it’s funny being his coach because her talent is so amazing that he enjoys the process of working with her; every moment they have done has really been fun and inspirational for himself to be better and that she is one of the most loving people he has ever met. CeeLo says that Tessanne is a fan favorite and has evolved so much throughout this competition; the pressured environment has really changed her into an even better performer.”  Don’t forget if you want Tessanne to win the voice you have to vote for her.