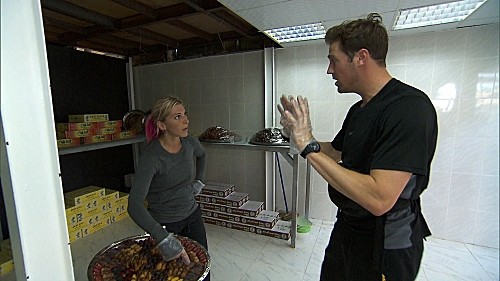 Tonight on CBC their Emmy award winning show THE AMAZING RACE continues with a new episode.  On tonight’s episode called “Speed Dating Is the Worst”  an intense dispute breaks out at the mat.  Did you watch last week’s episode 6?  If you want to know what happened, we have a full and detailed recap, right here for you.

On last week’s show one team was tempted by the Fast Forward but will their choice pay off? Meanwhile, Racers struggled to stay in tune with the world famous Vienna Boys Choir and an intense dispute broke out at the mat over a stolen taxi.  Tim & Marie were team number four, Jason & Amy were team number five. An argument broke out about the cab, Marie told them that at the end of the day it’s a game. Jason in return said that he and Amy are going to kick their ass in this game.  At the end of the show Danny & Tim were the last team to arrive, they were eliminated from the race.

On tonight’s show Teams take a joy ride in Abu Dhabi when they rappel nearly 200 feet and race cars at gut-wrenching speeds.  The teams must travel to the Al Mina Fruit and Vegetable Market then collect, sort, and arrange a variety of dates to get the next clue.

RECAP: Nicole & Travis are the first team to leave, they now have to head to Abu Dhabi. Leo & Jamal are on a different plane than everyone else, they arrive first and head to a temple to get their next clue. The women have to dress in black robes and cover their heads, some of the teams feel uncomfortable about this even though they open to all cultures. It’s a Detour next and teams have to choose between “Sort It Out” or “Sew It Up”. In the first one teams have to search through an overwhelming variety of dates to form an elaborate display. In the other, teams have to make a traditional fishing display.

Tim & Marie keep arguing over their task and the other teams are getting really annoyed. Nicky & Kim find it is really embarrassing and inappropriate being in another country that this is how Tim & Marie are representing Americans.

Leo & Jamal have made their first attempt at making the date variety, but get told it is not right. Nicole & Travis are trying to get their fishing display done, they are having a hard time but keeping it together. Jason & Amy are the first team to finish the fishing display, they get their next clue and now have to go to Al Bandar Marina to take a luxury yacht ride.

Leo & Jamal are done, they also get their next clue and head to the marina with Nicole & Travis quickly behind them.

Tim & Marie are finally done, she also has seemed to have calmed down her yelling; Ally & Ashley are also done. Nicky & Kim are the last team to finish.

Leo & Jamal are thrilled that they are the first team on the yacht; but they leave every fifteen minutes so other teams won’t have so long to wait.

It’s now a Roadblock, “Drop and Drive” where  each team member must drop two hundred feet by zip line, then go on a thrilling ride where they must read a sign when they pass it. There are ten or twelve signs and they have to figure out which is the right one. Once this Roadblock is finished, teams must head to The Champions Podium, which is the next Pit Stop for this leg of the race.

Leo & Jamal are the first team to finish and arrive at the Pit Stop; they win a trip for two to Paris, France. Meanwhile, Jason & Amy are on their way to the Pit Stop. Ally is zip lining and so nervous about the 200 foot drop.

Tim & Marie are team number four at the Pit Stop. Meanwhile, Ally fails again and has to go around another time, this gives Nicky & Kim a chance to pull ahead.

Nicky & Kim are done, but Ally & Ashley have arrived at the Pit Stop and are team number five. This means that Nicky & Kim are the last team to arrive, but he surprises them and says that it is a non-elimination leg, they are still in the race.