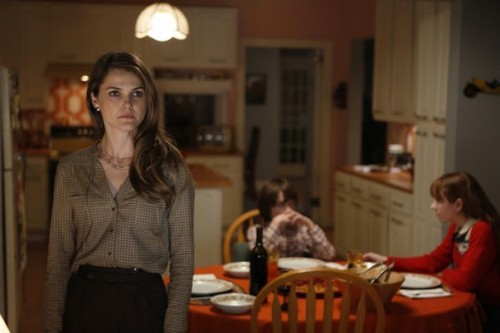 Tonight on FX THE AMERICANS return with a whole new episode, “Covert War.”  If you have not watched the show the Americans is a period drama about the complex marriage of two KGB spies posing as Americans in suburban Washington D.C. shortly after Ronald Reagan is elected President. The arranged marriage of Philip (Matthew Rhys) and Elizabeth Jennings (Keri Russell), who have two children – 13-year-old Paige (Holly Taylor) and 10-year-old Henry (Keidrich Sellati), who know nothing about their parents’ true identity – grows more passionate and genuine by the day.

On last week’s show Stan pursued a lead that put him on the trail to one of Gregory’s crew members, closing the gap between him and Elizabeth, and reigniting some of the deepest conflicts between her and Philip.

On tonight’s show events in Moscow strike a personal chord for Elizabeth when 3 top level KGB agents in Moscow are targeted by Federal agents.  This leads her to take on a dangerous mission she can’t complete without Philip’s help, and placing the couple on a collision course with both Grannie and the FBI.  Elizabeth is determine to find the man who did it and kill him.

Tonight’s episode looks like it is going to be a great episode and you won’t want to miss it, so be sure to tune in for our live coverage of FX’s “The Americans” Season 1 episode 11 at 10 PM EST! While you wait for the recap, check out our sneak peek video of tonight’s episode below!

In their hunt for vengeance, the FBI has managed to pinpoint several KGB agents. But they won’t be bringing them in for questioning. They plan to hunt and kill these agents. One of whom was the man that matched Phillip and Elizabeth together.

Elizabeth and Stan’s wife,??, are having a girls night out. They’re drinking and enjoying themselves when the question of cheating comes up. Elizabeth quickly sideline the conversation in order to dance but her partner is suddenly calling home only to find her husband is yet again not there. Later on when Stan come home, he finds a drunk Susan. She tells him how she call his job all the time only to find he left hours ago. She knows he’s having an affair.

Meanwhile Phillip is hanging out with the kids at his hotel room. His decision of veding machine’s choice of dinner continues in having his kids prefer him.

Elizabeth finds out from Granny that her mentor was killed. Granny warns that after she refuses to follow the orders last time she better not make that mistake again. Elizabeth, although, can’t stop thinking about her mentor Vicktor. In particular she remembers their conversation about love. Coming out of her reverie, she tells Phillip that she’s going to hunt down Vicktor’s killer and kill him. Phillip tries to caution her but to no avail.

Elizabeth is surveilling an FBI agent, she plans on grabbing him but Phillip is still trying to talk her out of it. He tells her that they just went against orders and they shouldn’t jeopardize anything out of personal feelings.

Phillip gets called over at Martha. Unfortunately for him it’s trap. It’s a dinner with Martha and her parents.  The parents are gushing over Phillip/Clark when he make his excuses to leave early. When Martha is saying goodbye to him; he manages to say he was really pleased to meet her parents. But luckily for Martha, she doesn’t see his expression as he’s leaving.

Elizabeth is remembering  telling Vicktor about her second pregnancy. This enforces her before she leaves the car, where Phillip has joined her, to get some payback. Styled in a red wig and glasses she enters the bar and immediately spots her guy. Lightly flirting with him at the bar, she manages to catch his interest. Yet she holds it through a crossword puzzle. After asking what four letter words finishes this sentence “Do you wanna…”

As they’re in the bathroom going at it, Elizabeth’s plan of drugging him goes belly up when her prey quickly caught on. But she does ending up subduing him. They sneak him out of the club by passing his body through the bathroom window.

Stan meets up with Nina at their spot but tells her that they have to stop their relationship. Nina says ok but then goes on to tell him that he was the only thing he had left. Well, him and fear. He tells her that its his wife. Supposedly accepting this she then drops her robe to put back on her underwear. Unable to resist Stan removes what she slowly accomplished to put on.

Elizabeth has the agent tied to a chair ad blindfolded. He tries to psyche him out.  She tells him that it isn’t about money or info but about the people in Moscow that died. He tells him that he’s just the messenger, he didn’t come up with the orders unlike her. He tells her that she’s not even a real person just a gun that has no identity. Elizabeth loses it and run out.

Phillip finds her crying and tries to help but Elizabeth hates the feeling of being out of control. Elizabeth doesn’t end up killing him but releasing him instead.

He’s interviewed later on at FBI headquarters. He tells them that it’s a couple, a woman and a man. But that her wanting to kill him was personal.

In her final memory of Vicktor, she remembers him telling her how he devoted his life to the party but now misses what he never had.

Meeting in a car, Elizabeth confronts Granny over her dropping the agent’s name and then telling Elizabeth not to do anything about it. Elizabeth thinks Granny wanted to first discredit and later bring her to heel. Granny tries to defend herself with how she was only testing Elizabeth however theses two women simply do not like each other. Elizabeth ends their little chat with threat.

On next week’s promo, on their hunt for info, Elizabeth and  Phillip don’t know that the man they let free has given a sketches of them to the FBI.