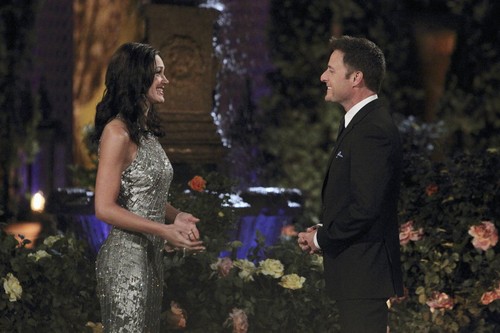 By now THE BACHELORETTE Desiree Hartsock has accepted a proposal from the man she chose to spend the rest of her life with and ABC,  is airing the “After the Final Rose” finale special right after the finale of The Bachelorette.  Did you miss tonight’s finale?  If you did you can read our full and detailed recap here.

On tonight’s show  immediately following the season finale, Brooks, Chris and Drew join Desiree to look back at the shocking outcome of their journey.

Emotions run high as Desiree sits down with Chris Harrison, live, to talk about her three final bachelors from this season – Brooks, Chris and Drew. She will take viewers back to those final days in Antigua when Brooks, the man she fell in love with, decided to go home. She will discuss her feelings in those finals days, her relationships with the final three men and the heart-wrenching decisions that she had to make that changed their lives forever. Brooks, Chris and Drew are back to discuss the shocking outcome of the season. It’s the poignant ending to Desiree’s heartfelt journey to find true love

Desiree Hartsock started with 25 possible love interests on the first night of The Bachelorette.  She weathered the highs and lows of finding love and now has two potential husbands waiting to meet her family.  ABC has broken down the paths of these final two suitors by every date they’ve had this season.  Follow Chris and Drew’s paths [CLICK HERE]

Stay tuned to Celeb Dirty Laundry for all the details tonight when it is is going to be an emotionally packed show that you won’t want to miss. ABC will air the “After the Final Rose” special tonight at 10pm, following the season finale.  Join us here at Celeb Dirty Laundry for all the final moments of Desiree’s search for Mr. Right and the final stop in her journey to find true love.

RECAP: What a roller coaster this show has been with one of the best and most surprising endings ever. Desiree went from devastating heart break to finding love. The woman with all the answers, Desiree, comes on stage to sit with Chris in this live show.

Desiree says that Chris is an amazing man, so open and expressive. Desiree says that she never put pressure on having the ending be a proposal. Chris goes back to Brooks and announces that he is on the show tonight as well, but first he wants to know if Desiree ever noticed the red flags. Desiree says that he had a hard time sharing her with the other guys, but that was it and she knew if after home towns if he still felt that way it would be a huge red flag.

Brooks is on stage, he is nervous to see Desiree and admits that it was tough watching the show back because it resurfaced feelings. Brooks claims that he was invested in the relationship. Desiree says that he was honest and helped to give them both closure. Desiree wants to know what happened to change his mind, what was that one thing after the home town dates. Brooks says that he wanted it to work out so badly that he didn’t really look into his feelings, his head was ahead of his heart. Chris asks Brooks if he felt he led her on, Brooks says that he was honest and expressed the best he could how he felt. Brooks has no clue how the show ended, Desiree tells him that after he left it was really good because then she was able to dig deep into the other relationships and now she is engaged to Chris. Brooks claims that he is not surprised, Desiree always looked at Chris.

Brooks leaves and Chris turns the talk towards Drew, asks Desiree if she broke his heart and she says yes she did. Drew says it is a flood of emotions seeing Desiree again, it has been a long recovery process. Drew has founds his happiness again, but watching recent episodes has really brought everything back. Drew says that he never saw anything that would have made him know that she was going to dump him. Drew tells Desiree that she is an amazing woman and is happy to know that she got what she was looking for in the end. Drew asks Desiree if he could have done anything else to change her mind in the process, she says no. Drew says he asked her on the beach when was the moment that she knew it wasn’t him and she didn’t answer, she again doesn’t answer straightforwardly. Chris asks Drew if he regrets telling Desiree that he loved her, he says no but he is no longer in love with her.

Drew leaves the stage and it is time for Chris to make an appearance. Chris shares his feelings about when Desiree told him he was a great man that he knew she was the one. Chris H. replays the proposal for Chris and Desiree to watch. Chris and Desiree say it was amazing to watch, they loved it. Desiree announces that she is moving to Seattle to be with Chris, they got their own place, a fresh start. Chris has a gift for Desiree, it is another poem and includes all the dried roses that she has given him, the poem is called “My Girl”.

The new bachelor is announced who Desiree called “a dream of a man”, Juan Pablo.  He is a professional soccer player but had to stop when his girlfriend got pregnant. His daughter is four now and he and his girlfriend are no longer together, it did not work out. He is looking for a woman who accepts his daughter and is a good dancer. Juan Pablo can be seen on the new Bachelor in January 2014.