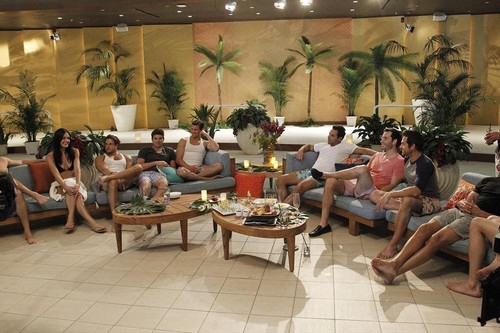 Tonight on ABC THE BACHELORETTE Desiree Hartsock returns as she continues her search to find her Prince Charming. On this week’s episode the remaining Bachelors start their romantic global tour with Desiree in Atlantic City, as the iconic resort plays host to a hot competition between the handsome men.    A touching surprise for a married couple dramatically affected by Superstorm Sandy.  Did you watch last week’s episode? We did and we recapped it for you.

On last week’s show – Desiree upped the ante on a winner-takes-all game of dodgeball with a group of the men, but things turned ugly quickly when a massive pileup ended with someone making a trip to the ER. Kate Earl serenaded the Bachelorette and one the men with some touching love songs in a special performance. A death-defying individual date with Kasey went awry, morphing from a fantasy into a nightmare. Roping and riding took center stage as the stunt coordinator for Disney’s “The Lone Ranger” showed some of the guys the ins and outs of being a cowboy. However, it was Chris Harrison’s surprise call to Desiree that started a wild chain reaction: It was revealed that one deceptive man not only had ulterior motives for being there, but had a girl friend to boot! Desiree’s firestorm of emotion made her question all the remaining men.

On tonight’s show the guys will compete in a Mr. America contest and the hunky men will be competing in a bathing competition that will not disappoint the ladies that watch the show nor Desiree. Lastly, like all pageants there will be “Crazy” performances and one lucky Bachelor with be crowned the winner.  Brad and Des will have the first date of the episode at the Steel Pier amusement park. The two seem to be having a great time eating and drinking but Brad will go home due to issues back home. Why? Will ABC let this play out on the show or is the issue private and Brad refuses to allow the viewers to know his personal struggle.  By the end of the evening, 11 lucky bachelors remain, and it will be up to Desiree to determine if she is in love with any of them when they get to their next spectacular stop on the adventure: Munich.

If you cannot wait for the episode and need to find out more about what will happen tonight head over to our HOT spoiler for tonight’s episode 4 HERE.

RECAP: Chris Harrison walks in to see the 13 that are left, he tells them that there will be something different this week, Desiree has already left Los Angeles. The First stop for the men, Atlantic City and the guys couldn’t be happier. James main focus is get some quality time with Desiree this time around. Michael G. is shocked, he can’t believe how beautiful it is and hopes he gets the one on one date. Brad gets the first one on one date, “Brad, let our love shine through”; he is the quietest guy in the house with already having a child. Brad and Desiree take a walk on the boardwalk and the two go on rides, laughing and smiling all the way. The two also play games where Brad won some toys to bring home to his son Maddex. Dinner is at a lighthouse, conversation is a little rocky and Desiree is a little conflicted. The two take a walk to the top of the lighthouse and the conversation is awkward. Desiree tells Brad that she loved every moment but she thinks something is missing, she doesn’t think the can have a forever and will not be giving him a rose. Brad gets a goodbye and an apology, he tells Desiree that he hopes she finds what she is looking for.

Meanwhile, the guys get another date card, “I’m looking for my Mr. Right” and the guys invited are: Kasey, Drew, Zack, Mike, Mikey, Brooks, Chris, Ben, Zak, Juan Pablo and Bryden. This group date is going to be one that the guys never forget!

After the guys get their swim trunks and Speedos, Chris walks in and tells them that they are going to be performing in front of a live audience.

Time for the show, the judges are the mayor, Ms. America and Desiree. After the interview process, it is time for the talent. Kasey tap dances. Brooks sings. Bryden thrusts. Zak sings really well. Time for the swimsuits, OMG these guys look hot. The second runner up is Brooks, the second runner up is Zak. The winner of the competition and the first ever Mr. America is Kasey who gets a king’s crown and a dozen red roses.

The guys all head to Desiree’s place and Ben moves in for some one on one time right in front of the guys who are not impressed, especially Bryden who really hates him. Zak sings the rest of his song for Desiree. Time to give out the rose, it goes to Zak. With that, everyone jumps into the pool.

James gets the final date card, “Can our love weather the storm?”. They visit an area that was decimated by Hurricane Sandy and are in complete shock. The two meet a couple, Manny and Jan, who were victims from the storm and retell their story. James can’t believe what the couple has been through, they get tour through the house and are shocked. Jan tells how the Red Cross was very supportive to them when disaster struck. Desiree gives up her date with James, she gives it to Manny and Jan to go to Atlantic City together, the limo picks them up and both James and Desiree couldn’t be happier about it. James gets a rose, then he decides to be honest with Desiree. He was in a relationship for five and a half years and cheated on her, they were even going to get married. Desiree can relate, someone cheated on her as well; she asks James if he would do it again. He says no but you can tell she is disappointed.

Manny and Jan get a surprise from the Red Cross it is a replica of an album of theirs that was destroyed in the storm.

There is another surprise for Manny and Jan, a performance by Darius Rucker.

Time for the Cocktail Party, Bryden thinks his feelings are falling and not even sure if Desiree offered him the rose that he would take it.

Michael G. gets some alone time with Desiree and tells her why he likes her so far.

Bryden shares how he feels with the guys, I have no idea why, what an idiot. All the guys just want him to pack his bags and leave, one less guy to worry about.

Bryden gets his alone time and spills how he has been feeling, Desiree tells him that she likes him and wants to get to know him better.

It is time for the Rose Ceremony. Zack is going home, there is no rose given to him.