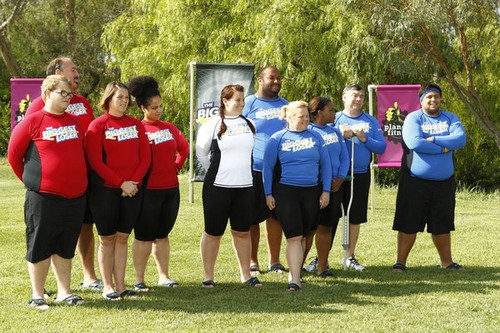 Tonight on NBC THE BIGGEST LOSER returns for an all new episode. On tonight’s show called “Waist & Money” and on tonight’s show contestants learn to make healthy choices. Did you watch last week’s show? We did and we recapped it here for you?

On last week’s show the contestants were on their own last week when trainers Bob, Jillian and Dolvett left town to surprise kid participants Bingo, Lindsay and Sunny and their families with a visit to their hometowns. Some players struggled without their trainer, but others rose to the occasion, and an unexpected leader emerged. In honor of last week’s “Pay it Forward” theme, contestants ran a 5K and money was donated to a local Boys and Girls Club, with the winning team earning $15,000 to split among themselves.

On tonight’s show CONTESTANTS LEARN TO MAKE HEALTHY CHOICES ON A LIMITED BUDGET — This week kicks off with the players returning from a workout, only to find that the kitchen and refrigerators are empty. Tasked with trying to affordably stock the kitchen with a week’s worth of healthy food, the contestants race against time to make healthy purchases within their budget at a grocery.

Later, one contestant struggles to keep trying her best despite weight loss setbacks, while Dr. H and one of the trainers help a contestant realize the importance of addressing the emotional issues that contribute to weight gain. Trainers Bob, Jillian and Dolvett skype with kid participants Biingo, Lindsay and Sunny, and then a swimming challenge puts the players to the test as they compete for one of the most coveted prizes of all. Finally, a tearful elimination sends another player home.

The Biggest Loser season 14 episode 5 airs at 8PM on NBC and we will be live blogging it with all the up-to-the-minute details. So make sure to come back to this spot and spend the evening with us! Make sure to refresh often to get the most current details!  While you wait for the recap, meet the contestants for Season 14 HERE!

Tonight’s show the contestants are speaking about how Pam will be missed.  The Blue Team has five strong, the red team four and the white team, just one, Danni.  Danni is afraid of being alone and she thinks this week is going to make her face her fears since she is alone with Jill on the white team.  She just hopes she can keep up with what Jill has planned for her.

The contestants head back to the kitchen when they finish working out and all the fridges are empty and they all want food.  Jackson finds a note from Alison saying the kitchen is empty and they have to meet her at the grocery store down the street.   They go in the grocery store and Alison tells them it is all about eating healthy on a budget.  This week each contestant will be given $10 a days food to buy food and eat healthy.   They will have to buy enough food for the week based on their $10 a day budget.  They have 15 minutes to put food in their cart and get to the register.

The Blue Team and Red Team register in and they come up just a few cents under their budget, they did a great job.  Last up is Danni for the white team, she is under budget too.

The Blue team seem to be breaking down, several members are frightened they are going to lose this week and there is a lot of whispering.

Dolvett says this week since it is the 1/2 way point this is where the contenders come through.   The red team is worried people are coming after them because they have won the weigh in for three weeks in a row.

Bob meets with the Blue Team he thinks if they do not start attacking and increasing the intensity level they are in trouble.  Bob is behaving like a drill sergeant.  Alex is upset – Bob is frustrated with her.  She feels she is working hard but Bob is still riding her.  Alex is crying as Bob talks to her and tells her that her team needs her.  Alex’s body is pissing her off.  Bob tells her she is fighting for her life and she needs to stop being frustrated.

Dolvett is trying to encourage his players to work hard.  Danni is working hard for Jill, but she thinks being alone she is starting to psych herself out.  Jill encourages her that she can do it.

Bob is pushing the Blue Team hard because he feels they have just been squeaking by.

Jillian contacts Sunny, Dolvett contacts Lindsay and Bob contacts Bingo.  It is five weeks in and they want to check up on the kids.  Sunny is working hard so she can fit into the perfect prom dress.  Lindsey wants to get on the cheer-leading squad.  Bingo feels his broken foot is demotivating him.  Bob is worried about the discipline in Bingo’s life.  The trainers do a video workout with the kids.

They brought Devin Alexander a Biggest Loser chef to show the contestants how to eat on a budget and make it taste good.  The contestants are so glad she came over to help them and they are excited she stopped by.

Bob is doing a workout with the Blue Team and he is really pushing them.  He tells them don’t question him and just do exactly what he tells them.

The teams head to see Alison and it looks like a challenge and it looks like people are going to get wet.  The winner of today’s challenge gets 10 memberships to Planete Fitness.  It is not the only prize today, the winning team gets something else.  The winning gets a choice a 2 lbs advantage on the scale or a chance to call home.

Each team has a  fountain in the middle of a pond so each team has to put 10 coins for each member of their team in the fountain.  Each coin is 5 lbs each and they are sitting in the water.

The competition is neck and neck and everyone is fighting through it.  Danni won it for the White Team.  She has won the 10 one year memberships to Planete Fitness.  She now has to choose the chance to phone home or take the 2 lbs advantage.  She cannot risk going home so she takes the 2 lbs advantage on the scale this week.

The other teams know this gives her a big advantage and it really pits the Blue Team against the Red Team.  Bob takes David to see the doctor because he needs David to contribute if the Blue Team is going to survive this week.  At the doctor David admits he had a previous injury on the knee he now has a problem with.  Bob is upset because he would like to have known David had a previous injury.

Jillian does not want Danni to go home.  Because if Danni goes home Jillian goes home.  So she is going to teach Danni how to fight.

The red team has to vote for someone to go home.  The only person they cannot vote for is JOE who has the highest percentage of weight loss.  No one wants to go home.

Lisa has been eliminated she is not the Biggest Loser.  She vows to go home and work hard because she has a family who is 120% behind her.