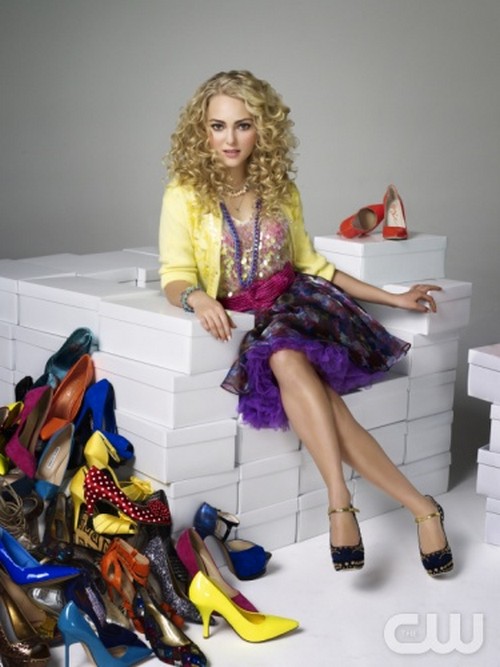 Tonight on the CW the much anticipated prequel to Sex & The City, The Carrie Diaries premieres.  The show is set in 1984, and life isn’t easy for 16-year-old Carrie Bradshaw. Since their mother passed away, Carrie’s younger sister Dorrit is more rebellious than ever, and their father Tom is overwhelmed with the responsibility of suddenly having to care for two teenage girls on his own.

On tonight’s show we learn that  life hasn’t been smooth sailing for 16-year-old Carrie Bradshaw (AnnaSophia Robb) – her mother just passed away, her rebellious younger sister Dorrit (Stefania Owen) is acting out, and their father Tom (Matt Letscher) is struggling to raise two teenage daughters alone.

As Carrie begins the first day of her junior year, she can’t help but feel as though all eyes are on her, and a pity party from rival Donna LaDonna (Chloe Bridges) doesn’t help the situation. Even when surrounded by her group of friends, Mouse (Ellen Wong), Maggie (Katie Findlay) and Walt (Brenden Dooling), Carrie feels as though her life should be heading in a different direction. The arrival of new guy Sebastian Kydd (Austin Butler) brings Carrie some excitement, but it isn’t until she accepts an internship at a Manhattan law firm that things begin to fall into place.

In the city, Carrie meets Larissa Loughlin (Freema Agyman), a free-spirited, outgoing style editor at Interview magazine, who introduces her to a world she’s only dreamt of. Miguel Arteta directed the episode written by executive producer Amy B. Harris.

Tonight’s episode is going to be great and you won’t want to miss it or AnnaSophia Robb as a young Carrie Bradshaw. So be sure to tune in for our live coverage of the CW’s The Carrie Diaries tonight at 8 PM EST! While you wait for our recap, hit the comments and let us know if you think a prequel to Sex & The City will work?  Enjoy some pics and a sneak peek video of tonight’s episode below!

LIVE RECAP: It’s finally here! The premiere of The Carries Diaries which will likely be one of the biggest shows of 2013.  Tonight we’re flashing back to 1984 where we meet 16 year old Carrie Bradshaw. Her mother passed away a few months ago and she and her sister Dorritt are struggling. The show stars with Carrie freaking out because Dorritt has stolen and hidden her purse. Actually it was her moms purse and Carrie needs it to feel close to her mother. Their father allows Carrie to go through her mothers closet to pick out something special. She peruses the dresses and shoes before settling on a pair of sunglasses.

Carrie loves to swim and is on the swim team. She meets Sebastian at the pool and they spent most of the summer hanging out there together. He was her first kiss and just like that he dusappeared when his parents put in a pool. Now on the first day of school Carrie comes face to face with Sebastian.

Carrie’s dad has a conference with her guidance counselor and they agree that a change of pace might do her good. Carrie has the opportunity the work one day a week in Manhattan- the first man that Carrie will love for the rest of her life. She finds her moms old purse and Dorritt dumped nail polish all over it. Carrie decides that instead of getting mad she’ll really make it her own. She throws every color of nail polish at it and writes her name on it as well.

Carrie arrives in the city and is just in awe of everything. She is directed to go across the street to Century 21 to buy stockings on her lunch break. She’s all big eyed looking around when she bumps into the editor in Interview Magazine. They become fast friends and all of a sudden Carrie has an invite out to one of NYC’s hot spots. She’s not supposed to make calls at work but ignores that when her friend calls to tell her that Sebastian is going to invite her to the dance. Her new friend sends her an awesome Madonna style dress to go out in. Carrie gets into a cab and has two choices- go and party with her new NYC pal or take the train home to Connecticut to go to the dance with Sebastian.

Carrie chooses to go and party and crams into a booth somewhere downtown with a bunch of people she has just met. Kind of like the grown up Carrie that we’ve loved for years. After dancing and taking a few swigs of champagne Carrie makes a bolt for the last train home. She gets home to find a front yard filled with police cars. Carrie panics thinking she’s in trouble but her dad tells her that Dorritt is missing.

Dorritt eventually comes home and ends up grounded. So is Carrie for coming in an hour past her curfew . Her dad realizes that he needs to do things the way that her mom would want them to be.  The girls realize the pain of love is what is making losing their mom so hard. Their father takes both Dorritt and Carrie into mom’s closet to pick out things to keep and create a pile to pass on.

The episode wraps up with Sebastian finding his way back to hang with Carrie at the pool and Carrie taking one of her moms blank journals to write all about her new beginnings. Tune in next week to see more of Carrie and her new man-Manhattan!