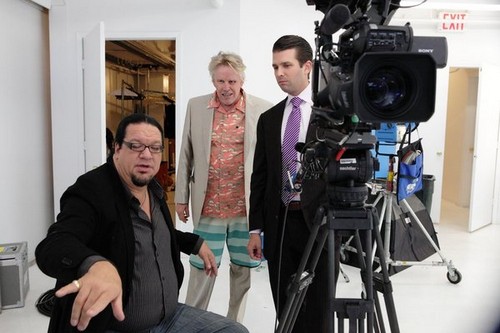 Tonight my favorite show THE CELEBRITY APPRENTICE returns with a whole new episode called, “The First Leaf That Hits The Ground.” On this week’s show the the all-stars must produce a silent film promoting Australian Gold Products. Did you watch last week’s episode? We did and we recapped it here for you.

On last week’s show the celebrities had to create a product display and advertorial campaign to highlight the new “Melania” skin care line. Taking a giant risk, one Project Manager stopped Boardroom Advisor Eric Trump from visiting with their team, while the other team was forced to pull the weight for a lackluster team leader. In the Boardroom, everything boiled down to one critical error, and a celebrity paid the price for it. Boardroom Advisors were: Ivanka Trump and Eric Trump.

On tonight’s show the All-Stars must once again work to promote popular Australian Gold products, this time by creating a silent film. One project manager is cast aside when a power-usurping teammate takes over the task. Meanwhile, the other project manager risks everything by going against the advice of a teammate. Boardroom Advisors: Ivanka Trump and Donald Trump, Jr.

The show airs tonight at 9PM and you do not want to miss all the drama, cat fights and bitching. You also do not want to miss seeing who is fired.   So don’t forget to come back to this spot for our live recap of the Celebrity Apprentice All-Stars Episode 7.  While you wait for our recap let us know how you are enjoying this season of The Apprentice.

They all discuss who is being kicked out. Lil Jon correctly predicts that Dennis was fired. Lil Jon says that he wishes Dennis well but Plan B needed a loss. They are happy to see Tracee.

Penn says that his charity is for those with intellectual disabilities. He goes to visit with them and says $40K can help them. He presents the checks to the organization.

Tracee says he would like Penn and Lil Jon wants Mary Lou and Trump agrees and tells the teams to pick their project managers. Trump says the winning project manager will get $20K for their charities and Australian Gold, who the teams have to do an ad campaign for, will match it for a total of $40K.

Lisa says that their team has been puppies and rainbows, solid so far. However, she’s not sure what Gary is going to be like as a leader. She thinks he needs help getting to the point and focusing.  Meanwhile, Tracee doesn’t think they have time to keep sitting around and pondering what they will do; the thinks they should just do it.

Gary and his team are still thinking of ways to create a silent movie for Australian Gold. A rep from the company comes in to talk to them.  Stephen thinks Gary is charming  but his process is mind boggling. The rep says that they’ve got some great products to highlight. The rep then goes to visit the other team. Lil Jon asks her to walk the others through the product and Marilou notes how well he is doing but Tracee thinks it’s a waste of time since they could be implementing something. Tracee wants to do a caveman story. Lil Jon says he has worked with Australian Gold before and knows they want product integration but says it’s Tracee’s call.

Back at Plan B, Gary has an idea of a vampire with a day pass who is afraid of the sun. Stephen thinks Gary is out of his element. Gary and Lisa go shopping even though Gary needs to be at the studio. Penn calls Lisa and wants to know what Gary is wearing in the scene.  Lisa suggests beach clothes but Gary wants to wear a suit. Stephen says Penn creeps him out.

The Power team walks into the studio, ready to start filming. It will have a Filnstone element. Lil Jon will be directing. MariLou notes there’s a lot going on. Tracee notes that MariLou is on 11 while everyone is on a 2 and she needs to calm down.

Tracee says being a Project manager is intense pressure. Marilou says that some people don’t recognize the flinstone in them. Tracee knows that he is a house broken caveman. Brandee is walking around in a bikini and sarong while also helping the other girls. Ivanka visits the set. Tracee says Ivanka laughed at him for an unbearable length of time as he is dressed up as a caveman.  Lil Jon thinks that Marilou needs to slow down a little bit; that her brain has to catch up with her since she moves so fast. Lil Jon is unnerved by them trying to rush him into finishing the last shot.

Back at Plan B, Penn explains what is going on to the Australian Gold rep Don. Don likes what he sees so far even though the boardroom visits make Lisa nervous. Gary wants a toy Koala bear at the last minute to Stephen’s annoyance. He is especially annoyed since Gary wants everyone to be involved. Stephen decides to be the sole director.

Plan B discusses the silent movie they just shot. Penn and Stephen debate some of the merits. Stephen thinks Penn is just saying that what they put together sucks and just wants to speed up the content.  They eventually reconcile their differences and the movie comes together.

For Power B, MariLou and Brande are freaking out because their movie looks rushed. However, it comes together.

Plan B presents their silent film to Ivanka, Donald Jr. and the Australian God reps. Gary is happy that they reacted at the right time. It is then time for Power B to present their silent movie.
Afterwards, Donald asks for their thoughts on messaging and end product. Donald asks Eric who he feels the winner is.

Donald asks Gary how the experience went. Gary says that he came into the now and did not use his past experience with Australian Gold to help with this new project. Gary also praises his team members. Stephen thinks this has been the most creative team he’s been on. Penn says that Stephen was very good with the directing. Donald says they also loved Lisa. Gary says that Lisa is a consumer commando.  Gary says that his near death experiences have helped him.

Donald asks Tracee who the star was. Trace says he came up with the idea.  Marylou says she likes her new team. Everyone is complimentary of each other.

Donald plays both silent movies again. Marilou likes theirs better since it grabs a person more. Brande says that their movie is telling a story. Gary compliments the other team on their video.

Ivanka says the executives appreciated that Tracee showcased Australia but the one negative is that they waited until the last second to showcase the product. Donald Jr. says they liked how Team B ‘s message was clear but they only focused on the bronzer. Tracee’s team wins. Trace says the charity he is choosing is American Red Cross. Donald says someone from Gary’s team is about to be fired.

Ivanka thinks that people underestimated Gary but he stepped up and it’s hard to see him in this spot. Team B is let back into the boardroom. Donald says someone is getting fired but they all did a great job. Gary says he gave instructions to everyone but they all did what they wanted. Gary says that Stephen was the director and didn’t put the product in correctly. Penn gets a reprieve and sent out of the office. Donald doesn’t like the fact that Stephen said Gary did an “amazing” job when it came down to him and Gary when Stephen tries to take back the compliment. Donald fires Stephen because he thinks he should have put the product together better since he was the director.