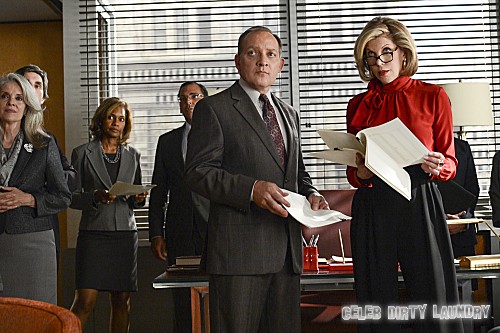 Tonight on CBS THE GOOD WIFE returns with the premiere of its fifth season called, “Everything is Ending” On tonight’s show Eli helps Peter assemble his staff in the governor’s office. Did you watch last season’s final?  If you want to get caught up before tonight’s show, there is a full and detailed recap for your enjoyment here!

On the season finale on the night of Peter’s gubernatorial election, Alicia, Will and Diane raced to a series of emergency court proceedings when Zach believed he witnessed vote tampering. Meanwhile, an unlikely source offered Cary aid to start his own firm, while the conflicted feelings Alicia had in her personal and professional lives came to a head.

On tonight’s show Alicia must focus on the firm’s efforts to prevent the execution of a convicted murderer while she secretly plans her exit from the firm with Cary. Meanwhile, Eli helps Peter assemble his staff in the governor’s office.   Jeffrey Tambor guest stars as Judge Kluger; Melissa George guest stars as Marilyn, Peter’s ethics counsel; Ben Rappaport guest stars as lawyer Carey Zepps; and renowned defense attorney Barry Scheck guest stars as himself.

Tonight’s The Good Wife episode 22 is going to be exciting, and you won’t want to miss. So be sure to tune in for our live coverage of The Good Wife — tonight at 9PM EST! While you wait for our recap, hit the comments and let us know how excited you are about the new season of The Good Wife.  Check out a sneak peek of tonight’s episode below!

Alicia and Cary are teaming together to create their own firm. They’re laughing over drinks while her husband is out celebrating his own victory. Something she needed to be reminded of. Whatever happened to her marriage? Is it officially over?

In what is either a flash forward or flashback Alicia is sitting with Diane at the execution of one of their clients. The man was claiming his innocence when all of a sudden his IV began bleeding out of his arm. The execution has to be stalled. Diane is demanding the judge stall the execution or else she sue on behalf of her client.

Diane gets what she wants. The execution is delayed for 48 hours and she has the whole firm fighting to overturn his verdict. Will, Cary, and Alicia will work from the office and Diane and Kalinda will do the ground work. However problems are cropping up.

The fourth years haven’t been discreet with setting up their new firm. Robyn is congratulating Alicia for joining them and several people were caught celebrating in one of the office rooms. David Lee is the first one to become suspicious. He pulls Kalinda off the official case to get her to look into the fourth years. She doesn’t let on she already knows but he will push her till he gets something.

Their client may prove to be innocent after all. The Assistant District Attorney had retested the DNA evidence. She didn’t feel he was guilty either. Diane tried to get her cooperation however the ADA won’t stick her neck her out. She can’t risk her job just because Diane is looking for a last minute save.

The team has found a new way to stall the execution. They’re using their defendant as a witness against the death penalty. When he was being prepped for his death the doctors kept making mistakes. They couldn’t a viable vein. The judge grants them a stay. He knows what they’re doing and is allowing it but not for long.

There is a new member on Peter’s team. Her name is Marilyn and she is a young and beautiful woman. From the start she and Eli don’t get along. He doesn’t like to be questioned and she does it easily. When she was prepping Alicia for what she should do as First Lady of Illinois, family image is important, she mentioned how Alicia’s job shouldn’t in any way interfere with Peter’s. That’s when Alicia finally tells both Peter and Eli that she’s starting a new firm with Cary.

Peter is ecstatic. He plays it off as being happy for Alicia’s dream when in truth he’s happy she’ll get away from Will. Eli on the other hand is the one to ask how her departure will affect the firm she is currently a partner in. One look from Peter and he doesn’t follow up with a second question.

Alicia gets another stay for her client in court and is in a great mood when she finds Cary and the rest of the fourth years waiting for in the car park. They want to wait to quit. They don’t want to miss out on their bonuses. Alicia doesn’t like the idea and one of the associates call her on it. It’s funny they had to wait a week just so she could finish her case but she won’t do the same for them. Cary breaks it up before it gets out of hand.

That doesn’t stop her from being suspicious. As she has every reason to be when she gets called in with the other partners. Lee knows the fourth years want to jump ship. He got the evidence from Kalinda and now the partners want Alicia to ask around. They want her help to get the fourth years to stay.

Eli brought up a good point to fire Marilyn. She is too pretty. He doesn’t want to give Peter’s enemies any ammo. Peter at first wriest him off but later he can’t help checking out her legs. He goes to Eli and tries to get his opinion on why Alicia is really quitting. Once Eli says Will could have played a part; Peter changes the subject to Marilyn. He wants Eli to promote her. The promotion takes her away from Peter’s direct office.

What none of the parents seem to notice is that something is up with their kids. Grace has been put on a list. The top ten hottest politicians’ daughters list. Zach is embarrassed. All of his friends are paying more attention to his sister now.

Cary goes in search for Alicia. He wants to know what the partners meeting was all about. She can’t risk being sued although she does warn him not to use the company’s phones. Alicia thinks she’s safe but Will may be on to her.

After all of their back breaking work they prove their client is innocent but the evidence is from a snitch that changes his testimony. The judge can’t take it. He has no choice. He allows the execution to go through.

Feeling down about the case Will makes a call. Later the DEA shows up at the execution. They came to file charges against the man in charge. He apparently has carried toxins across the borders without the proper forms. The execution has been given another stay. Suddenly out of nowhere the governor feels after two attempts they won’t try it a third time. Eddie won’t have to face another execution.

That called Will made; Alicia knows it was to the DEA.