The Hobbit: The Desolation Of Smaug Trailer Review (VIDEO)

BY Siyana Riley on October 2, 2013 | Comments: one comment
Related : Movies, Review, The Hobbit 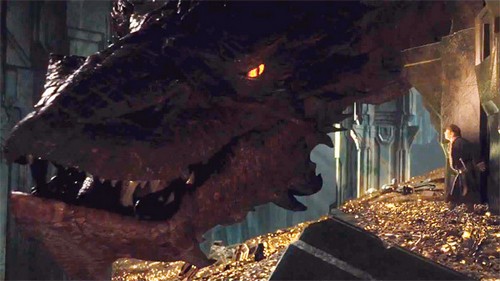 The full theatrical trailer for The Hobbit: The Desolation of Smaug went online earlier today, and to say that it elicited massive nerd screams would be an understatement. Even though the first installment of the prequel franchise, The Hobbit: An Unexpected Journey, didn’t do as well as the original Lord of the Rings trilogy, it still crossed $1 billion dollars in the worldwide box office despite receiving mediocre reviews.

Obviously, there’s little doubt that the Lord of the Rings franchise has a lot of fans, and fans that are willing to turn out for as many movies as Warner Brothers will give them. In my own personal opinion, I think Silmarillion has a more epic scope and would be a much better adaptation for a trilogy – The Hobbit just didn’t have enough substance to stretch out into three films. Regardless of my own personal opinions, the first official trailer for The Hobbit: The Desolation of Smaug was still very well received – and will probably continue to make billions of dollars.

The trailer has all the hallmarks of classic LOTR, and it looks more ‘epic’ in scale compared to the first film. Obviously, all of this is helped immensely by the presence of a DRAGON! Nothing else matters because DRAGON! And it’s made so much better by the fact that the DRAGON! is voiced by BENEDICT CUMBERBATCH! Sorry, dragons and Benedict Cumberbatch are two of my favorite things, and put them together, and I can hardly get it together enough to type.

So we have the return of Gandalf and Bilbo, and we’ll have a nice little Sherlock reunion in the form of Martin Freeman and Benedict Cumberbatch acting together as Bilbo and Smaug the dragon. In fact, we’re likelier to see the film before the third season of Sherlock even airs on our television.

Anyway, the apart from the dragon and the visual effects, we also seem to be getting some sort of love story between Orlando Bloom and Evangeline Lilly‘s characters. Umm…ok I guess. Was that there in the books? It’s been so long since I read them, but that was clearly not significant enough for me to remember.

Are you guys excited for DRAGON! and The Desolation of Smaug? Let us know your thoughts in the comments.