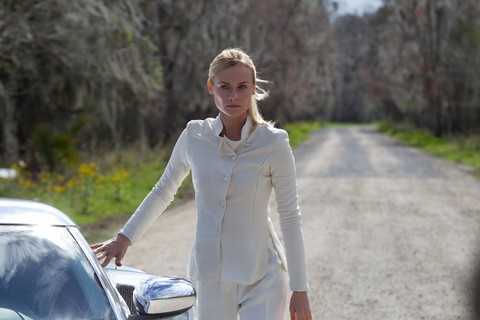 The third official trailer for The Host debuted today to mixed reviews, despite the clear attempt to focus on the sci-fi and action aspects of the story to appeal to a broader audience. The first full-length trailer that was released a couple of months ago was primarily focused on the more romantic aspects of the story, clearly hoping to interest the same audience that made the Twilight Saga such a smashing success. And with a book written by the same author who wrote Twilight, it should automatically be considered a sure-fire hit before its release right?

Well, right now the tracking on the movie seems to indicate otherwise; there isn’t much buzz being generated about the movie, which could partly be due to the fact that Open Road Films isn’t nearly as big of a studio as Lionsgate and Summit were. Of course, it’s clear that Open Road is hoping that the Host will do for them what Twilight managed to do for Summit [a.k.a bring in bajillions of dollars in cash and establish them as a major studio], but right now it doesn’t look as if it’s going to happen.

There are many reasons for this, but the main reason seems to be that most Twilight fans just aren’t that into The Host. Despite the shared author, Stephenie Meyer, most Twi-fans don’t seem to be interested in the sci-fi rendering of alien romance. As someone who’s read the book, it’s not hard to point out that the story of the Host, the plot, and even the characters are much better than those of Twilight. The film, too, looks better, with a great sci-fi director at the helm [Andrew Niccol] and an Oscar nominated actress in the lead role [Saoirse Ronan]. Just by looking at the trailer, it’s clear that Ronan could act circles around Kristen Stewart if given the opportunity, and she makes a compelling presence on screen, managing to turn even the sappiest dialogue in the trailer into something meaningful.

However, even with this advantage over Twilight, the Host is not generating nearly enough interest, especially as it’s just a month away from its release. At this same point during Twilight’s release, the buildup was so intense that book sales spiked and every little tidbit of news regarding the cast was making its way onto national news. The month leading up to the premiere caused mass fan hysteria and rabid interest in the lives of Robert Pattinson and Kristen Stewart. On the day of the release, this madness was justified as Twilight opened to a record-breaking $69 million, then unheard of for a female driven YA franchise.

Of course, we could be completely wrong and the fans are just building up momentum, in which case, please feel free to laugh at us in a month’s time. It’s unfortunate that it looks like the Host won’t do as well as Twilight, because from all indications, it looks like a much better movie with better effects, better acting, and biggest of all, a better story. But there’s still a love triangle, because it’s impossible to have a Stephenie Meyer movie without a love triangle.