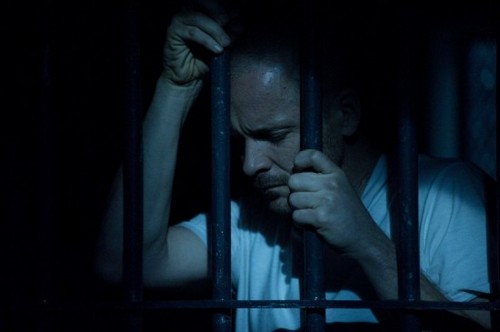 THE KILLING continues tonight on AMC with its forth episode.  On tonight’s episode called, “Head Shots” Sarah and Holder unite in their pursuit of “the voice;” Seward is offered motivation to comply with orders.  Did you watch last week’s premiere double episode?  We did and we recapped it here for you.

On last week’s show there was a survey shot of the floating bodies Linden found and that scene, folks, was slightly unappetizing.  Anyway, the bodies led the team to believe that they were dealing with a serial killer situation and, form the looks of things, I’d say were correct. But, I was expecting a twist of some sort.

On tonight’s show Seward’s role starts to heat up. Holder’s new informant, Bullet, is called upon again. More and more, there are connections between the current case and Linden’s past and the reason why Seward is locked up.  The task force shuts down a business; Sarah and Holder unite in their pursuit of “the voice;” Seward is offered motivation to comply with orders.

The Killing season three returned with strong ratings and by far has better content that season one and season two.  I really like Peter Sarsgaard as a death row inmate as he is  the reason why Linden left her old job.

We will be live blogging The Killing Episode 3 beginning tonight at 9PM EST . . . so make sure to come back to this spot and watch the show with us. Make sure to refresh often so you get the most current info!