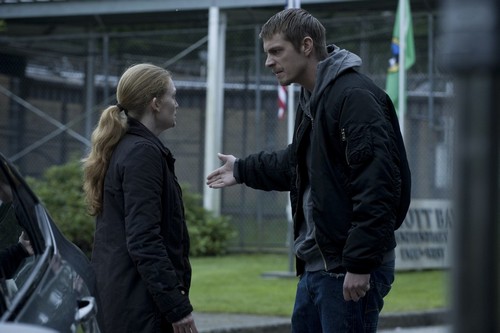 For those of you who are still reeling over the thought of AMC canceling The Killing after leaving you with such a crazy cliffhanger, well, don’t you worry your little buns off. Netflix, that online entity that supports millions of people’s TV-watching addictions, has decided to pick it up for a fourth season. While The Killing season 4 will only include 6 episodes, it’s much better than nothing. At least the story will conclude in a reasonable manner.

Cindy Holland, vice president of original content for Netflix, said in a statement, “The rich, serialized storytelling in The Killing thrives on Netflix, and we believe that it is only fitting to give Sarah Linden and Stephen Holder a proper send off. We are looking forward to offering fans — both existing and new — a series that we know is perfectly suited for on-demand viewing.”

Production hasn’t started yet and there’s no set schedule in place; but it’s never too early to start gossiping! What do you think this new and final season will entail? Will Linden still have her badge or will a much worse fate have found her? Let us know in the comments section below.