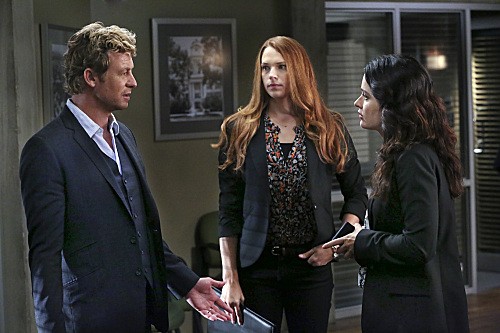 Tonight on CBS THE MENTALIST returns with a whole new episode called “The Red Tattoo.” On tonight’s show Jane investigates in the hopes that the case will provide a clue that will lead him to Red John.  Did you watch last season six’s episode 3? If you want to get caught up before tonight’s new episode, we have a full and detailed recap, right here for you!

On last week’s episode Jane reveaed that a list of fake Red John suspected he planted was stolen, and the team realized these men were in danger.  We are getting to the end of the Red John investigation.

On tonight’s show when a prominent member of Visualize is mysteriously killed, Jane investigates in the hopes that the case will provide a clue that will lead him to Red John.  Reed Diamond returns as Ray Haffner.

Tonight’s The Mentalist Season 6 episode 5 is going to be exciting, and you won’t want to miss. So be sure to tune in for our live coverage of The Mentalist — tonight at 10PM EST! While you wait for our recap, hit the comments and let us know how excited you are about this season of The Mentalist.  Check out a sneak peek of tonight’s episode below!

RECAP: It starts with this elderly man sweating like crazy with a briefcase in his hand, a man and his son go into the elevator with him; they go up to a floor, the man in the grey hair runs out of the elevator hitting the young kid on the way out, the man makes a complaint about how his son was hit by the old man. Turns out the old man died, but he mentioned he was stabbed. The man is being questioned by Wayne, Patrick and Teresa are talking to a a man of hotel security. An older man from Visualize arrives at the scene of the crime, it turns out that the man who was murdered was a part of them and they believe this was a hate crime. Teresa mentions how she can’t let civilians help on a investigation, but that Patrick is special. Patrick is going to enter the elevator until the older man comes up and goes in the elevator with and asks him about how’s the Red John case going by. The man mentions how Visulize are studying on Patrick, Patrick and the man talk to each other; the man mentions how he finds Patrick thinks that he’s far more smart than people. Patrick isn’t phased by anything this former cop says, because well he’s just awesome.

Teresa is talking to Grace about Cooper and is wondering if he’s lying, Teresa is going to make up with Cooper; but she wants Grace to take care of other things. Teresa asks if Patrick wants to go talk to Cooper with her, though Patrick’s got other plans; he heads to a gym. Patrick arrives at the gym, while there Patrick talks to a man. Cho talks to a woman and about a man, a blonde woman appears out of no where to talk to Cho about the pricing at the gym. She mistake Cho for a worker at the gym, Cho and Patrick want to talk about the man who was murdered named Chad. The blonde woman mentions how she’s embarrassed about mistakens Cho as a worker, when the woman asks about the murder Cho plays it cool and tells her where to find a worker to avoid the topic. Teresa is talking to Cooper about Chad and who would want to kill him. Teresa receives a call from Wayne, it turns out that another man was murdered by a knife, it seems it could have been done by the same criminal. Patrick is talking about Chad to his partner at the gym. Patrick mentions how Chad was a member of Visualize the cult, though it seems that Chad’s partner never knew. Patrick goes and talks to the man coaching his daughter about Visualize, the co-owner of the gym appears and mentions that he did know Chad was with Visulize, it turns out the second man who was murdered named Frost used to work for the gym.

Grace is on the phone with two officers, telling them to bring the gun that they’ve found to forensics. Wayne mentions that the man Haftner shouldn’t be involved with the investigation, due to the fact he’s one of the Red John suspects. Teresea says that they have no choice, when Haftner arrives Teresa, Grace and Wayne explain what they’ve already found out for the investigation. Frost was shot in the car, at the same time as Chad was killed in the hotel room. Haftner is sarcastic the entire time, he’s a complete dick and I hope he dies sometime soon. Teresa talks to Cho about the investigation, Wayne appears and talks about how a man died after leaving prison. Cho is interogating the now owner of the gym about the people who’ve died, the owner mentions how Chad was Parkman’s mentor for a long time. Grace arrives with Frost’s call history, Patrick decides that he’s going to go talk to Haftner, though Teresa belives that it would be better for her to go. Wayne and Cho are getting food at vendor nearby, Wayne starts talking about his marriage to Grace; Cho doesn’t want to hear anything about it, and then loses his appetite. Wayne mentions that he owes Cho big time and that he’ll find someone for him to love. Haftner is looking around the apartment, Teresa and Grace come up and ask about how Haftner called Frost before he died. A spider appears on the wall, it makes Haftner feel paranoid and get very nervous, anyways Haftner believes that there’s also a fourth man in the murder. Chad wasn’t killed instantly after being stabbed, he died after a hemmorrhage. Teresa wants to know how Haftner got the results to the autopsy, he mentions that he still has friends in the CSI. Haftner mentions that Teresa and Grace shoud stay away from Patrick or else they’ll end up hurt in a way, they don’t listen to him at all. Oscar walks into Wayne’s office, to show the file on the Kirkland shooting; they talk about the investigation, it turns out a young kid ended up having to shoot Kirkland after Kirkland tried to escape. Oscar tells Wayne that he can keep the copy of the file, because it was meant for him. Cho appears to talk to Wayne about Kirkland’s shooting, Wayne doesn’t buy it due to the fact that Kirkland was shot six times in the back. The blonde woman from the gym appears, she talks to Grace and asks if Cho is around and how they met. The woman introduces her self as Kira, she asks Cho if he’s free to have a cup of coffee; Cho agrees and says he has time. Teresa is talking about how Chad died from the hemorrhage after being stabbed to Patrick, instantly Patrick solved the case easily. Patrick asks who the woman Cho left with, it seems that Patrick believes she has something to do about this probably.

Cho is talking to Kira while having coffee, Kira asks about the police work he does; Patrick appears out of nowhere and eats her muffin. Patrick finds out that Kira ended up bugging Cho, it turns out she was a private investigator. Before Cho lets Kira leave, he wants to know who set her up to having her listen in on him. Cho was about to arrest her, it turns out that she was hired by Visualize, turns out that Patrick put the bug in her purse; he put a coin into the coffee instead. Teresa arrives at the scene of the murder, with the two people who work at Visualize standing there. Patrick brings Wayne and Cho to the scene of the crime, somewhere outside nearby. Patrick arrives at the hotel room with a stretching band, Chad and Frost were in fact lovers; Chad was a mentor with Frost and from that relationship it went further. It turned out that Chad had to bring Frost a whole bunch of money in a brown paper bag, or else Frost would say that he molested him. Chad shot Frost, though he didn’t know that Frost would have a knife and end up being stabbed. Chad then ran into the hotel room with the gun, he took a rubber band and shot the gun further away from the scene of the crime; Wayne and Cho standing in the alley proved Patrick’s theory. Patrick shoots off and apple, which hits the wall. It turns out that the trick was that there was no trick to how the murder happened.

Patrick completely solved the murder, it seems that Visualise hopes that the police office could be more discreet; Patrick mentions how a woman admitted to Visualize bugging Cho, it turns out that Patrick might have been wrong, it turns out that Red John was the one who wanted to bug Cho, Patrick wants Grace too track the bug. Kira is shown at her house, just now her doorbell rang and she’s about to open it. She goes to the door and it turns out that she’s struggling in her home, being choked and more, Patrick and Teresa are trying to get to her house as soon as possible. The cops arrive at the house and open the door, it turns out that Red John left, but Kira is horribly injured. Patrick gets out of the car and starts running into the house, he finds Kira and asks who did this to her. Kira whispers into Patricks’ ear who hurt her, she then dies. Patrick wipes is hand over the blood on her shoulder, because she probably whispered that it was his blood on her shoulder. Patrick is wiping his hands on the handkerchief, she mentions that John has a tattoo on his shoulder that’s three dots.