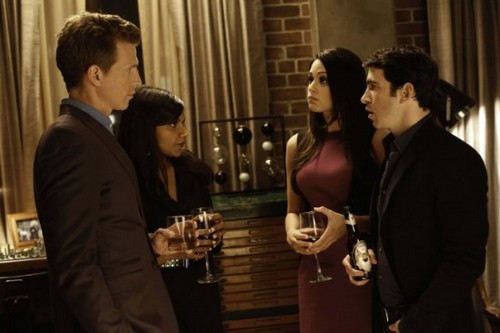 Tonight on FOX The Mindy Project airs with a whole new episode called, “Pretty Man.”  On tonight’s show Mindy tries to avoid a male prostitute (handsome man) until she realizes she needs a date for Danny and Alex’s dinner party.  Did you see last week’s episode.  We have a full and detailed review for your enjoyment.

On last week’s show Danny got caught sneaking out the office supply of painkillers for his troublemaker childhood friend Stevie (guest star Bill Tangradi), who had instant chemistry with Mindy. Meanwhile, Mindy was in for a shock when Heather (guest star Ellie Kemper), Josh’s ex-girlfriend who ruined Mindy’s Christmas party, showed up at her doorstep to ask for her blessing to move into her apartment building. Mindy said “yes,” but immediately began to plot ways to ruin Heather’s rental application.

On tonight’s episode when Mindy decides to have a night out by herself in the city, she hits it off with a stunningly handsome man (guest star Josh Meyers) who turns out to be a prostitute. Horrified, Mindy tries to avoid him until she realizes she needs a date for Danny and Alex’s dinner party, so she gives him a makeover a la “Pretty Woman” in the all-new “Pretty Man” episode.

Tonight’s episode looks like it is going to be fun and you won’t want to miss it, so be sure to tune in for our live coverage of FOX’s The Mindy Project at 9:30PM EST! While you wait for our recap hit the comments and let us know what you think of The Mindy Project Season 1, so far!

Why does all good things happen to Mindy on a train? When she tried to get off at her stop she’s blocked by a cute commuter carrying a large box she later finds out is a stroller. Despite trying to insult though he asks for her card. Not to check her credentials but to ask her out later. She says sure but when she tries to leave the train again, she’s block again This time by a guy with a snake.

Mindy and the commuter are on their date. Their joking around and nothing seems out of the ordinary until she captures him praying before eating. He says it’s an occupational hazard because he’s a minister. She thought it was joke but nope it’s not.

Mindy gets, her coworker, Danny’s opinion before she meets her minister Casey again . Danny, who happened to be raised very religiously, assures her he’ll visit the church with her and check this guy. Mindy was pretty scared her potential boyfriend could possibly be a cult leader. While she’s getting ready to meet her minister, however, she’s confused over what to wear. In the end she took inspiration for church clothes from Tyler Perry’s movies.

At church though Danny was the one confused. Casey’s church has Moby as a DJ and also Casey is not afraid to sing Bruno Mars instead of hymns. Mindy loves his church but Danny tells Casey “it was too much” before Mindy shoos him away. Mindy tells Casey that she can’t wait for their next date but he turns her down. He doesn’t feel she’s charitable enough. So leave it Mindy to volunteer her OBGYN services to a prison. In her mind that’s how she’ll prove to be a good person.

On the way to the prison Morgan, their resident ex con, tries to give them some pointers only for it to fall on deaf ears.

The visit does not go well. Mindy gets bitten, Danny is propositioned over his genitals, and one of the nurses runs into a former acquaintance. One highlight was Mindy made a friend with one of the prisoners. They bonded over the Real Housewives. Mindy gives her new friend gifts and candy which unfortunately the inmate drops when she rejoins the crowd. The other inmates rush to get the candy and suddenly a prison riot breaks out. The guards are out trying to control the crowd but are unable to stop one of them from cutting Mindy’s hair and another from sitting on Danny.

Mindy is crying and feeling bad that she caused all of this in order to impress a guy. Danny assures her that its similar to Christianity so she be to hard on herself. Still the one person that’s truly ticked off is Morgan. All the way back to the city, he chastises everyone in the car for ignoring his rules.

Surprisingly when Mindy is out with her brother, she runs into Casey and his little brothers from Haiti. He hears from her bother how she volunteered at a women’s prison in order to prove she’s a good person. Casey feels sorry about it and later text her with her another date. Mindy downplays it but of course she’ll accept. Why? That’s just Mindy.

In next week’s promo, the minster seems to be gone but has a male prostitute taken his place?