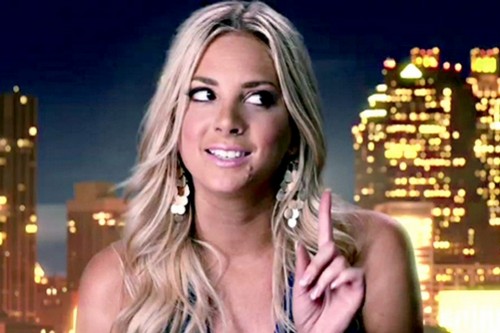 The series follows the next generation of the city’s trailblazing young professionals who are hungry to achieve their dreams and find love as they struggle to resolve heartbreaks from the past. Aggressive in both their professional and personal lives, each hopes to make their mark in the cutthroat industries of fashion, music, event planning and business while taking advantage of Atlanta’s hot social scene. Coming from a variety of backgrounds and bringing their own distinct perspectives, this new circle of the city’s rising elite.

On tonight’s show welcome to “The A,” Baby! They don’t call this town “Hotlanta” for nothing. In the premiere episode, aspiring singer Africa invites Emily to attend her friend Alex’s college graduation celebration. Things start out friendly enough but tensions soon flare as Emily, owner of a trendy Atlanta fashion boutique, takes offense at Alex’s admission that she dreams of becoming a trophy wife. Later at her birthday party, Africa entertains two potential suitors, Vawn and Tribble, but her hopes of making a love connection are dashed when her feuding friends Emily and Alex disrupt the party. Such is life when Atlanta’s hottest come out to play.

Tonight’s episode is going to be filled with lots of  drama that you won’t want to miss, so be sure to tune in for our live coverage of the show tonight at 10 PM EST! While you wait for our recap hit the comments and let us know how excited you are about the premiere of The New Atlanta! Also we have a sneak peek video of tonight’s season 1 premiere below!

New Blood in the Old South…

There is Emily. She owns Raw Denem. A clothing store that she’s not afraid to admit has taken the place of a man in her life. She’s a Southern Jewish Redneck. She considers herself real all except her nose. She had it done.

Tribble is one her best friends but there are no sparks between them. Never fear though she’s still on the lookout even if she does find dating sucks.

There is Africa. She is an actress/model/singer. Her singing is her great love. She’s been in and out of music studios for the last six/seven years. She’s not from Atlanta but still is a southern lady. She came from Alabama.

Atlanta is proving to be lucky for her so far. She found a producer who has had some success with other artist and he’s doing his best to only get the very best from her. However she does find him attractive. She won’t want to act on it but will she? Especially if he makes her successful? He’s not pushing anything and as a matter of fact he tries to reinforce her confidence. Unlike other producers who would knock an artist back in order to get an advantage.

There is Alex. She’s from a well to do family and still lives at home. Growing up she was surrounded by mirrors and that made her accept herself for who she was instead of trying to be someone she can’t. She’s just finishing up her last semester at university and can’t wait to start celebrating.

Some could say she’s been celebrating. She’s a self-confessed daddy’s girl. There are times her dad doesn’t even know when he gives her gifts. Such as the chest she loves. Whether it was implants or not she never fully confirmed but odds are they are as real as Emily’s nose.

Emily experienced a setback with her store. Someone drove their car throw her store and the proceeded to rob her. This the same story that’s been her life for the last two years. The robbers had well thought out plan. They were was about seven of them and they ransacked the place.What makes it worse is that she was just thinking about opening a second store.

Vawn is Africa’s producer. That’s right the attractive one. His life is split in two. His music and his son. He only gets to see Jevon on weekends though he has the highest respect for Jevon’s mother. Jevon would like to see his parents back together. But that’s not going to happen. At the time Vawn wasn’t ready to open himself for a relationship. Now that he is, he has such high expectations who’s ever going to fill them.

Africa is going to be the one that unites the girls. She’s going to Alex’s graduation party and she invited her friend Emily to come along.

The dinner is horrible. Emily and Alex do no flow together at all. Alex admitted she wanted to be like her mother. Her mother had raised her to be a trophy wife. Emily doesn’t understand that at all much less why Alex admitted that with pride. So she begin to question things until it appears confrontational. Alex’s friends immediately come out to defend Alex and Emily is feeling like they’re coming at her.

Africa has to pull her aside to talk. She personally doesn’t mind that Alex wants to be a trophy wife. That’s not any of her business but she understands where Emily is coming from. They weren’t raised that way. Still now is not the time to take issue with Alex for wanting to be like her mother. The two decide to leave the dinner early.
One of things that nagged her the most was after one of her questions Alex explained that women that worked 9-5 came home tired and unable to look after their family. She on the other hand would be there for her husband down on her knees if she has to.

Thank the God that dinner is over. By the next day that fiasco hadn’t put a dent in Emily and Africa’s friendship. Africa had come by her store to help with the clean out. Emily even wants to set Africa up with Tribble. Africa has never dated a white guy before. She’s only dated black guys but she does need a date for her own birthday party.

This the first time she’s celebrated her birthday. She grew up as a Jehovah Witness. It’s really her friends that have pressured her to celebrate it. Which may just prove difficult. She invited both Alex and Emily. Emily walked into the party and completely ignored Alex. Alex doesn’t like to be ignored and Emily doesn’t like Alex. She knows they can never be friends.

The two women are with their own friends at the party. Emily is still ignoring and Alex and her friends are bashing. Africa knows her friends don’t all get along but she assumed they would be on their best behavior for her birthday. It’s starting off as good birthday. Both Tribble and Vawn came.

She shouldn’t have put some trust in friendship. Emily and her friend begin to make fun of Alex. Really it was her friend that started it but one of Alex’s friends heard them. The friend told Alex and we leave them at Alex going over to confront Emily.
Couldn’t they have all just gotten along?