BY Jessica McCain on October 9, 2013 | Comments: one comment
Related : Recap, Television, The Originals 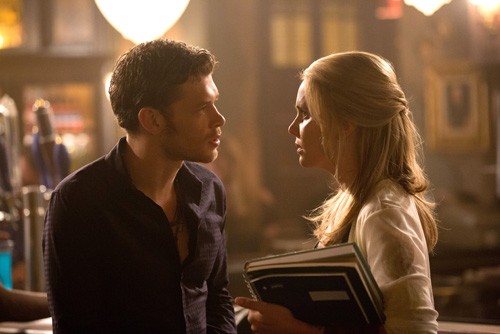 On last night’s new episode of THE ORIGINALS called, “House of the Rising Son” the show opened with Rebekah arriving in New Orleans and deciding the best plan was to kill several of Marcel’s creatures of the night. This was to prevent any harm from coming to a innocent girl (but I honestly think she did it for the fun of it). Rebekah is driving and using her phone (tsk, tsk) she leaves a message for Elijah (who you know as the guy with the tree dust covered dagger protruding from him in the box) she tells him she is worried about being in New Orleans but nonetheless she is there.

Rebekah is at her family home and upon entering she assumes Haley is the help and tells her to go get her luggage (oh my wow). Rebekah realizes her mistake and ask Haley where Elijah is after she realizes she is the one Klaus knocked up with his child. Haley tells her she doesn’t know. Klaus hearing all the fuss walks in to see his sister and ask her if she remembers the home. Rebekah does indeed remember as we see through a flashback of what happened to one of her many suitors.

Klaus informs Rebekah in his sarcastic glory that finding Elijah did not make his to do list for the day unfortunately and he is preoccupied with finding out how to get his power back from Marcel.

Rebekah and Haley start searching for Elijah although Rebekah is quite confident he is stuffed in a box with a dagger in him. (Very perceptive this girl). Rebekah shows Haley the coffins that Klaus like to keep his siblings in and tells her all about Klaus and how he does his business. Rebekah ask Haley why she is still there. Haley explains there is some kind of curse on her thanks to a witch named Sophie and if she tries to leave she will be killed. Rebekah expresses what a shame that is and tells Haley she should look for a way to get rid of that curse and then get the hell out of dodge which is exactly what Rebekah intends on doing as soon as she finds Elijah.

Sophie is cleaning up the bar she works at when she hears the door. When she turns around nobody is there. Assuming the worse she yells out to who she thinks is Marcel that she had nothing to do with his guys being killed. Rebekah jumps out from somewhere and grabs her and tells her she wants to know where Elijah is.

Rebekah wants her help. Sophie tells her she can’t use her magic because if she does Marcel will kill her. Rebekah ask what Elijah has to do with it and why klaus thinks he can help with his trouble with Marcel. After some confusion on Sophie’s part Rebekah explains that not only did Klaus sire Marcel but that he was also like a father to him.

Klaus finds Marcel at a bar drinking and watching a pretty blonde waitress. Klaus invites her over and flirts with her a bit. Marcel ask her to meet him back at the bar at nine that night. She says she will think about it.
Hayley buys wolfsbane from a witch. Haley tells her she’s just trying to kill a wolf. The witch looks down at Haley’s stomach and guesses correctly that she is pregnant with a baby wolf. When Hayley leaves the witch calls someone and says to tell Marcel that there’s a wolf in the quarter. (Marcel must have all of New Orleans supernatural on his pay roll).

Marcel takes Klaus where he has a guy and girl tied up in the back of a van. Marcel informs them they have been turned and that they either drink blood and are immortal or that they don’t and die. Marcel tosses a coin at tells them whichever one gets the coin will live forever. The boy can’t bring himself to do it and tells the girl they both should just leave the coin where it is. The girl instead decides to grab it she then tells the boy he would have done the same. Marcel reaches out and proceeds to break the girls
neck. Marcel then zips her into a body bag. Marcel tells Klaus that he doesn’t like people who betray their friends. (Marcel giving Klaus a friendly reminder?)

Rebekah is watching the street from a balcony when Marcel appears he asks if she’s there to teach him another lesson. Marcel wants to know why she’s there and she tells him that she’s worried about Klaus, and she knows that he is as well. Rebekah then tells Marcel if she finds out that he harmed Elijah he won’t need to worry about what Klaus will do because she will kill him.

Marcel is back at the bar and Klaus is there. Marcel informs him he does not want to be
part of any of their family drama and that Klaus needs to reign Rebekah in. Klaus tells Marcel he has a better chance of draining the Mississippi with a straw.

Haley is about to drink the wolfsbane but she has a moment of hesitation. It’s in that moment that some vampires show up. Haley throws the wolfsbane in the face of one of them. But two more quickly come at her. Rebekah snaps the neck of one and rips the heart out of another.

Klaus shows up and ask Haley what she was doing in the French quarter. Haley tells him she was buying poison to kill his baby. Klaus gets pissed and slams her up agains the wall choking her. Rebekah jumps in the middle of it and tells him to stop. Klaus has tears in his eyes. Rebekah tells him it’s ok for him to want something. That’s all her and Elijah have ever wanted from him. Klaus admits to Rebekah that he gave Elijah to Marcel because Marcel was worried about more than one original being in town. Klaus tells her it was the only way he could think of to keep his promise to Elijah that the baby would be safe.

Rebekah is on the porch and Haley comes out to thank her for saving her earlier. Haley also gives her two daggers she found under Rebekah’s coffin and tells her to go and find Elijah.

Marcel is out with the blonde. Rebekah shows up and ask him where Elijah is. When Marcel feigns knowledge of his whereabouts Rebekah gets pissed and slams him up against a wall and threatens to kill him. Marcel tells her that she won’t. Rebekah then grabs Cammie and holds the dagger to her. Marcel relents and tells Rebekah he will take her to Elijah.

He takes her to a house. Marcel shows her the coffin. Rebekah tells him to invite her in. Marcel tells her that the lady of the house has to do that. Davina invites her in. Rebekah runs over to the coffin and tries to take the dagger out. Davina warns her not to. Davina ask Marcel if Rebekah is old. Marcel tells her she is one of the Original’s and can’t be killed. Davina seems unbothered by this and states that it is time for Rebekah to go she then slams her into the ceiling a couple of times and then sends her flying through the window.

When Rebekah regains consciousness she is in a bed and Marcel is there. Marcel informs her that what once was hers and Klaus’s belongs to him. Marcel tells her to stay away from Cammie. Marcel leaves.

Klaus sees Haley sleeping and checks to see if she drank anymore of the wolfsbane. Haley wakes up and tells him she didn’t.

Klaus wants to know where she is but Rebekah can’t remember because Davina wiped her memory. Rebekah tells klaus she will do whatever it takes to get Elijah back and Klaus agrees with her.

Marcel is talking to Davina about the Originals. Marcel tells her she needs to figure out a way to kill a Original.

Curious about next week’s episode celled, “Tangled Up in Blue?”  Check out a sneak peek below!