The Originals Season 1 Episode 3 REVIEW “Tangled up in Blue” 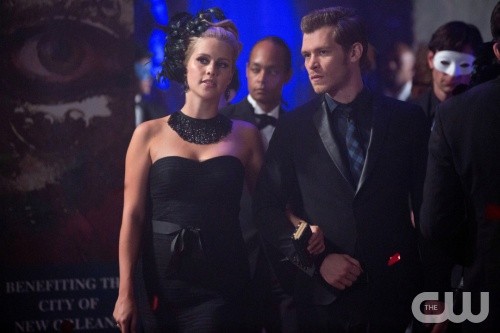 On episode 2 of THE ORIGINALS called, “Tangled up in Blue,” Haley was reading some of Elijah’s old diaries. We learn that the time frame for the entry is August of 1959. Elijah is pretty much discussing Klaus and Rebekah’s behavior. Haley realizes they are still the same creatures of habit now.

Speaking of Klaus he is outside burning some bodies. Rebekah is upset that Klaus killed the vampires that were after Haley without her. Klaus explains that it was his responsibility because they tried to kill Haley and his child. Rebekah then ask Klaus if he even has a plan. Klaus has two plans in fact a Plan A and a Plan B. Plan A is the only one he is willing to share with Rebekah and it involves the fact that Marcel is Klaus’s friend and that all he has to do is gain his trust in order to get Elijah back. When the time is right of course. (Something tells me that time is upon us).

Marcel is trying on a new suit. Thierry and him discuss the 10 Nightwalkers (six of which Rebekah took out herself) that have been murdered since the Originals have returned to New Orleans. Klaus picks this moment to walk in and ask Thierry if he feels bad about the ones he killed. Thierry gets upset and accuses Klaus of killing more than he has admitted. Klaus starts toward Thierry. Marcel jumps in between them and explains that klaus is his sire and guest and that there has to bE peace because he won’t allow anything to happen.

Marcel ask Klaus if he is coming to his party tonight. Klaus tells him he is. Klaus then ask for Elijah. Marcel tells him he cannot return him because his children of the night are uneasy about the Originals being back and if he returned Elijah he would look bad as a leader.

Klaus calls Rebekah and tells her that Marcel declined to give Elijah back and so now it’s time for Plan B. Klaus is going to start a war. Klaus tells Rebekah she needs to deal with Sophie. Then he hangs up.

Klaus walk into a room where the newbie vampire is. The newbie is finding it difficult to drain the guy tied up of his blood. Klaus finds no problem and picks up a pitchfork and rams it into the guy. Klaus the compels the newbie to finish the job and drain him already.

Rebekah meets up with Sophie and ask her how it became known that Haley was in the quarter. Sophie says she doesn’t know. Rebekah and Sophie enter the magic shop. Rebekah ask Katie if she told anyone else about Haley. Katie insist that she didn’t. Rebekah decides that perhaps violence is the best course of action and begins to choke her. Katie finally admits to it and tells Rebekah she is in love with someone who works for Marcel. Thierry of course. Katie also lets Rebekah know she has no idea what their plan is.
Rebekah calls Klaus and tells him what she found out. Klaus has come up with another plan.

Klaus and Rebekah are meeting with Sophie. Haley is out of sight and listening. Klaus wants Sophie to do a locater spell to help him find Elijah. They ask her about Davina and Rebekah tells Sophie about the first time she met her and how powerful she is. They decide that they will use Katie as a distraction so that Sophie will be able to find Elijah ( I thought they already knew where he was…..Davina’s house).

Klaus talks to Marcel about the witches and the fact that they are getting bold.

Rebekah is talking to Cammie at the bar. Rebekah tells her about Marcel’s charity event that is being held that night and then ask her if she would like to go.

Rebekah calls Klaus and tells him that Marcel will definitely be distracted tonight because Cammie will be at the party. Klaus tells her that they are about to find out if the witches are on their side.

Thierry goes to the shop Katie works at and goes in by himself. Thierry tells Katie that he has to make it look,convincing so Marcel won’t know that they are together. Klaus sends in the captive from earlier he is now a vampire. Klaus tells him to attack Katie which will cause Thierry and his crew to kill a vampire which is against Marcel’s rules. The vampire attacks Katie and Thierry kills him. Klaus is smug and pleased that his plan worked.

Rebekah and Klaus show up arm and arm to Marcel’s party with Cammie not to far behind. Klaus and Cammie exchange some pleasantries and then Klaus tells her not to be fooled that he is the devil in disguise. (Sounds legit).

Marcel is talking to Rebekah and tells her that it’s cute that she brought Cammie and that jealousy looks good on her ( this guys ego is huge). Cammie calls Rebekah a bitch, Klaus laughs. Klaus is about to tell Cammie something but thinks the better of it when Marcel starts over and Klaus walks away.

Haley is walking around the pool at the house. Sabine comes up to her and tells her she is there to keep a eye on her for Klaus. Sabine offers to give her something to help her relax and tell her the sex of the baby. Haley is reluctant at first. (It’s a little girl).

Marcel and Cammie are dancing when of his children of the night come up to him and tells him what happened in the Quarter. Marcel becomes enraged, grabs Thierry and ask him what in he hell he did. Cammie sees it all.

Katie is crying. Katie tells Sophie she wants to try and save Thierry. Sophie says she wants to save her people. Sophie tells her there is a way to do both. Sophie and Katie cast a spell that brings Davina out of her deep sleep. Davina says Marcel’s name and then says something is coming. Davina can feel the magic that is being used.
Thierry tells Marcel what happened. Marcel tells Thierry that he isn’t to kill his own kind especially for a witch. Klaus hands a envelope to Marcel that he claims he got at Katie’s. It is the spell to make daylight rings. Marcel looks Thierry and tells him that a friend would not steal or betray him. Marcel sentences Thierry to one hundred years in the Garden.

Rebekah tells Sophie that the spell she is about to do is the only way to save Elijah.

Marcel walks Thierry out of his party and they see Katie down by the road destroying the block. Katie sees Marcel and attacks him. Davina is trying to protect Marcel. Katie knocks Marcel down and it causes Davina to fall to the ground in pain as well. Before Katie can stake Marcel Klaus comes to the rescue and snaps Katie’s neck. Sophie’s spell quits when Katie is killed and she tells Rebekah. Rebekah tells her not to risk it with Davina there and then she throws all of Sophie’s tools and parchment on the ground. Rebekah tells Sophie that she is willing to die but they she will not risk Haley and the baby.

Marcel stands up and looks at Thierry holding Katie’s dead body. Marcel then looks over at Klaus and nods at him thanking him for saving his life.

Marcel has Thierry chained up in shackles and ask him if Katie was worth it. Thierry tells Marcel that he loved her. Marcel stakes him to the wall and tell his minions to seal him and let him rot. Marcel is on the balcony and klaus brings him a drink. Klaus tells him he is sorry about what happened. Marcel tells Klaus that his trust was misplaced. Klaus knows that doesn’t make it any easier. Marcel tells Klaus that he is going to return Elijah and that it is the least he can do for him after what Klaus did for him. (Well played Klaus).

Klaus goes to see Cammie and glamours her into believing that she had a perfect night with Marcel and that nothing bad happened.

Klaus tells Rebekah that tonight was perfect and that he has Marcel right where he wants him and soon he will also have Davina. Rebekah is upset that he killed Katie and that he always gets what he wants no matter the coat or who gets hurt.

Marcel walks in to Davina’s and she is relieved to see that he is okay. Marcel tells her that Klaus saved his life and so he is giving a Elijah back. Davina tells him he isn’t at least not until she finds away to kill the Originals.

Sophie buries Katie. The other witches tell her they knew an alliance with the vampires was a bad idea.

Sabine was possessed while she was checking on Haley and the baby. Sabine has been googling it but can’t find anything on it.