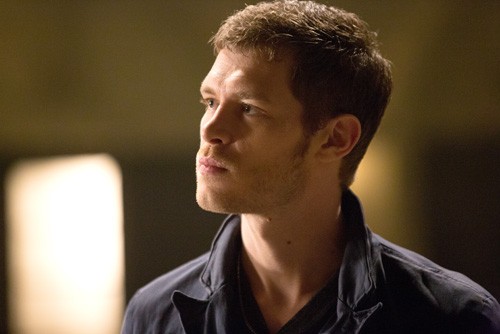 On episode 5 of THE ORIGINALS called, “Sinners and Saints” Davina is with Elijah. Davina tells him she has heard he is honorable.

Elijah agrees with this statement and then tells her he followed his brother to a war in New Orleans. Davina tells him he looks terrible Elijah tells her that’s what those mystical dagger will do to you. Elijah explains to Savina that he feels the two of them together would be able to stop the war. Davina is curious as to why she should trust him. Elijah reasons that even though he is extremely hungry he hasn’t tries to attack her. Elijah states that he doesn’t war from children. Davina pricks her finger and offers it to Elijah. Elijah wipes her finger across his mouth.

When morning arrives Klaus and Rebekah find Sophie and Klaus demands to know why she let the witches attack Haley. Sophie claims that she didn’t do it because she is linked to the wolf and the reforms she would have been attacked to. She tells them that Sabine did it because of some vision Sabine had that this hybrid baby would bring death to all the witches. Klaus tells Sophie he is growing fonder of the baby by the minute. Rebekah informs Sophie that Elijah is talking with Davina and that she is to keep Haley safe. Rebekah wants to know just how bonkers the witch faction is. Sophie suggest she hit Davina up for the 411. Sophie tells her the only reason she came back is because she wanted to be a chef. We get a flashback of Sophie talking to her sister about a ritual called the Harvest (I’m sorry but when did this turn into Buffy?) it is done every 300 years. When Sophie interrupts the ritual we see that some girls have already had their hands sliced and they are bleeding. They pick four girls.

Before we can learn anything else Marcel calls Klaus (worse timing ever.) Marcel tells Klaus about the witches killed by the wolfs (he already knows, try to keep up Marcel.) he wants Klaus to come along because his blood can cure wolf bites. Klaus agrees. When they hang up Marcel picks a house from the ones he is looking at. Marcel has found the house he wants. (For Davina?)

Sophie tells Klaus he can’t go that she has to gather the bodies and bury them by sunset or the power they have will be lost. Klaus tells her no can do he doesn’t need this linked back to him or Haley. Klaus makes it clear that she is to stay put.

Marcel goes to the church to see Davina. The priest tells him he isn’t happy that Marcel is using her to control the other witches. Marcel could careless what makes him happy.

Elijah finds a violin and ask Davina if she plays. Davina says no. By the time Marcel walks in Elijah is in his coffin. Davina tells Marcel to shhhh she is doing a spell. Marcel tells her he is moving her tonight. When he leaves Elijah gets up and ask why she didn’t out him to Marcel. Davina says it’s because she isn’t done talking to him. Davina explains to Elijah why she is helping Marcel. Apparently the witches cannot finish the reaping without her and if they don’t finish it she will lose her power. Elijah wants to know how they would go about finishing. Davina tells him she would have to die.

Haley finds Sophie in the cemetery and tells her if she is going back out in the bayou she is going with her. Sophie disagrees. Haley reminds her that the wolfs like her more than thE witches. Rebekah shows up and tells them both that they are idiots. Haley tells Rebekah to call Klaus and tell him to distract Marcel until they get done.

Klaus does just that by talking to Marcel about his hook up with Sophie. Which also brings about how the witches got upset with the priest when he would no longer help them and put a curse on his nephew Sean (Cammie’s brother). Klaus does not tell Marcel he already knows about Sean.

Elijah talks with Davina while playing a violin. Elijah finds out that Sophie was involved with the Harvest and seems very shocked by that.

Rebekah ask Sophie about the Harvest while they are trouncing around the bayou. Sophie reminds her that Klaus told her to wait. Haley is looking around when they hear a noise and see someone. He looks at them notes that Rebekah is a Original and then vrooms off. Rebekah calls Klaus and lets him know what just happened. Klaus thinks it was their informant Thomas. Klaus tells Rebekah he needs a distraction. Rebekah tells him she will be there in a flash.

Davina tells Elijah that her mother wouldn’t stand up for her and allowed her to be led to the slaughter. Marcel swooped in and saved her.

Marcel is talking to Klaus and tells him that the priest asked him to stop the Harvest and since he has a rule against hurting kids he was willing to help. Marcel tells Klaus that he is the one that saved Davina.

Davina tells Elijah that as each girl died she passed her power to the others. Since Davina was the last one left standing she got all the power.

Klaus knows what a powerful resource Davina is for Marcel. Marcel insist he is just protecting her from the other witches. Rebekah shows up. Klaus goes to pee. Marcel ask if she is there to take Klaus home. Rebekah tells him there is no other reason she would be there. Rebekah tells Marcel he doesn’t want to get on her bad side. Marcel mimics her. Meanwhile Klaus finds Thomas and snaps his neck.

When Klaus catches up with Rebekah at the bar she has lost track of Marcel. Rebekah thinks Marcel knew they were stalling him. Klaus thinks it was Marcel stalling them.

Marcel shows up to get Davina. Marcel picks up her suitcase and tells her he is leaving Elijah as a gift for Klaus. When they walk out Elijah comes out of the coffin. Davina stops all of a sudden and tells Marcel something is wrong. The church starts to shake. Davina tells Marcel to take her back upstairs. Davina falls and Marcel catches her. Elijah has his hand out like he is controlling something. Elijah is smiling. Marcel puts Davina in bed and leaves. Davina sits up and calls for Elijah. He appears and tells her he is glad she decided to stay. Davina ask if he will go back on his promise. Elijah assures her he won’t and tells her he is sorry her family betrayed her.

Klaus is waiting outside for Marcel and tsk tsk’s him for distracting him so that he could hide Davina. Marcel call Klaus a bitch. Klaus pushes Marcel down and tells him he will take Davina when ever he likes. Marcel charges him and is pushed down again. Elijah is standing there he tells Marcel if anyone is going to teach Klaus a lesson it will be him. Klaus looks disappointed and Marcel looks shocked.

Rebekah is talking about family when Klaus walks in with Elijah not far behind. Rebekah runs to him and gives him a huge hug. Haley slaps him and then tells him welcome home.

Next we see a flashback of Sophie with her sister assuring her that they will get Monique back. That they will seal off the cemetery from the vampires and slit Davina’s throat themselves. Sophie tells her sister that it’s there little secret.

Elijah is telling Klaus that they used Haley’s presence to get him down there where they knew Klaus would then get Marcel out of their way. Elijah tells them Sophie is willing to do whatever it takes to get Monique back and that Sophie’s sister gave her life to make sure it happens.

If you want a sneak peek video & synopsis of next week’s episode, “Fruit Of The Poisoned Tree” check out the preview of episode 6 below!

“When Klaus (Joseph Morgan) discovers Hayley’s (Phoebe Tonkin) life is being threatened, he goes to extreme lengths to protect her and their unborn baby. Having a difficult time dealing with the tragic events of her past, Cami (Leah Pipes) turns to Father Kieran (guest star Todd Stashwick) for guidance. Feeling as though he can trust no one, Marcel (Charles Michael Davis) visits an old friend to seek out some advice, while Davina (Danielle Campbell) takes steps to learn how to control her magic. Finally, Klaus delivers some surprising news to Father Kieran.”