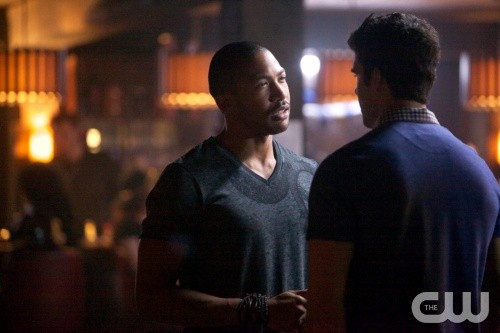 On episode 6 of THE ORIGINALS called, “Fruit of the Poisoned Tree,” Elijah and Klaus are sitting in the study reading. Klaus is reading something called a poison tree. The cut glances at each other but say nothing. Rebekah walks in and can’t believe that the first thing they decide to dogmas a family is a vampire book club. She ask about the dead girl on the table. Klaus explains he got it for Elijah because he might be a bit peckish. Elijah wants nothing to do with Klaus’s lame attempt at a peace offering and waves it off. (He is so freaking uppity.) Rebekah states that she will fetch the rubbish bin since the girls blood dripping is staining the 200 year old carpet.

Marcel walks into the palace royale. Cammie goes to leave flowers for,her brother and sees someone has spray painted murderer on his plaque. The Father is unboarding the church. Haley walks into the study and Elijah follows her with his eyes. Klaus is watching Elijah ( I think Elijah might like her a little bit more than as a friend. The look on Klaus’s face would confirm he would agree.) Elijah lays down his book and goes in the kitchen to see Haley. Elijah tells her good morning. Haley is complaining that they have no milk. Rebekah breezes by complaining that they have no bleach. Elijah ask Haley how she has been. Haley starts to tell him the tale we have watched play out over the last few episodes. She finally notices that he is making her a bowl of cereal with milk. Haley tells him his siblings are very protective. She also tells him that she does not like the fact her life is linked to Sophie. Elijah tells her its time he took,care of that. Rebekah breezes by again, this time dragging the dead girl behind her. Rebekah tells them she is all for getting rid of the link so that they can leave. Rebekah ask who they have to kill. Elijah says probably no one, reconsiders and then says potentially no one. Haley smiles and talks a bite of her cereal.

Sophie and Sabine are talking. Sophie is cooking when some people in hoodies and mask come in. They knock out Sabine and blow some powder in Sophie’s face which causes her to pass out.

Klaus is still reading. Rebekah is cleaning the carpet. Rebekah thinks klaus is worried about daddy hood. Klaus says with Elijah back every thing is good as gold. Elijah grabs some pages from the Grimoire and explains he is taking it to Davina. Rebekah realizes he is going to have her unknowingly break the link between Sophie and Haley. Elijah explains that his deal with Sophie is done since it was made under false pretenses. Elijah tells Klaus to come with him and Rebekah to watch Haley. Rebekah wants to know how she became super nanny. Klaus wants to know who put Elijah in charge.

Marcel is in a bar where vampires make out wherever they damn well please. Marcel ask Joshua about Klaus. Apparently Marcel knows Klaus lied about living at the palace royale hotel. Joshua tells him he must have a best friend he can rely on. Marcel tells him he does and takes off (my guess she is headed to unbrick Thierry.)

Davina is drawing when Elijah knocks on the wall. She looks up and smiles at him. Elijah shows her the book and tells her he made her a promise. Davina tells him to come in.

Cammie is in the confession. Her uncle the Father sits down to listen. They chit chat back and forth. Cammie tells him she is there about Sean.

Elijah is explaining to Davina she has to unknot the rope. If she succeeds she will get another spell one of her choosing.

Cammi can’t understand why she is more upset about Marcel blowing her off than her twin brothers death. She feels by not being upset she is letting someone get away with something. Klaus watches her leave from the rafters.

The hooded guys bring Sophie to Agnes. Agnes sticks a needle in Sophie’s neck filled with some kind of a potion that will kill Haley’s baby.

Haley feels the prick in her neck.

Sabine tells Elijah that Agnes had her men take Sophie. Klaus is not pleased. Elijah explains him nor Klaus give a damn about the witches. He tells her to talk.

Marcel is with Thierry (told you) he tells him they are going to have a talk about Klaus. He starts breaking him out of the brick.

Haley and Rebekah are talking about Rebekah being a bitch and how Haley likes that about her. Rebekah tells Haley she will be leaving soon. Haley gets light headed and assumes its morning sickness. Rebekah looks on worried.

Elijah finds Sophie and frees her from the wall shackle. Sophie explains exactly what Agnes did when she she shot her up earlier. It will cause Haley to loose the baby. Elijah tells her their deal no longer stands.

Marcel and Thierry are talking about Klaus. Thierry tells Marcel exactly what happened with Klaus and Max. Thierry thinks Klaus compelled him.

Davina is trying to undo the knot without much success.
Rebekah is trying to make Haley feel better. Sophie walks in with Elijah. Rebekah is not pleased. Elijah tells her she can help Haley. Rebekah becomes the errand girl and has to get some herbs.

Marcel comes across Rebekah and starts harassing her. Rebekah grabs what she needs and pushes past him to leave. Marcel looks upset.

Klaus and the Father make a deal. The Father brings Agnes to Klaus and he will keep Cammie safe.

The Father has Agnes brought in and shows her the syringe she used earlier. Klaus appears in the blink of a eye. Klaus tells her to undo what she did or he will show her things worse than death. Agnes tells him that what’s done is done and that his child is going to die.

Back at the house Haley is burning up. Sophie is trying to make something to help cool her down. Elijah jumps in the pool with her. Elijah is holding her to help slow her heart rate.

Davina concentrates. Elijah holds Haley. Davina gets the knot undone. Haley and the baby are fine. Haley and Sophie are no longer linked. Haley and Elijah share a moment that doesn’t go unnoticed by Rebekah. Elijah gets out of the pool. Sophie begs him to not let Klaus kill Agnes. Elijah tells Sophie that klaus won’t kill her. (But he never said he wouldn’t.) Haley threatens to kill Sophie if she ever tries to use her again.

Marcel is drinking when Rebekah comes by to say good bye. Marcel offers her a drink. Marcel tells Rebekah to say good bye. She turns to leave and he grabs her and kisses her. She pushes him away but then grabs him. Pretty soon clothes are coming off.

Klaus is in the church talking to Agnes. Klaus begins choking her. Elijah tells him not to hurt her that he gave his word. Klaus tells him he seems to do that at the least opportune times. Elijah tells Klaus he will forgive him as long as he doesn’t make him break his word. Klaus lets her go. Klaus tells Elijah he always spoils his fun. Elijah disagrees and proves it by tearing the hearts out of Agnes’s men and then snapping her neck. (In the church mind you.) Klaus smiles wickedly.

Rebekah and Marcel are talking after their hanky Pankhurst. Rebekah wants Marcel wants her to leave New Orleans with her. Marcel isn’t having it. They start fighting. Rebekah gets upset and leaves. Marcel watches her go.

Josh goes looking for Klaus. Marcel sees him and knows he is the other one that Klaus compelled. Marcel knocks on the house door and Haley opens it. Marcel introduces himself, Haley looks scared.

Klaus goes to see Cammie and tells her he avenged her brother for her. Cammie gets upset and tells her she will have no part in murder. She is upset he made her forget her memories. She threatens him. Klaus leaves.

Marcel catches him outside. Marcel tells him he can have Cammie if he wants her. Marcel also tells him that he went to his old plantation. Marcel leaves Klaus looks worried.

If you want a sneak peek video & synopsis of next week’s episode 7, “Bloodletting” check out the preview of episode 6 below!

A BLAST FROM THE PAST — When someone from Hayley’s past makes a startling revelation, she grows concerned for herself and the baby. Amidst growing tensions between them, Klaus and Elijah turn to Sabine for help in locating Hayley, who has gone missing. After making a trip down to the bayou, Klaus has a surprising and dangerous encounter with an unexpected visitor. Meanwhile, Davina makes a surprising connection, and Marcel makes Rebekah an enticing offer that leaves her torn.