The Real Housewives of Atlanta RECAP 12/29/13: Season 6 Episode 9 “Midnight in the Garden of Tea and Shade” 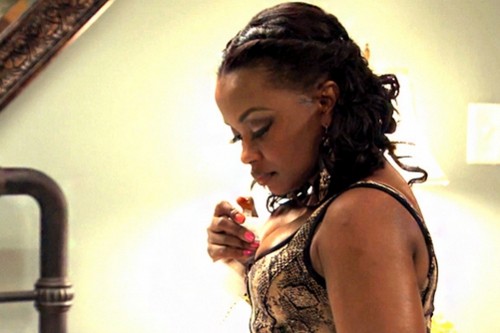 Tonight on Bravo THE REAL HOUSEWIVES OF ATLANTA continues and tonight’s episode is called, “Midnight in the Garden of Tea and Shade.” On tonight’s episode After attending an outrageous drag show, the ladies enjoy one last home-cooked Savannah dinner together — but an unwelcomed guest creates a huge commotion.  Did you watch last week’s season 6 episode 7? We did and if you want to get caught up before tonight’s episode, you can read our full and detailed recap, right here.

On last week’s episode after a rocky start, the ladies finally got on the road to their rumored haunted mansion in Savannah. Early tensions sparked between NeNe’s friend, Mynique, and Phaedra. After a day of sightseeing in historical Savannah, the ladies gathered for cocktails only to learn the truly juicy history actually lied between Mynique’s husband Chuck and a couple of the ladies.

On tonight’s show with the ladies still enjoying their time in Savannah, things quickly take a left turn when NeNe and Cynthia come to a heated disagreement about parenting, causing Cynthia to have a major breakdown. After attending an outrageous drag show, the ladies enjoy one last home-cooked Savannah dinner together — but an unwelcomed guest creates a huge commotion, causing the meal to end on an unexpected note.

Tonight’s episode is going to be another drama packed one, which you won’t want to miss. So be sure to tune in for our live coverage of Bravos’ The Real Housewives of Atlanta Season 6 episode 9 – tonight at 8PM EST! While you wait for our recap, hit the comments and let us know how excited you are about the new episode of RHOA tonight.

Nene’s plan for the trip didn’t work as well as she originally planned it. Rather than bond, which she knew would be nearly impossible; the women have all fought with each other at one point in time. So she decided on a dinner. Everyone stays in and will cook a meal for each other. Cynthia thinks Nene went with that idea after a few too many drinks the night before. Nene might very well be hung over.

Yet the women might need a break from each other. They were having breakfast when Cynthia mentioned how she and her family have been handling Noelle’s dating. She brought up so Porsha wouldn’t be in the uncomfortable position of explain her miscarriage and in all honestly probably thought the women would have a good laugh. But she forgot how much she and Nene had disagreed on how to deal with the situation. Nene tells the girls she could never condone her own son, who happens to be the same age as Noelle, having a dating life. Then also for Cynthia to help her daughter go on dates is just what she’s used to.

Nene is a stricter parent because that’s how she was raised and the girls today are a bit too grown for her. She starts laughing how you’ll see these young girls twerking and doing all sorts of things when Cynthia bursts in tears. She felt like Nene judged her parenting and found her wanting. She leaves the table and Kenya and Porsha follow right behind her. They reassure her that she’s doing a good job. Noelle speaks and confides in her mother which is a rare thing. She shouldn’t let anyone take that from her.

Later talking about it; Kenya breaks down. She and her own mother don’t even have a relationship. They’ve never spoken. When her mother spots at family events, the other woman pretends like she never saw Kenya. That relationship has always bothered Kenya and put her on edge with her relationships, but she knows she should open herself up more. She told all these things to Porsha seeing as they’re both women who dream of becoming mothers.

Nene spoke to Cynthia by which she actually downplayed everything that happened earlier. She knew the best way to cut the tension would be to laugh about it. After setting things to right with Cynthia, she was going to get Porsha for dinner when she heard Porsha crying her room. Cynthia she can take but anymore women crying is just too much. They’re ruining the vacation atmosphere.

Porsha had went on Kordell’s instagram and had saw a picture with him and his son. She missed the family she had and every now and then she breaks down. Nene tells her to reach out. A divorce doesn’t have to completely end things. Porsha is nervous although she knows she should follow Nene’s advice. It’s the only way to move on.

The ladies are preparing for a night out on the night. And Nene claims to be helping by telling Kenya she should talk to Phaedra. Throughout the trip the two women have been nothing but cordial and maybe they should fully clear the air. Kenya was going to ignore her when she chose (unwisely) to speak to Phaedra. She tried to talk about what really happened when Phaedra refused to listen. She’s made peace with her side of the story and she doesn’t have time to hear anyone else’s. Guess they weren’t that cordial for an open dialogue. Maybe next time when Phaedra can’t hide behind a breast pump to escape the awkwardness.

The women have fun at the drag club and everyone is laughing and drinking. Finally there is peace though how long it will last is a mystery. They still have to have the dinner back at their hotel.

Porsha took Nene’s advice and texted Kordell asking him to talk. He wanted to know what they had to talk about and Porsha didn’t know how to answer. She asked the ladies what she should say when Kandi replied to the text for her. She wrote “Us” and sent it. Porsha is nervous but Nene says this is how you fight for your family while Kenya tells Porsha to speak from her heart.

Kandi moves the conversation along. She’s telling everyone about her new musical. Just something she recently thought of when a bug interrupts the conversation. It was a huge roach and it could fly which some of the ladies didn’t know was possible. Kenya and Porsha shared a couple of laughs killing it.  Nene is grateful they’re on a better note but she wants to bring up something with Porsha. She ruins the happy mood by accusing Porsha of taking and never giving. She feels like Porsha has never been there for any of them.

Porsha acknowledges that she gotten caught up with her divorce and apologizes to Nene. She promises to be a better friend in the future and the women hug it out. For now this is a happy ending though you never know next week will bring?