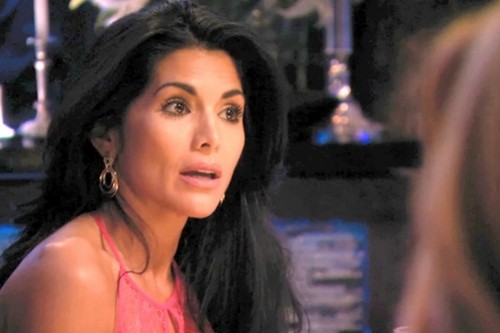 THE REAL HOUSEWIVES OF BEVERLY HILLS returns to Bravo tonight for a whole new episode called, “Guess Who’s Coming To Dinner?” On tonight’s show when Lisa hosts a dinner at SUR to mend things with Joyce, things go worse than her last meal with “The Dream Team.”  Did you watch last week’s episode?  We did and we recapped it right here for you.

On last week’s show Kim sent problem dog Kingsley off to doggy boarding school. Yolanda hosted a night of fine dining and music — provided by the Canadian Tenors — at her gorgeous Malibu home. However, she inadvertently divides the group in two by dubbing herself, Brandi and Lisa “The Dream Team.” Tipsy Brandi continued to insult Joyce, and once in the privacy of their limo ride home, Joyce and husband Michael voice their anger and contempted for Brandi.

On tonight’s show it’s a happy time for some of the housewives, as Yolanda celebrates her anniversary with David, Kim takes an exuberant ride in a racecar, and Carlton shops for racy lingerie with. . .her mother-in-law?! Brandi and Joyce avoid each other at a fitting for Kyle’s upcoming fashion show, but they come face to face when Lisa invites them to a group dinner at SUR. Neither Brandi nor Joyce hold their feelings back and the night devolves into name-calling and the lobbing of “f— bombs.”

Yolanda and her husband are coming on their 7th year anniversary. When they meet she was a single mother who wasn’t even thinking about dating and now they’re their celebrating another anniversary. To make the night special she created a little book for him. It’s fulled with pictures of a naked Yolanda. As she says you have to keep the passion burning because was its gone then it’s never coming back. Before the date she was actualy getting pretty worried. She woke up to a massive breakout along her chin. Luckily, Brandi helped her by advising her to use visine and ice.

Poor Brandi. If only her friends could be there for her as much as she tries to be there for them. Lisa is trying though. She realized that she’s been getting naggy lately and she saw how much Brandi how grown to resent her “concern”. So she’s going to try and drop that at the same time she wants to help mend fences between Brandi and Joyce. Those two women need help and she’s going to invite them to a dinner.

Kyle was saved from having to deal with them fighting though. She asked both women to do the catwalk for her charity fashion show and they agreed. While they don’t like each other; they’ve benevolently stayed in their corners. It doesn’t mean Brandi wasn’t annoyed. It just means she chose not to voice it this time. However a problem did crop up. Both women are too skinny for half the clothes Kyle chose for them to model. What’s next after negative Zero?

Carlton has an open relationship with her mother-in-law. As she takes the woman with her and her husband to go shopping for new toys and bathing suits. In the beginning the other woman wasn’t quite ready for her personality but she’s becoming more accommodating. She let Carlton give her lap dance right there in the store.

Lisa’s dinner involves Yolanda, Joyce and Brandi. All husbands are included but Lisa invited an extra guest to keep Brandi happy for the interim. She invited Mohammad as in Yolanda’s ex-husband. The whole night is supposed to be a way to start fresh. Lisa warned Brandi and Joyce prior to the party. Yet that didn’t stop Joyce from not hugging Brandi after she hugged everyone else. Brandi considers that a snub and so the night begins.

Joyce doesn’t know Lisa’s number one rule. A fresh start means forget everything that occurred before. Joyce and Brandi haven’t done that. They soon get into a fight about what they’ve said to each other so far. The Lisa comment came up along with the Black comment. And to make it worse, Lisa had laid off of giving Brandi advice so it seems like she’s only telling Joyce to stop because she’s in the wrong. Joyce, Brandi, and Joyce’s husband are all in an argument. Yolanda tells the husband to leave it between the women and he can’t.

Eventually the argument dwindles down and Yolanda says they should drop it. It all sounds petty and Joyce’s husband tells her that she’s an instigator. He brings up her dinner back when she called her friends the dream team. It’s re-fueling the fight.

Joyce has taken a lot from Brandi and so far the well-known drunk has given nothing but excuses for her vile actions.

The fight continues on into next week. Will someone finally put Brandi in a corner?