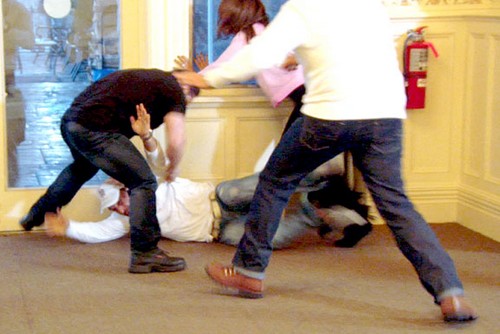 Tonight on BRAVO our favorite Housewife show THE REAL HOUSEWIVES OF NEW JERSEY returns with and all new episode called, “Scum One, Scum All.” On tonight’s show All bets are off when a brawl erupts between Teresa’s husband, Joe, and brother, Joe. To get caught up for tonight’s crazy episode if you missed last’s week, you can read our full and detailed recap, right here.

On last week’s show The Housewives packed their bags and headed up to a frozen Lake George to thaw out their issues. Teresa prepared to confront Jacqueline, Melissa chipped away at Teresa’s lies, while Kathy played referee on the sidelines. Years of hostility fractured the group when relationship building exercises turned in to a throwdown between the Joes — threatened to crumble this fragile group forever.

On tonight’s show All bets are off when a brawl erupts between Teresa’s husband, Joe, and brother, Joe. Melissa, Kathy and Teresa seethe with anger as the fate of this family hangs in the balance. Caroline attempts to help pull this family back from the brink of destruction with the help of a much-needed professional.

Tonight’s episode is going to be filled with more crazy Housewife drama that you won’t want to miss, so be sure to tune in for our live coverage of the show tonight at 8 PM EST! While you wait for our recap hit the comments and let us know how excited you are about the new season of The Real Housewives of New Jersey! Also we have a sneak peek video of tonight’s season 5 episode 8 below!

If you’ve been watching The Real Housewives of New Jersey then you no doubt saw shit get real last week. The Giudices, Gorgas and Wakiles all went to a healing retreat up In Lake George and of course things went badly. Joe Gorga was upset and called Teresa “Scum”. Such a simple little word and it was the catalyst for all hell to break lose. Of course Tre told her husband and he was storming after Joe Gorga. The two ended up down and rolling beating the crap out of each other. Security and Melissa Gorga busted up the fight while Joe Giudice screamed that Gorga was biting his nuts. Teresa left rather than helping to bust up the fight, a move that was ripped apart by Melissa.

Richie talks Teresa into going to talk to her brother but once she gets to his room he refuses to talk to her. Joe Gorga is crying his eyes out while Melissa is being strong for both of them. In the end Teresa and Joe Giudice spend the night holed up in their room while everyone else goes to dinner together. Amazingly they are all under one roof still which means that there could be hope.

Teresa is so desperate she actually calls Caroline and asks her to come up to Lake George to help her. Caroline doesn’t want to be involved but she knows how hard it is for Tre to ask for help. That prompts her to pack a bag and make the snowy trip.

Dr. V is the relationship counselor that is in charge of this train wreck of a retreat and she decides to sit with Teresa first. I’m impressed because this chick isn’t letting Teresa get away with anything. She circles back to strippergate and blames it at least in part on Teresa.

Dr. V pulls Joe Gorga aside next and he explains all of the hurt that his sister has caused. He wants to walk away from Teresa  and doesn’t trust her to fix anything. Dr. V pulls Teresa in to that session and he tells her that he has no interest in fixing things. Ironically once they begin to talk Dr. V gets them to connect and the tears start rolling. Tune in next week for more RHONJ!