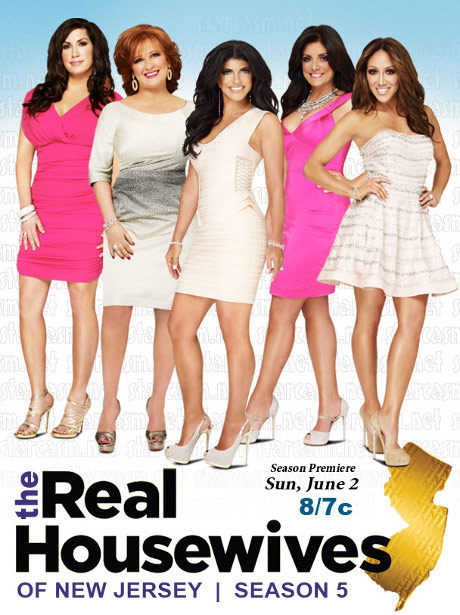 The last couple of weeks Bravo has been teasing season five of The Real Housewives of New Jersey. The promos for the show, which begins again June 2, paint a picture of a dark and morose season ahead. It’s as if Teresa Giudice, Melissa Gorga, Caroline Manzo, Jacqueline Laurita, and Kathy Wakile are in a Tim Burton movie. The promo tag line is “Family is a Force of Nature”.

For the third season in a row the show will focus on familial relationships. Kathy talked to Enstarz about nature being a metaphor for the new season. She said “You know, the weathers unpredictable sometimes and you know you got your clouds and you got your sunshine, and you got your rain and you got your storm so there you go and its like, you know when your out there on the water, say your in a boat on the water, you don’t know where the tides going. Yeah, it’s a tidal wave.” Melissa also talked to Enstarz saying we can expect “A lot of love, a lot of tears. There’s a lot of hate, unfortunately. I think you should expect the unexpected because it really is a crazy season.”

Teresa and Melissa are not the only ones facing familial crisis. There have been multiple reports that Caroline’s husband Al Manzo is cheating on her. An insider told All Things Real Housewives “Women are coming forward revealing Albert cheats on Caroline. Caroline knows of Albert’s infidelities, but she turns the other cheek and ignores what’s really going on.” Caroline has already publicly address the rumors. She told The New York Daily News, “I know the man I married. He’s a good man. But he’s a man. I don’t believe there were any long-term affairs. If that were the case, this story would end differently.”

This is coming from a woman who just wrote an advice book called Let Me Tell You Something and had a short lived radio show and newspaper column full of advice on life lessons. For someone so smart she really is dumb. On a lighter note we will see Caroline’s sons Albie and Christopher open up their own restaurant. This is the brother’s latest venture. Last season we saw them working with their uncle to promote a product called Black Water. Albie and Chris struggled to market the gross looking drink. It makes sense they would go into the restaurant business. Both worked at their dad’s banquet hall The Brownstone and have a lot of knowledge of what it takes to run this kind of business.

Jacqueline’s storyline will revolve around her youngest son, Nicholas. We will see her and husband Chris Laurita learning to deal with their youngest son Nicholas’s autism diagnosis. Jacqueline has become a vocal advocate for autism diagnosis and treatment. People magazine has a great article talking about Nicholas’ diagnosis and how the family is helping him progress.
Per The Examiner season five will be different than past seasons because the ladies start to mend fences. Melissa talked to Enstarz about her relationship with Teresa saying “We’re in a good spot. Thank G-d we’re family and we’re always gonna try to work it out at the end of the day. I always have her back, no matter what anybody thinks.” Melissa also says Hurricane Sandy helped bring the family closer together.

It’s been reported that Teresa’s friendship with Caroline is also on the mend. After hearing the disgusting things these women said to one another the past two seasons I really wasn’t expecting them to ever be friends again. Radar Online is reporting Caroline accompanied Teresa and Melissa to therapy because all three women have had enough of the constant fighting. The Examiner reports Caroline even speaks to Teresa’s brother, Joe Gorga, about patching things up with his only sister. But then again Caroline is always in everyone’s business so that part is not shocking. Caroline loves Joe so she butts in to help him. What she should have done is first speak with her friend Teresa. Caroline would deny that allegation but I’m sure it’s true.

This season Teresa will have someone on her team. All Things Real Housewives says Teresa’s good friend Jennifer Dalton has been filming with her, Kim DiPaolo and Elvira Gau. I was very glad to hear this news. Teresa was beaten to a pulp the last two seasons so it’s good to see her getting some support when the gang of bullies strike.

We will see another bloody brawl but this time it’s not a fight between cast members. A man that was spreading false rumors about Melissa was beaten by several cast members. It’s nice to see these people working together instead of against each other.

Recently it was reported there was trouble in paradise for Kathy and her husband Rich Wakile. There are rumors of infidelity on the part of Rich. They seem like the perfect couple so it can’t true, right? Rich has always shown he adores Kathy, buying her gifts such as a Mercedes and never being able to keep his hands to himself. Either he is the perfect husband or really good at covering up his dirty laundry.