The Real Housewives of New Jersey Tell All Part 1: The Ladies of Jersey Find themselves in the Center of a Hot Mess! 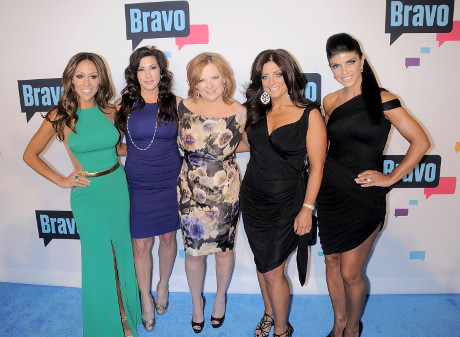 Viewers must have decided that this show has become boring. Ratings for season 5 did OK but the reunion shows were the lowest rated in the franchise’s history. Teresa Giudice is one of the most popular housewives in all of the franchises, but the family drama that played out for three seasons has worn thin. Bravo is trying to lure back the show’s viewers with this special program.

There were a few unremarkable clips. The Manzos did a family portrait that turned out hideous. Unprofessional Melissa Gorga showed up late for dance rehearsal in Orlando. She was enjoying the pool at her manager’s compound. Mel then punished viewers with her off key singing and uncoordinated dance moves. Luckily for us the entire show was not boring.

I love the cute clips with the Giudice children. Kim DePaola was at Teresa Giudice’s house and mentions she hasn’t seen Milania in a while. When Teresa’s mini me and her side pony come home Teresa and Kim ask her about her day. Miliania mentions she is afraid to give her mom her report card. She feels something bad might be written because she is being bullied at school. Miliania is no wimp! She fought back! Later we see Juicy Joe and Cousin Rosie Pierri help Joe’s daughter Gia with her social studies homework. The questions are on a 6th grade level. Gia quizzes the adults and they fail miserably! Juicy and Rosie fall out laughing when they realize they don’t know where the Grand Canyon is located and that Pluto is no longer a planet.

Jacqueline Laurita and Teresa were shown working for their causes. Jacqueline and her family traveled to Amish country. She read camel’s milk would be a good treatment for her son’s autism so they went to check it out. Teresa gave her first speech when accepting the Real Hero Award from the Nephcure Foundation.

Several clips surrounded the subject of sex. Joe Gorga gets dirty in the kitchen with his wife Melissa. Rich Wakile gave his son Joseph the birds and the bees talk while playing pool. In Arizona, everyone turned relaxing couple’s yoga into heart pounding foreplay. At least they weren’t fighting!

Part one ended with a bang! Teresa’s friend Jennifer Dalton is throwing a party and having a fashion show to raise awareness for diabetes. The event took place at Sear House. Prior to the party Jen told Teresa to watch her back with Kim DePaola. As a result Kim thinks very little of Jen. She complains to Teresa all night about the chaotic party. When the ladies end up sitting on the same couch Kim decides to stir the pot. She asks Jen if she has a handle on her party. Jen shoots back her party is better than anything Kim ever did. The two women get into a shouting match. Jen then kicks Kim out of her party. For once our favorite ladies from Jersey were just spectators to a hot mess situation.