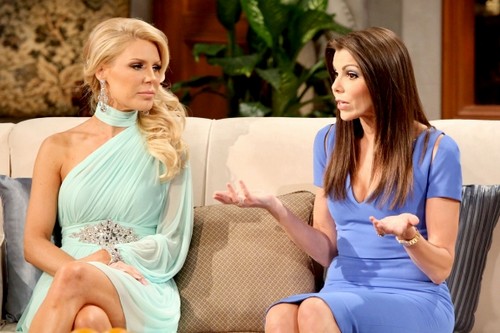 THE REAL HOUSEWIVES OF ORANGE COUNTY continues on Bravo tonight with a whole new episode called, “Reunion Part 2.” On tonight’s episode Gretchen comes under fire as accusations about ‘Malibu Country’ and her engagement to Slade fly. Did you watch last week’s episode? We did and we recapped it here for you HERE!

On last week’s show Andy Cohen sat down with Vicki Gunvalson, Tamra Barney, Gretchen Rossi, Alexis Bellino, Heather Dubrow and Lydia McLaughlin to revisit the drama from season eight. The epic three-part reunion began as Vicki and Gretchen went head to head digging up the past and slinging mud as they vied for Tamra’s friendship. The drama then turned to new housewife Lydia who is called to task about her outspokenness and forced to defend herself against accusations of stirring the pot. And then the tension hit a boiling point when original housewife Lauri Petersen returns to defend her claims of Vicki’s infidelities instigating an explosive fight that changes the nature of their friendship forever.

On tonight’s show the drama-packed reunion continues as Gretchen faces off against the other ladies about Tamra’s wedding dress shopping and the accusation that Gretchen tried to force Alexis out of the festivities. Heather confronts Gretchen about what really happened behind-the-scenes with the ‘Malibu Country’ auditions, and Gretchen is left in tears when the other ladies make shocking accusations about her engagement to Slade.

I finally understand why Andy Cohen does shots during his Watch What Happens Live show each night. It makes the housewives screeching slightly easier to handle. I’ve decided that Vodka will make it a whole lot easier to get through the second part of The Real Housewives of Orange County right now. In the first segment it’s like kumbaya between Tamra and everyone else. She rehashes her painful past and how no one really knew about it until she spoke publicly.

The second segment turns into a Gretchen shit show. Tamra admits that she lied to her about dress shopping. If you tuned in earlier in the season you saw Gretchen confused as to why Alexis was invited dress shopping and Tamra had told her she didn’t really want her there. Now Tamra confesses that she basically tells Gretchen what she wants to hear in any given moment because Gretchen does like her to have any other fans. This is when all of the screeching starts with pretty much everyone ganging up on Gretchen claiming she’s a liar. She had claimed she was offered a art on the now defunct Malibu Country and plays voice mail messages and presents emails to prove she told the truth. But guess what, no one cares and they all still are calling Gretchen a liar!

When we come back from a break it’s two more segments of everyone ganging up on Gretchen. Her over the top proposal is called into question and the ladies seem to believe that if they weren’t filming that whole evening would never have happened. By now Gretchen feels like her only friend in the room is Lydia because she;’s the only one who hasn’t taken a shot at her- yet. As they play back Gretchen proposing to Slade she bursts into a trillion tears. She can’t believe everyone is ganging up on her when she thought they would all be happy for her.