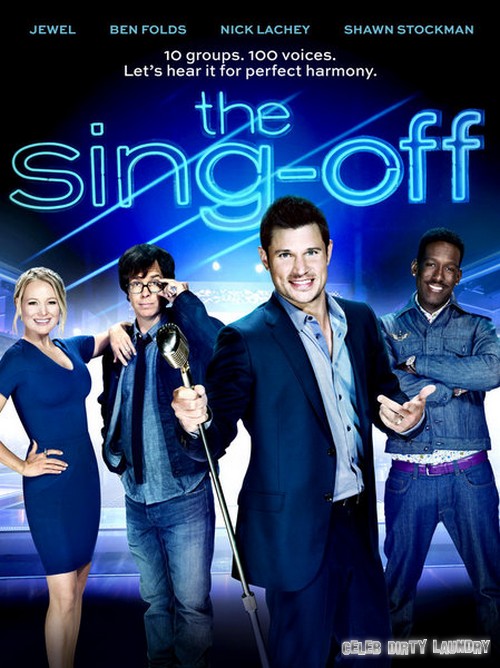 Tonight on NBC their unique competition series, THE SING-OFF that sings a different tune and is hosted by multi-platinum recording artist Nick Lachey, returns.  Jewel will join the judges table this season alongside Ben Folds (Ben Folds Five) and Shawn Stockman (Boyz II Men), who are both returning.  This year’s season will run for seven episodes, with the finale set for telecast on Monday, Dec. 23 with a two-hour episode (9-11 p.m.)

The program showcases the country’s top a cappella groups performing popular songs in ways that viewers have never heard them before. “The Sing-Off” has no lip-synching, back-up bands or safety net. They are singing with dreams of walking away with the ultimate prize — a recording contract and $100,000.

On tonight’s show the groups strive to make a killer first impression on the judges. The groups pull out the best songs from their music libraries to win over the crowd and stay in the competition.Starring: Nick Lachey, Jewel, Shawn Stockman and Ben Folds.

Tonight’s  “The Sing-Off” is back and it is going to be an exciting one, which you won’t want to miss. So be sure to tune in for our live coverage of NBC’s The Sing-Off – tonight at 9 PM EST!   While you wait for our recap, hit the comments and let us know how excited you are about the new season of The Sing-Off.

The season premiere of The Sing-Off opens with all ten competing a cappella groups performing a rendition of “Carry On.” The Sing-Off host Nick Lachey takes the stage, and announces that the winning group will receive a SONY recording contract and $100,000.00. He introduces the judges: Ben Folds, Shawn Stockman of Boyz II Men, and singer Jewel.

The first singing group to perform will be the youngest in the competition, Vocal Rush is from Oakland California. Oakland has a reputation for being a scary and violent city, and they want to represent their city in a positive light. Tonight Vocal Rush will be performing “Bottom Of The River” by Delta Rae.

Ben thinks Vocal Rush was “super” and a “great way” to start the night. He thinks the lead singer, Jordan’s voice, was beautiful. He thinks their performance was “really good.” Shawn loved that Vocal Rush incorporated a step-dance routine in their performance, and he thinks that Jordan “sold that song.” Jewel loved that they brought the swell up and down, and she likes that they embodied some “righteous anger” into the song.

The next group to perform is a touring country band, and all male singing group from Minnesota called Home Free. They will be the only group performing on this season of The Sing-Off that sings country music. Tonight they be singing the country song “Cruise” by Florida Georgia Line.

Ben thinks their “bass was amazing.” Jewel is glad to see a country band on The Sing-Off, and she thinks they have some “crazy range.” Shawn thinks that “country music is just a white man’s R&B” and he “would love to hear more them,” he thinks they have what it takes to go all the way.

The next group to sing is the Princeton Footnotes, from Princeton, New Jersey. Although they are an ivy-league group, they want viewers to know that they are not “stuffy” or “stereotypical ivy-league guys.” Tonight they will be performing Taylor Swift’s popular song, “I Knew you Were Trouble”

Shawn thinks Taylor Swift never would have imagined her song sounding like that. He wishes the leads were a little looser though. Ben likes the Footnotes’ lyrical changes. Jewel thinks that their basses needs to work on hitting their notes better.

The next group, Calle Sol, is from Puerto Rico. They are excited to share their “Latin Flavor” with America, and their hot dance moves (the four girls in the group are not just singer, but also dancers).

Calle Sol will be singing Rihanna’s “Pon De Replay.” Ben thinks Calle Sol’s performance was “really fun” and “really unique.” Jewel thinks that their dance moves were great, and their vocals are really strong as well. She thinks that the rhythm an bass really held the performance together. Shawn thinks that they need to work on their mid-range, they had some highs and some lows, but not much in between.

The next a cappella group to perform on the season premiere of The Sing-Off is Street Corner Renaissance, from Los Angeles, California. The old-school group of five is made up of retired men that sing a cappella on the street corners of LA.

Tonight Street Corner Renaissance “What Makes You Beautiful.” Shawn loves their performance, and rushes onto the stage to hug them all individually. He thinks “children should take notes,” he enjoyed their performance immensely. Jewel thinks that their performance was “awesome.” Ben liked them and he thought that they were “real honest.”

It is time for the judges to choose one of the first five groups to go to the elimination sing-off at the end of the show. Street Corner Renaissance, Vocal Rush, Home Free, and Calle Sol are safe. The Princeton Footnotes will have to compete in the sing-off at the end of the show and battle with another group to see who will be eliminated tonight.

The next group to perform is Ten, from Dallas, Texas. They have never sang together in front of an audience before, they got together just to compete in The Sing-Off.

Up next is Element, the only all-female group to perform on The Sing Off. Element hails from New York City.

Tonight Element will be performing the song “Burn” by Ellie Goulding. Jewel really loved the opening arrangement, but she thought they rushed their build-up. Over all she thinks they did a good job. Shawn thinks that the arrangement was great, and the harmonies were really good.

The next group to perform is Voiceplay, from Orlando, Florida, a group that performs together at Universal Theme Park.

The next group to perform is all male group from the Philippines, called the Filharmonic. They will be singing “Treasure” by Bruno Mars. Jewel loved their performance, and she thinks they have a lot of personality. Ben thinks that they are fun and entertaining, but at one time during the song they did jump the beat. Shawn thinks that Filharmonic has the same style as Boyz II Men, and the same singing style.

The final group to be performing tonight is the Acoustikats, from the University of Kentucky. The Acoustikats will be performing the song “Blurred Lines” by Robin Thicke. Shawn loved their performance, he gave them a standing ovation. Ben thinks that they were “fun,” he does think that they rushed a little. Shawn was a little nervous because he loves Robin Thicke’s record, but they did “Blurred Lines” justice. Jewel loved it, she hasn’t giggled like that in years. She has never seen men work their hips that much, she thinks they must have taken a stripper class.

It is time to send another group to the elimination round. Filharmonic, Ten, Acoustikats, and Elements are safe. Voiceplay will be competing against the Princeton Footnotes in a Sing-Off, to see which group will be going home. The groups will be performing N’Sync’s “Bye, Bye, Bye.”

The judges, Ben, Shawn, and Jewel must decide which group to send home. They think that Voiceplay will “show more evolution” so they decide to keep them. The Princeton Footnotes are going home tonight.