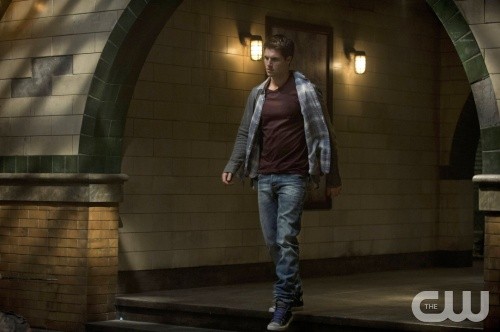 Tonight on the CW The Tomorrow People returns with a new episode called, “Girl, Interrupted.”  On tonight’s show John gives Stephen a mission to infiltrate Ultra’s main computer to help give them an advantage in finding new break-outs.

If you have never see the show they are the next evolutionary leap of mankind, a generation of humans born with paranormal abilities — the Tomorrow People.  Stephen Jameson stands at the crossroads between the world we know and the shifting world of the future. Up until a year ago, Stephen was a “normal” teenager — until he began hearing voices and teleporting in his sleep, never knowing where he might wake up. Now, Stephen’s issues have gone far beyond the usual teenage angst, and he is beginning to question his sanity. In desperation, Stephen decides to listen to one of the voices in his head, and it leads him to his first encounter with the Tomorrow People — John, Cara and Russell — a genetically advanced race with the abilities of telekinesis, teleportation and telepathic communication.

On tonight’s show Stephen reluctantly attends a party with Astrid, but is startled when he hears that one of his classmates is in peril. Desperate to help, Stephen turns to John and Cara, but they make it clear that they do not help humans. Stephen secretly tries to enlist Cara’s help, which brings up her own feelings about her traumatic past. Meanwhile, John gives Stephen a mission to infiltrate Ultra’s main computer to help give them an advantage in finding new break-outs.

Tonight’s episode is going to be another great one, and you won’t want to miss it. So be sure to tune in for our live coverage of CW’s The Tomorrow People – tonight at 9PM EST! While you wait for our recap, hit the comments and let us know if you are excited about the season 1 episode 3 of The Tomorrow People. While you wait for the recap, check out a sneak peek of tonight’s episode below!