The Vampire Diaries RECAP 10/3/13: Season 5 Premiere “I Know What You Did Last Summer” 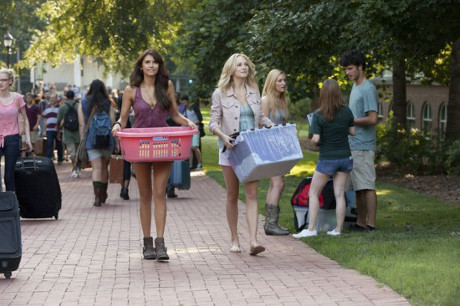 Ah, we’re so excited to announce the first recap for The Vampire Diaries season 5! Tonight, on The CW, our favorite Mystic Falls supernatural homies will be returning for the season 5 premiere, which is titled “I Know What You Did Last Summer.” Not the most original of titles, but we’re super excited nonetheless, as we’ve been super stressed out ever since the end of the season 4 finale. If you missed the season 4 finale, CLICK HERE to get caught up so you can swoop into this new episode with style (also, you dont’ want to be saying to your friends every two seconds, “Pssst, what happened to her last freaking season!?!?”).

We’re expecting lots of things to happen during this episode. Of course, if you remember, at the end of last episode we were shown Silas’s true form, which looks like Stefan. He locked Elena’s Stefan in a safe and pushed him over a cliff. Now, he’s swimming with the fishes and we have a feeling it’ll be a while until we’re reunited with the Stefan we’ve grown to know over the past seasons.

Here’s a wonderfully detailed episode synopsis for you to sink your fangs into before the premiere.

The Vampire Diaries Season 5 premiere 2013 – After spending the summer enjoying her passionate relationship with Damon (Ian Somerhalder), and making sure that Jeremy (Steven R. McQueen) is adjusting after his return from the dead, Elena (Nina Dobrev) is thrilled to move into the dorm at nearby Whitmore College with her new roommate, Caroline (Candice Accola). Still believing that Bonnie (Kat Graham) has been traveling all summer and will soon join them, Elena and Caroline are surprised when a student named Megan (guest star Hayley Kiyoko) shows up and announces that she will be sharing their dorm room. Katherine (Nina Dobrev) makes an unexpected appearance at the Salvatore house and pleads with Damon to help her now that she is human and vulnerable to her enemies.

Matt (Zach Roerig) and Rebekah (Claire Holt) return to Mystic Falls after spending a wild summer in Europe, where they met a mysterious beauty named Nadia (guest star Olga Fonda). Elena can’t shake the feeling that something is wrong with Stefan (Paul Wesley), and Silas (Paul Wesley) makes a terrifying appearance at the “End of Summer” party in the town square. Lance Anderson directed the episode written by Caroline Dries .

What are you looking most forward to during season 5? Make sure to stop by at 8 PM EST to get your LIVE recap! Also airing tonight is the series premiere of The Originals — find out why we’re super pumped for that episode HERE. We’ll also be recapping that for you, too, so be sure to check that out as well.

THE LIVE RECAP IS HERE