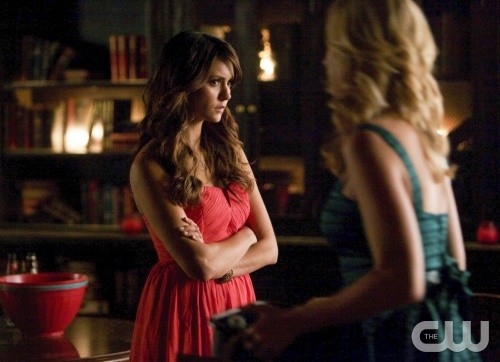 THE VAMPIRE DIARIES returns to the CW tonight with a whole new episode called, “Dead Man on Campus.”  On tonight’s episode,  Silas fails to keep a promise, causing Damon to turn to Tessa (guest star Janina Gavankar) for help with his new plan, and Stefan makes a heartbreaking confession to Damon and Elena.  Did you watch last week’s season premiere?  We did and we recapped it right here for you.

On last week’s episode while Elena and Damon tried to explain Amara’s situation to Stefan, Dr. Wes (guest star Rick Cosnett) gave Katherine some deeply disturbing news. Nadia (guest star Olga Fonda) showed up at Caroline’s dorm room, searching for Katherine. After a surprising conversation with Amara, Jeremy and Bonnie shared a glimmer of hope. Silas fails to keep a promise, causing Damon to turn to Tessa (guest star Janina Gavankar) for help with his new plan, and Stefan made a heartbreaking confession to Damon and Elena.

On tonight’s show at Whitmore College, Elena and Caroline decide it’s time to throw a big party, but their plans are interrupted when Jesse suddenly needs Caroline’s help. At Elena’s request, Damon comes up with an effective method to get Wes to answer his questions. At the party, Elena finds that she and Aaron have a lot in common, and Caroline grows more concerned about Jesse. Meanwhile, Katherine (Nina Dobrev) does a favor for Matt and manages to get through to Stefan (Paul Wesley), who is still struggling to overcome the events of the summer. Finally, Bonnie does her best to cope with her new reality, and Damon makes a terrifying discovery about a secret society. Steven R. McQueen also stars.

The Vampire Diaries Season 5 episode 8 “Death and the Maiden” airs at 8PM tonight on the CW and we will be live blogging it will all the up-to-the-minutes. So come back to this spot and spend the evening with us enjoying the show! Make sure to refresh often to get the most current update!

The gang is all back together. Bonnie is technically alive again and her friends want to celebrate. They’re throwing a party in her honor at the dorms but there is a slight hiccup in their plans. They kind of don’t know anyone and the people they have met are part of a secret anti-vampire society or Jesse. Caroline hasn’t heard from him since their kiss happened weeks ago. She does’t know their professor killed him to turn him into a full fledge vampire. Yet the professor couldn’t control a vampire as much as he thought. Jesse broke out of his cell.

Don’t ask but Jesse thought the best place to go after that was back to his dorm room. The one he shared with Aaron. He had just finished calling Caroline to come when poor Aaron returned to their room. Caroline got there in time before Jesse killed his friend. Although he did maim him.

Caroline is able to calm him down and with Elena’s help he learns how to feed without hurting anyone. Still Caroline makes sure he knows how to fix any possible damage. She teaches him hoe to heal humans from a vampire attack.

Elsewhere, Katherine was the one to help Matt with his problem. She explained him to what Traveller are. They’re a faction of witches that heavily believe in the spirit world. What they did to Matt was attach themselves onto his spirit like a parasite. Lucky for Matt, Katherine also happens to know who else can help him out. Her daughter for one.

Katherine needs Stefan’s help as part of her plan with Matt. After sweet talking and then moving onto guilt tripping, when the first didn’t work, she got him to agree. He should have waited until she told him the whole plane because he sure is shocked to be formally introduced to Nadia of all people.

Nadia, Katherine, and Stefan are waiting in one of the store rooms when Matt comes in. Nadia calls forth her boyfriend out of Matt so Katherine can demand answers. Nadia through they’re only mission was to kill Silas when that was just half of what Greggor came to Mystic Falls to do. He was sent to Kill Katherine. She has a dagger they want. It’s one of the few things that can truly kill a spirit user. To test it out in front of companions, Katherine kills him. It seems she never had a liking for Travellers. Why? Well she believes they’re all judgmental hypocrites. She should know – her father was one.

The part will go on. The girls brought Jess with them to keep an eye on him and as for their professor. Well, Elena left Damien in charge of Maxfield. Caroline doesn’t think that’s a good idea and yet she knows she can’t keep harping on Damien to Elena. Not if she wants to keep her friend.

Despite Damon’s methods he does get the truth out f Maxfield. The good doctor was experimenting on Jesse in order to work out a new feeding habit for vampires. He managed to create a way for vampires to start craving other vampires’ blood. If it works then humans won’t have to be a food source any longer. Hiss experiment does work. Merely look at Jesse. He was making out with Caroline when he lost control. He bit her.

Damon quickly fills Elena in. He wanted her to be safe around her new friend. Once that was done he about to fulfill his promise to Maxfield and heal him except Jesse arrived. Maxfield forgot one minor detail. Not only did he make Jess crave vampire blood but he also made him stronger than a typical new turn. Jesse can overpower Damon. His new food source.

Stefan’s PTSD is getting worse. He almost killed Katherine being so caught up in gruesome flashbacks. She somehow talked him out of it and then again she should still keep one eye open. Nadia is very upset her mother killed her boyfriend.

Katherine hates running. She’s done before and it’s why she left behind a letter for Nadia explaining why she wanted to kill herself. Stefan saw it and saved Katherine from plummeting to death. He told her this wasn’t the way. Not for the Katherine Pierce.

Elena saves Damon from being ripped apart. She staked Jesse much to Caroline’s dismay. Caroline feels like Elena, the one that used to be understanding, could have found another way. She doesn’t know why that girl turned into a killer. Later on Caroline apologizes but she couldn’t hold back the rest of her feelings. She tells Elena that the most dangerous thing in their life is Damon and its time she faces it.

Bonnie hates the pain she feels every time a supernatural crosses to the other side. The saving grace of the situation is that she also gets to see how the spirits are no longer in pain. She tried to keep the side effects away from her friends but Jesse passes over when she was trying to get intimate with Jeremy. He’s confused and she has to make him comprehend. It doesn’t matter the consequences. She would choose to be the anchor again when it means she could be with Jeremy.

Damon had Maxfied. He wasn’t going to kill him. He was going to compel Maxfield to forgetting everything that happened when he learned what the secret society really was. It was Augustine. A group dedicated to experimenting on Vampires. Damon used to be one of their patients and now he gets to return. Maxfield worked himself out of his restraints and got to set off his fail safe. Aerosol vervain…