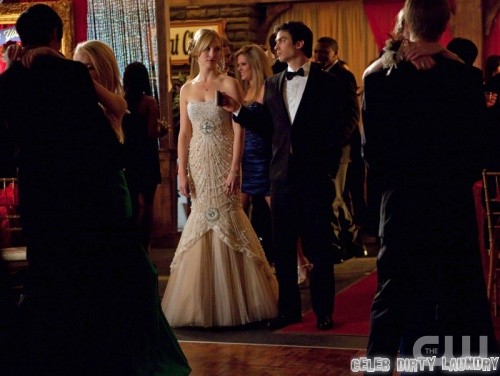 Tonight’s The Vampire Diaries returned to the CW with another exciting episode.  I cannot wait until the next episode, but bad news the show is going on hiatus for three weeks.  While you wait till The Vampire Diaries comes back we have, as usual, some juicy spoilers and a sneak peek video for your enjoyment below!

On tonight’s show Elena and Rebekah took off in search of Katherine and found themselves in a small town in Pennsylvania, where Elena had a surprising encounter with another old acquaintance — Elijah. Stefan and Damon were both concerned about Elena’s state of mind and were determined to do what was best for her, but she made it clear that helping her would be difficult. Damon was not sure how to react when Stefan revealed his unexpected plan for the future. Meanwhile, in Mystic Falls, Klaus received Caroline’s reluctant help and came to a new understanding of Silas’ powers.  Did you watch tonight’s episode?  We did and we recapped it here for you!

Spoiler alert: If you’re one of those people who doesn’t like spoilers, stop reading now! We have some juicy spoilers for you about the season 4 episode 19 of CW’s “The Vampires Diary.”

Official CW Synopsis: PROM NIGHT IN MYSTIC FALLS — After making a decision that infuriates Klaus (Joseph Morgan), Elijah (Daniel Gillies) proposes a life-changing challenge for Rebekah (Claire Holt).  Caroline (Caroline Accola) finds that her carefully laid plans for the perfect Senior Prom night are disrupted by Elena (Nina Dobrev), so she turns to an amused Klaus for a solution.  Determined to get through to Elena, Damon (Ian Somerhalder) and Stefan (Paul Wesley) both attend the prom, but the evening begins to spiral out of control despite their efforts.  When Elena suddenly lashes out in a way no one could have predicted, Matt (Zach Roerig) turns to Rebekah for help.  Finally, Bonnie (Kat Graham) makes a terrifying discovery, and Klaus receives a message that could change everything.  J. Miller Tobin directed the episode written by Neil Reynolds & Caroline Dries (#419).

After a three  week hiatus (Yep we have to wait that long) the Vampire Diaries will return with a new episode and it is Prom night.  Of course on The Vampire Diaries’ Prom won’t be a normal Prom.  But when is anything normal in Mystic Falls?  Elena is the problem with the Prom and she ruins it for everyone much to Caroline’s chagrin.  Damon and Stefan worried what she would do at the prom and Damon warns her not to, “eat the prom queen!” LOL

Damon does not think that Elena wants the cure, he thinks she just wants to kill people.  Stefan of course refuses to accept that and tells Damon they have to make Elena want the cure.  Good luck with that!

Elena is being Elena and she tells Damon, “I feel absolutely nothing for you Damon.”  She is dancing with Stefan at the Prom and he looks happy, don’t tell me she is jumping back to Stefan.  I fear it might be true, they have a smouldering moment next episode and it looks like they almost kiss.  Not happy I am team Delena all the way, but it looks like Damon and Elena are over.

The Vampire Diaries Season 4, Episode 19 “Pictures of You” airs on the CW on April 18th, 2013. Check out the preview video & some photos from episode 18 and let us know in the comments below what you think!  Which prom dress are you loving the most?