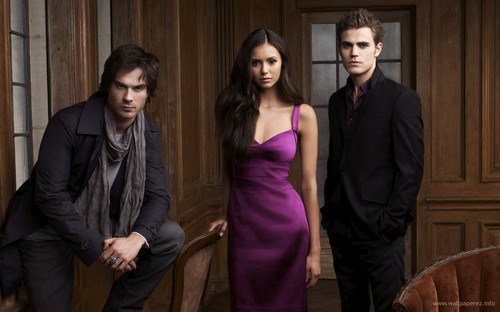 Tonight’s episode of THE VAMPIRE DIARIES was great, and we are in the countdown to the finale, only two more episodes left.  Next week’s episode is called, “The Walking Dead” and Ghosts are headed back to Mystic Falls, some good and some not so good.  While you wait for next week’s episode, as usual, we have some juicy spoilers and a sneak peek video for your enjoyment below!

On tonight’s show, another great episode – Damon and Stefan tried a brutal new approach to provoke Elena into turning her humanity back on, but the men soon realized that Elena would not buy they would hurt her.  Stefan came up with the idea of getting Katherine, because he was sure Elena would believe she wanted to hurt her.  Matt hears the plan and he is not pleased.  Although Damon and Stefan think Katherine is there to help them, she really wanted to see Elena to find out what she told Elijah that made him leave her.  Finally Matt becomes the key to Elena getting back her humanity back.  Caroline has a confusing and dangerous encounter with Klaus, but soon finds out it was not Klaus, it was Silas.  Silas stakes her and tells her to tell Bonnie to come out.  Elena regains her humanity but has now decided she has to kill Katherine. Head over to our recap to find out how that happened.  We watched tonight’s episode and we recapped it here for you!

Spoiler alert: If you’re one of those people who doesn’t like spoilers, stop reading now! We have some juicy spoilers for you about the season 4 episode 22 of CW’s “The Vampires Diary.”

Official CW Synopsis:  SOMETHING WICKED — As Graduation Day approaches, Caroline (Candice Accola) tries to distract Elena (Nina Dobrev) by focusing on simple tasks like sending out announcements, but Elena won’t be swayed from her new obsession. Sheriff Forbes (Marguerite MacIntyre) calls Damon (Ian Somerhalder) and Stefan (Paul Wesley) to the hospital, where someone has been attacking patients. Still trying to force Katherine (Nina Dobrev) to help her, Bonnie (Kat Graham) refuses to give up on her plan to defeat Silas. As a violent wind storm causes a power outage in Mystic Falls, ghosts suddenly appear – some with good intentions and some bent on revenge. Zach Roerig and Claire Holt also star. Rob Hardy directed the episode written by Brian Young & Caroline Dries

On next week’s show Ghosts are headed back to Mystic Falls.  Some are good ones and some not to good,  looking for revenge.  Will we be seeing Elena’s brother Jeremy again?  Rumor has it that one of the ghosts that comes back stays, again hoping it is Jeremy.

Considering that ghosts are walking it looks like Silas’ plan succeeded.  Silas wanted to remove the veil between the dead and living to reunite with his wife.  Problem is everyone could come back, the good and the very bad once the veil is lifted.

Someone is draining people of blood in town and Sheriff Forbes tells Damon and Stefan.  They suspect that Silas is fueling up for something big.  Bonnie is still trying to enlist Katherine’s help in defeating Silas.  Meanwhile, Damon realizes that Silas has to be stopped and wants to stop Bonnie from doing the spell.

Looks like Katherine is not upset about the veil dropping since she says gleefully, “It’s time to drop the veil and let all Hell unleash on Earth.”

The Vampire Diaries Season 4, Episode 22“The Walking Dead” airs on the CW on May 9th, 2013. Check out the preview video & some photos from episode 22 and let us know in the comments below what you think!