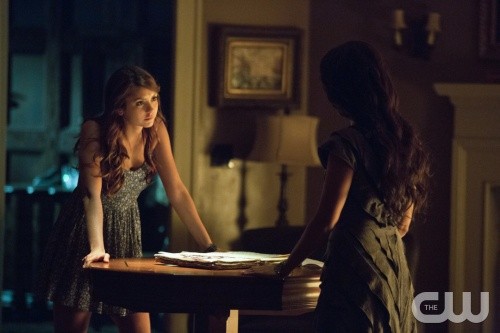 Tonight’s The Vampire Diaries returned to the CW and the show is getting more twisted and more mysterious.  I just cannot wait until the next episode, while you wait for next week’s episode, as usual, we have some juicy spoilers and a sneak peek video of “Death and the Maiden” for your enjoyment below!

On tonight’s show  Silas happily announced his new goal to Damon and Elena, but they are skeptical when he promised to accomplish one important task in return for their help.  Tessa confidently told Stefan about her next move, then realized that Silas had managed to outsmart her. A desperate Katherine discovered a new and unexpected consequences of becoming human again, and realized she needed a new place to stay.  In exchange for a spot in the dorm room, she offered to show Caroline how to get answers from Dr. Maxfield. Bonnie was touched by Jeremy’s strength and determination to stand by her. Finally, Damon was stunned when he figured out the secret to Tessa’s plan.  Did you watch tonight’s episode?  We did and we recapped it for you.

Spoiler alert: If you’re one of those people who doesn’t like spoilers, stop reading now! We have some juicy spoilers for you about the season 5 episode 7 of CW’s “The Vampires Diary.”

On next week’s show it is possible that Amara will help Bonnie come back from the other side.  At least she gives Jeremy and Bonnie hope that is might be possible.  Jeremy is convinced that Silas has to die.  Damon says he has Doppelgangers coming out of his ears.  There are at least 3 of Elena’s walking around.  That is Elena, Katherine and Amara.

The Vampire Diaries Season 5, Episode 7 “Death and the Maiden” airs on the CW on November 14th, 2013. Check out the preview video & some photos from episode 6 and let us know in the comments below what you think!