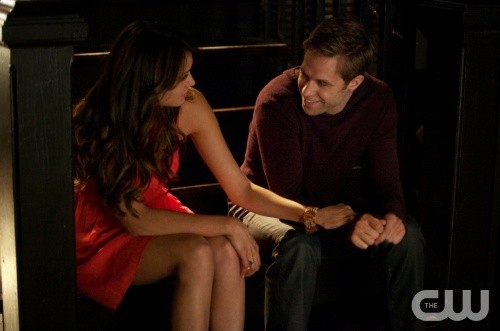 THE VAMPIRE DIARIES episode 8 “Dead Man on Campus” opened with Maxfield playing Dr. Frankenstein with Jesse again. He gives him a IV of blood. Just not in blood mind you it’s Augustine blood. Jesse wakes up and he is super strong. Jesse’s ripped out of his restraints in no time. Maxfield is talking about getting procedures in order when he should have been running, which he realizes a little to late and before you know it Jesse is feasting on him.

Bonnie is sitting in her dorm room making a video phone message for her mom. She has a new haircut. Bonnie tells her mom all about her summer minus that pesky detail about how she died and then came back as the anchor between the worlds of the loving and dead. Caroline and Elena come in and have bags with them. They want to throw her a welcome to college glad your not dead anymore party. Caroline happily shows her the box of beer. I’m pretty sure they need more than one of those for a college party. Elena whips out a bottle of wine, always classy that girl. They both jump on her for not telling her mom about the whole dying thing. Bonnie ask about the size of the party. Elena and Caroline want I to be massive but them they realize they have t really taken the time to make any friends. Just put up some flyers, the whole freaking college student body will show up. Bonnie tells the girls she has to register for classes. Even I know that’s a load.

Bonnie and Jeremy are on a bench making out. So I guess her class registration takes place in Jeremy’s mouth. Bonnie notices a old woman watching her. Jeremy looks up but doesn’t see her. Bonnie tells him she needs to go and that she will see him later that night. The old lady watches Bonnie walk away. Bonnie thinks she got rid of her but then when she turns around she is in front of her. Clearly this old woman has seen Insidious and is a huge fan. She tells Bonnie she is ready and grabs Bonnie’s arm. She disappears and Bonnie feels a great deal of pain as the woman passes over.

Elena is on the with Damon and is telling him to come to her party. Elena runs into Aaron and invites him well more like compels him to come to the party. Back to her phone call with Damon. Elena ask him to tell Stephan to come. Damon thinks he won’t because he remembers he hates them. Elena wants him to ask anyway. Damon walks into the living room and starts talking to Stephan. Stephan has another flashback and sticks his hands through a chair. Damon ask him if he is ok. Stephan tells him yes and leaves.

Katherine is in a bar trying to get the Matt to serve her another drink. He agrees to it but only if she explains what is going on with him. He apparently has a traveller inside him and not just any traveller mind you it’s her daughter Nadia’s boyfriend.

Jesse calls Caroline and is seriously panicking. He ask Caroline to come over. She takes off. His room mate comes home and he chows down on him. Caroline rushes in and stops him. Caroline ask him who in the hell turned him into a vampire.

Jesse tells Caroline everything that Maxfield did to him. Elena shows up with a bunch of blood for him. Caroline teaches him how to heal a human by way of helping his roommate. Elena and Caroline start teaching everything he needs to know.

Stephan shows up at the bar and has a drink with a very drunk Katherine. Katherine is doing shot after shot. Stephan pours out his problem. Katherine thinks it PTSD. Katherine needs a favor. Before Katherine can get around to it Nadia shows up. She introduces her as her daughter. Stephan isn’t sure what to think.

Over at the party Jesse is talking to Bonnie. Bonnie tells him she thinks she is in love with Jeremy. Caroline is explaining to Elena that the odds of Damon killing Maxfield are pretty high. Elena doesn’t think he will. Caroline is clearly not a Damon fan.

Damon has him restrained in the lab. Damon tells him he is going to inject him with one of his vials of diseases. Damon picks the flesh eating one. He tell Maxfield that if he answers him correctly he will heal him with his vampire blood, if he doesn’t he will let the disease run it’s course. Damon shoves the needle deep into his arm.

Stephan is talking to Katherine and Nadia while they wait on Matt. Stephan ask them which one is younger. They both say I am. Matt walks in. Katherine tells him to sit and Nadia calls her boyfriend forward. Katherine ask him why he is in Mystic Falls. He says he was there to kill Silas. Katherine thinks he was there for another reason, the dagger she has. He admits that after he killed Silas he was to kill Katherine. Katherine puts the dagger to his neck and Nadia ask if he used her and why they would want her mother dead. He tells the. He doesn’t ask questions he just follows orders. Katherine sticks him in the stomach. Matt falls over. Stephan ask her what she did. Katherine tells,him Matt will be fine but that his traveller won’t be and the reason he wanted her dagger is because it is the only thing that can kill passengers. Nadia looks at her.

Maxfield is all sweaty and looking pretty bad. Damon wants to know why he wants to use college kids foe experiments. Maxfield tells,him it’s for the greater good. Damon ask him exactly what that night be. When Maxfield refuses to answer he shoves another needle in his arms injecting him with Rabies.

Caroline is dancing with Jesse. Caroline explains all his senses are supercharged. Jesse wants to know if it will ever go away. Caroline tells him no.
Maxfield tells Damon he was making Jesse into a different kind of vampire. The kind that won’t need human blood anymore. Jesse kisses Caroline. Maxfield tells Damon that human blood will only sustain Jesse until he gets what he really wants. Damon ask what that is. Jesse and Caroline are still kissing. Jesse’s face starts to change and he ends up biting her lip. So Jesse is going to crave other vampires. Which is genius really. Jesse freaks out and takes off.

Elena is walking around the party. Aaron spots her. Elena gives him a Jell-O shot. Aaron tells her that Maxfield is his legal guardian because his parents are dead. Elena ask him how it happened. When he tells her she realizes that vampires killed them. Elena gets up to go call Damon and make sure he doesn’t kill Maxfield. Caroline ask her if she has seen Jesse. Elena hasn’t.

Stephan is roaming around the bar. He has another flashback and breaks the shot glass in his hand. He takes off outside. Katherine follows him. Stephan starts choking her. Katherine tells him to start naming the people he killed. He lets her go. Nadia comes out pissed that she killed her traveller boyfriend. Nadia tells Katherine to rot in hell and takes off.

Elena calls Damon and makes him promise he won’t kill Maxfield. Damon tells her he won’t but she clearly doesn’t buy it because she takes off running, Damon tells Maxfield that he knows people like him. Damon tells him he might snuff him out. But then he decodes to heal him. Before he can Jesse comes in. He goes for Damon. Damon explains he is the stronger of the two. Maxfied tells him that isn’t exactly accurate. Jess grabs him and they crash through the door. Damon is trying to hold Jesse off. But Jesse manages to bite down on him. Elena stakes him and he dies. Caroline see it all. Caroline is devastated. Elena apologizes. Caroline tells her she is to. I guess Jesse had to die so Klaus and Tyler will have something else to fight about ….Caroline.

Stephan finds a letter that Katherine wrote for Nadia explaining why she is going to kill herself. Katherine jumps off the clock tower but Damon catches her. Stephan ask her why she did it. Katherine tells him she is dying. Stephan tells her she is Katherine Pierce and to suck it up. Stephan leaves. Katherine thinks about what he said and smiles.

Bonnie is with Jeremy. They start kissing. It gets pretty hot and heavy from the start. Bonnie sees Jesse and goes over to him. Jesse tells her he isn’t ready and grabs her. Bonnie screams. Jeremy ask her what happened. Bonnie explains the whole I feel dead people thing. Bonnie tells Jeremy being with him is worth it. They get in bed.

Elena is cleaning up. Caroline apologizes to her. Elena tells her that Jess was dangerous. Caroline thinks Damon is dangerous.

Damon is still putting all his diseases away. He opens the refrigerator and sees a bag of blood and ask about he numbers on it. Damon realizes he has a connection to what they are doing. Maxfield tells him he must be a Augustine vampire. I get it he is going to be the Spike , Stephan the Angel , and Elena the Buffy. Damon decides to kill him. Maxfield breaks loose. Damon grabs him. Maxfield pushes a button and vervain comes out.

Damon wakes up in a cell. His old cell when he was a lab rat to be exact.