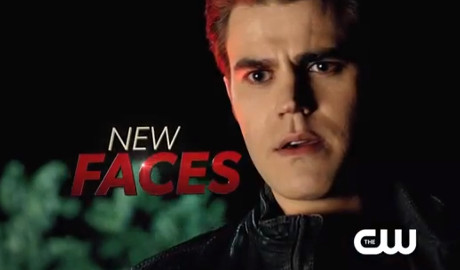 The Vampire Diaries season 5 is coming right around the corner and, just let me tell you this right now, if I have to cope with the existence of another doppelganger I’m going to scream. While I know how to spell the word doppelganger, I do share Damon Salvatore’s sentiments when he exclaims in the recently released trailer, “If I have to hear doppelganger one more time, I’m going to have to learn to spell it.” Maybe it’s just me, but the whole doppelganger situation is, perhaps, one of the most confusing things of my life at the moment.

In this promo trailer for the upcoming season, which airs October 3rd on The CW, we get glimpses of a human Katherine (she was forced to sip The Cure), the perpetually angry Jeremy throwing some punches, Damon and Elena saying “I love you” (in real life, too), and a sexual bath scene with Silas (who looks like Stefan) and Katherine (who looks like Elena) #MindMush.

Also in the trailer, we see a resident of Mystic Falls crash his or her car into a light pole. We’re not sure who it is, but we hope it’s not a human character — because those are, slowly, becoming rare creatures in Mystic Falls. Like, sometimes, we get excited when we see a normal person in a scene. Whatya mean you don’t have fangs, can’t separate the veil between the dead and the living, or can shift into a wolf? Matt really was the only great human and, for some reason, I feel as if he might be getting a bit less screen time than he did last season.

Watch the trailer below and let us know what you think!