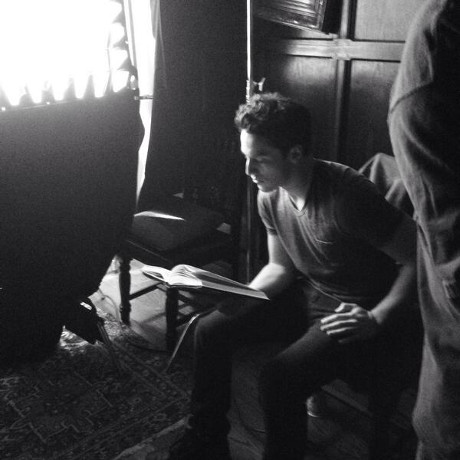 We said farewell to Tyler Lockwood on The Vampire Diaries when he chose to chase Klaus to New Orleans, and many fans have grown concerned that he’s decided to stay away for goodsies. But this can’t be the end of Tyler, the boy who’s lost so much at Klaus’s hand, can it? Judging from a recent photo posted by Steven R. McQueen (Jeremy Gilbert) on Twitter, perhaps our hybrid-loving hearts can stop stressing out and rest easy. Tyler Lockwood, the ripped werewolf-vampire combo, just might be returning to Mystic Falls sooner than we think.

McQueen posted a photo of Michael Trevino (Tyler Lockwood) reading a book on, what we’re assuming to be, the set of TVD. “Getting some reading in @Michael_Trevino,” McQueen wrote alongside the photo. Does this mean Tyler’s on his way home? Will he attempt to rekindle his flame with Caroline Forbes — or has that fire been snuffed out forever?

It’s rumored that Klaus will be strolling back into Mystic Falls sometime during season 5 and, to make this salty gossip even tastier, some have speculated that he won’t be coming alone. Perhaps our dear boy Tyler will temporarily suspend his desire to kill Klaus and hitch a ride with his archenemy. Maybe they’ll exchange cupcake recipes, war stories, and have a generally fantastic bro moment. We can always hope for friendship in Mystic Falls, right? Unfortunately, every time we make this wish, well, bad things happen (i.e. stakes through hearts, snapped necks, broken spirit realms, etc.).

Let us know if you’re excited for Tyler’s potential return! The Vampire Diaries is currently on hiatus but is scheduled to return January 23rd at 8PM on the CW.