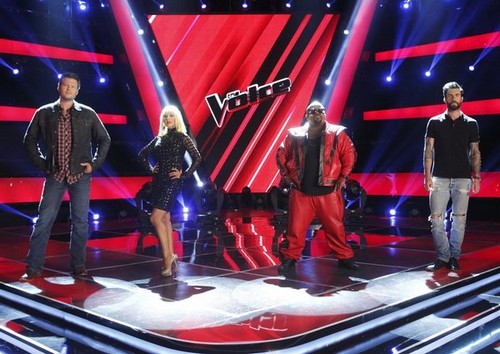 THE VOICE is one of our favorite singing reality competitions because the judges – definitely have a good time and are even quite funny. Tonight, The Voice season 5 will be returning for “The Battles Premiere”  With a trip to the knockout rounds at stake, the artists sing do-or-die duets for their coaches.  There was some amazing talent on last week’s episode. In case you missed it, check out our LIVE RECAP — CLICK HERE.

On last week’s show it was THE BEST OF THE BLINDS – Carson Daly (“Last Call with Carson Daly”) hosted a special recap of the blind auditions, showcasing the best and most memorable moments of the blind auditions. Coaches Adam Levine, Blake Shelton, CeeLo Green and Christina Aguilera took a look back at their decisions as they headed into the battle rounds.

On tonight’s show the coaches have each selected their 12-member teams that will advance to the “battle rounds” phase of the competition.  the coaches and celebrity advisers will work with their respective teams of performers, developing skill sets, offering advice and encouragement, and sharing secrets about their own personal success to help them move forward in the competition.  During the “battle rounds,” each coach will pair two of their own team members against one another, each asked to sing the same song together in front of a studio audience. After the vocal battle, the coach must pick which of his/her singers will advance to the knockout round, while the losing artist is available to be stolen by another coach. Each coach has two steals available during the battle rounds.

Tonight’s  The Voice “The Battles Premiere”  is going to be an exciting one, which you won’t want to miss. So be sure to tune in for our live coverage of NBC’s The Voice – tonight at 8 PM EST!   While you wait for our recap, hit the comments and let us know how excited you are about the new season of The Voice.

RECAP: Tonight is the beginning of the battle rounds the first pair going up against each other is from Adam’s team; it’s Grey and Nick Hawk. Grey wanted to leave her wedding band to actually start a career as a solo artist; Nick Hawk is a theatre veteran that wants to better the life of his family.

Adam and his guest Ryan Tedder wanted to take these two different artists and make them go against each other; they are singing Domino by Jesse J. Grey knows the song by heart but Nick isn’t all that familiar with it; Ryan is telling them their flaws in their notes. Ryan tells Grey that Nick is cutting more with his notes but they have equal power.

Blake says that it was entertaining and believes that both of them broke his heart because Grey passed on him and didn’t hit on him either. Blake says that it’s impossible to not get wrapped up with Nick; Christina says Nick has the energy level but believes Grey was very steady. CeeLo says she is beautiful but gives it to Nick with his awesome presence. Adam says that they both are great but vocally Grey is better but as a performer he is much better then she is; Adam picks Grey.

Nick tells Adam thank you for being here and Blake decides to steal him to go on his team; he believes Adam is an idiot and decided that he delivered a great vocal performance and had great showmanship.

Next up is Christina’s team Amber Nicole and Timyra-Joi. Amber has a lot of music in her families background. Timyra’s family had financial troubles and does it to stabilize their future. Christina gave them Listen by Beyonce to sing; it’s a big song that she wants them to dominate it with their powerful voices. Christina is telling them about their serious flaws alongside Ed Sheeran; he’s nervous as well because he’s never been a mentor before. Ed believes Timyra’s voice suites the song very well; but Christina felt she was only giving 50%. Christina says their is some doubt in Amber’s voice but believes she can do well. Ed thinks that both girls are quite even and it will be hard for Christina to choose.

Christina is in tears from their performance and seriously believes they are both vocally amazing; they touched her heart. CeeLo says that it was unbelievable how amazing their performance; she slides more to Amber at the beginning but gives it Timyra. Adam says that Timyra was just so fantastic; Blake says it’s a win to make Christina cry because it’s a first. Christina says it’s the worst part right now because she has no idea what to do; Christina decides the winner is Amber.

Timyra thanks Christina for the opportunity and will take everything that she has taught her; Christina says that Amber was really good and sadly nobody stole her.

Next up Blake and his advisor Cher; the pair is Justin Chain and Shelbie Z. Justin came to the Voice after a horrible motorcycle accident but his performance won Blake’s heart; Shelbie use to be in pageants but stopped after being made fun of but now won the heart of the coaches with her voice. Blake says their pairing was the easiest for him to make; he’s making them sing “Dont You Wanna Stay” by Kelly Clarkson and Jason Aldean. Cher and Blake tell them their flaws and says that they have to connect with the song and show some good emotion.

Blake believes their harmonies are all over the place and they have to work on it much better; Cher says they have great potential together in this duet.

Christina says that she thought they were a great duet pairing, but she believes they blended perfectly but like Shelbie Z better. CeeLo says they gave a great performance and believed when they hit the notes it was beautiful; it gave Shelbie a better chance to hit higher notes though. Adam felt like it w as more of a performance and felt like they were a good unit and goes with Justin though. Blake says the song is a duet and felt like Justin would have kicked his butt; he believes Shelbie delivered as well as Kelly did. Blake believes the winner of the battle is Shelbie Z.

Justin thanks Blake for working with him and appreciates all the advice he was given; Adam is surprised that the talent in the battles is just insane.

Team CeeLo is next with his adviser Miguel it’s Anthony Paul and Caroline Pennell; Anthony put college behind to try and become a solo artist and really wants to have a professional career. Caroline surprised the judges with her unique voice; CeeLo chose “As Long As You Love Me” by Justin Bieber for them too sing. Caroline believes the song is out of her genre but wants to make it her own; Miguel believes she makes choices that really make the song her own.

Adam says they both killed it; their pitch and the emotions were beautiful. But believes Caroline is the winner because it was like her own song; Blake says it was obvious they are good but believed Anthony showed more versatility. Christina says it was her favorite battle all day; she felt the heart and loved it. Christina can’t even give an answer to who won that battle. CeeLo says that he is very proud of both of them; it was in fact his favorite battle today. He believes Anthony has a sufficient voice that’s unreal; Caroline though has such a surreal sound that makes him dream. The winner of the battle is Caroline.

Anthony tells CeeLo it was an honor to be here and that it has been a great ride; Christina steals Anthony from CeeLo. She loved how fantastic his vocal control was and wants to find out more about him.

Next up is Donna Allen and Tessanne Chin; Donna impressed the judges with her beautiful voices. Tessanne came from Jamaica to try and become an international artist. Adam mentions they are his favorites and lets them sing “Next To Me” and wants to hear Donna show her smoother side with her vocals like Tessanne. Ryan believes Donna can steam roll people; she is so loud and clear. Ryan believes the winner of the song will be the on who owns it the most; Ryan believes there will not be a clear winner.

Blake says it was epic, he can’t believe Donna’s range and her raspy sound. He loves how Tessanne just does all these awesome trick; he gives it to Donna though. Christina says they took a simple song and made it so aggressive; she believes they each took the song to a whole new level but gives the edge to Tessanne. CeeLo says that Tessanne attracted him more but Donna had a beautiful sound. Adam says that they each have something the other has and it makes the choice so much harder; he believes Donna sounds like Tina but not an imitation. He believes any of them could win the competition; Adam decides the winner of the battle is Tessanne.

Donna says that it has been an honor being there and has been greatful to sing in front of them; nobody steals Donna and Adam is shocked they didn’t steal her.

Christina’s next group is Briana Cuoco and Jacquie Lee; Briana is ready to show that not only her sister can stand out and that she herself can have a chance in the spot light. Jaquie sang a song that really impressed the judges. Jaquie loves Ed Sheeran and was so nervous meeting him. Chrisitna chose “House of the Rising Sun” by The Animals for the girls to sing; they chose the song for their strong Rock influences.

Ed Sheeran tells the girls to make the song their own; to make it a bit more aggressive for the battle.

Christina and Ed tell them their weakness with their singing and performance wise.

CeeLo says it was amazing, he felt Briana did compliment the song greatly but says that Jaquie actually got his edge. Adam says that it’s tough, he was going for Briana but started faltering; he has no idea to choose. Blake is surprised by Jaquie’s control and Briana had the same power as she did but Briana captured the song much better. Christina says it’s a repetitive melody and both girls won the battle digging deep into the song; Christina decides the winner of the battle is Jaquie. CeeLo hits his button and Blake does to steal Briana; CeeLo says there is nothing he appreciates more than true talent and the story in her voice. Blake says that he has a feeling that she is a song writer and likes how she connects with the song; Briana decides her new coach will become Blake.