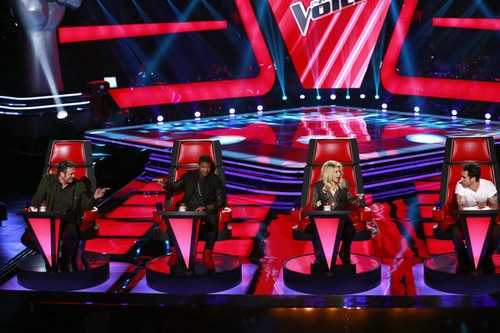 THE VOICE returns to NBC tonight with a whole new episode.  Shakira, Blake, Usher and Adam match up their singers in more do-or-die battles.  Did you watch last night’s episode? We did and we recapped it here for you!

On last night’s show the competition moved on to the next phase of the competition, The Battle rounds began.  The coaches enlisted the help of the music industry’s top recording artists to offer their knowledge and skill as advisers.  The coaches paired singer  from their teams, working with them individually and together in preparation to meet in a duet that will decide their fate.  On last night’s show Shakira stole two competitors from Adam Levine: Sasha Allen and Karina Iglesias.

On tonight’s show the battles continue, so far we have only seen six battles unfold so far so their are many more to come.  Tonight the coaches will match their singers up again for the battles.  What did you think of last night’s show did you think the judges made the right picks?  Hit the comments and let us know your thoughts!

Tonight’s  The Voice “Season 4  The Battles Part 2”  is going to be an exciting one, which you won’t want to miss. So be sure to tune in for our live coverage of NBC’s The Voice – tonight at 8PM EST!   While you wait for our recap, hit the comments and let us know how excited you are for the new season of The Voice.

RECAP: Adam and his celebrity adviser, Hillary Scott work with Warren Stone and Michael Austin who will be battling while they sing Jason Aldean’s “My Kind Of Party”. Blake thought watching Michael come into the ring was like watching Stone Cold come into the ring, he captured the outlaw thing, Warren is a little smoother – Blake would pick Michael. Usher thinks Michael is heroic, but Warren had that country swag, Usher would go with Warren. Shakira liked them both equally. Adam has the final say, he thinks they both come from different realms of country, but looking at the future, the winner of this battle is Warren. Michael was available to steal, but there were no offers.

Usher and his celebrity adviser, Pherrel Williams are ready to work Usher’s first battle round for the night, Jeff Lewis vs. Josiah Hawley and they are singing “Roxanne” by the Police. Shakira thought the audience seemed to love it, she thinks the song is a difficult one and she is not impressed with the performance. Adam felt like there was too much going on, but he would pick Josiah as the winner. Blake thinks Josiah looks like a rock star, but vocally he gives it to Jeff. Usher has to make a tough decision on who is going to remain on his team, it is Josiah. It’s an opportunity for another coach to steal Jeff, nobody does, he is going home.

Blake’s Grace Askew and Trevor Davis, also battled it out singing “Me And Bobby McGee”, Trevor was eliminated.

Usher’s Audrey Karrasch and Jamila Thompson, also battled it out singing “If I Was A Boy”, Jamila was eliminated.

Shakira’s Tawnya Reynolds and Mark Andrew, also battled it out singing “The Chain”, Mark was eliminated.

Blake and his celebrity adviser, Sheryl Crow, are getting ready to work with his two contestants, Caroline Glaser and Danielle Bradberry. Blake paired the two because they don’t have as much experience as the others. The two are singing “Put Your Records On” by Corinne Bailey Rae. Usher thought they both came out confident, but in the middle the harmonies were shaky. Shakira thought the performance was as refreshing as tangerine ice cream, she was impressed by Caroline’s uniqueness and the lack of experience. Adam thinks he is an imbecile for not picking Caroline. Blake thinks it is complicated and put two artists together that have no business being together. Blake has to make the toughest decision of the night, he picks Danielle. Caroline is available to steal, she has two steals, Usher is in and so is Adam, as fast as lightening – these guys have their minds made up that they want her on their team. Adam and Usher start arguing about who hit their button first. Adam tells Caroline that what she does astonishes him and he wants her bad. Usher  is gushing over Caroline, he thinks he understands who she is and is willing to set himself on fire. Time for Caroline to make a decision, her heart is telling her to go with Adam.

Blake is a little afraid of the combination of Caroline and Adam, there is no telling how far they can go. Usher can’t believe he lost, he even stole one of Adam’s lines about setting himself on fire.