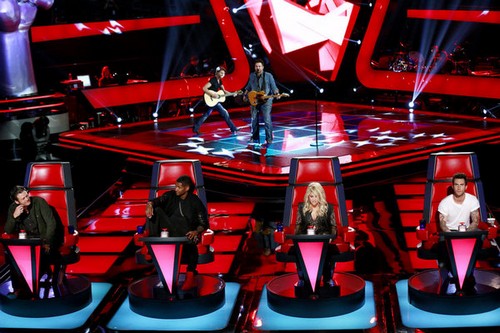 THE VOICE returns to NBC tonight as the Blind Auditions continue with part 4 and the auditions hit full stride. Last night was the third night of auditions with a whole new group of promising singers where contestants sang in front of this season’s coaches Adam Levine, Blake Shelton, Shakira and Usher. Did you watch last week’s episode? We did and we recapped it here for you!

On last night’s show Carson and the coaches return for their second week of blind auditions. Newcomers Shakira and Usher have held their own against Blake and Adam. Tonight’s two-hour episode will be a chance to bolster their teams with a variety of artists.  A memorable performer from last night was Holly Tucker, the 19-year-old plays saxophone for the Baylor University marching band. Her powerful “To Make You Feel My Love” ignited the house, and all four coaches spun their chairs. Forced to decide, the Southern singer chose Blake.

On tonight show the blind auditions hit full stride as Blake, Adam, Shakira and Usher pursue the performers who could win it all.  Half the seasons choices have been taken so far.  What do you think of the coaches’ new additions?

Tonight’s  The Voice “Season 4  Blind Auditions 4” is going to be an exciting one, which you won’t want to miss. So be sure to tune in for our live coverage of NBC’s The Voice – tonight at 8PM EST!   While you wait for our recap, hit the comments and let us know how excited you are for the new season of The Voice.

So far this is where the judges stand with their picks.  Shakira has 7 team members, Adam and Usher have 6 and Blake has 5.

Audrey Karrasch, 20-years-old from Nevada, she has been a Ford Model.  She felt modelling was a very superficial world and decided to start singing again.  When she is singing and writing she is happier than anything.  Tonight she is singing, “Price Tag.”  Adam turns around almost immediately.  Usher is the next to turn his chair.  Blake says, “I knew that you were great from the beginning, because of your attack on the song, I am really excited about you.”  Shakira, “I already can tell you have great stage presence.”  Usher, “It takes strength and confidence to move this crowd, you have one chance to make a long lasting impression.”  AUDREY CHOOSES USHER

Brandon Roush, 19, from Kentucky and he has a band and he works with kids with autism.  He is glad the judges cannot see him, he wants to be judges on his voice.  Brandon is singing, “With A Little Help From My Friends.”   Shakira is the first judge to press her button.  Blake says it is not suppose to be what he looks like.  He did not expect a white dude with long hair. Sharia says, “She thinks his voice is exquisite, the notes he hit were right on.”  BRANDON IS ON TEAM SHAKIRA

Betsey Barta is from MN, he started singing when she was a kid.  She use to sing at home, but when she went on stage she would stare at the floor.  She decided to become a street singer to get over her fear.  Betsey is singing,  “Set Rain To The Rain.”  No judges turn for her.  Blake tells her she bit a lot off singing an Adele song.  Adam tells her she is a great singer and she did a great job!  NO JUDGES CHOOSE HER!

Patrick Dodd, 25, from Mephis he is a family man.  He had his kids at a very young man.  He has been a landscaper for 10 years.  His family has pushed him to get back to music.  Patrick is singing, “Walking in Mephis.”  Shakira turns first, closely followed by Adam.  Shakira gives him a standing ovation. Shakira tells Patrick, his voice was awesome and he has so much soul in his voice.  She tells him to never underestimate a 5 foot 3 Colombian girl.  Adam tells Patrick that he loves his density and soul in his voice.  PATRICK CHOOSES ADAM!

Orlando Dixon, 24, from Washington D.C.  he graduated from Berkley University in Music and he has been training for this all his life.  He is young and trying to build a career and is currently singing as a wedding singer.  Orlando is singing, “So Sick.”  Usher is the only coach who presses his button at the last second.  Adam tells him he is a great singer.  Usher tells Orlando he is happy he turned his chair, he thinks he has a great tone, but he is going to push him more.  ORLANDO IS ON TEAM USHER!

Savannah Berry, 17-years-old she posted a video singing Sugar Land’s song and they contacted her and she did a duet with them.   Savannah is singing, “Safe and Sound.” The first judge to turn around Adam, followed by Shakira, then Blake last.  Usher welcomes her to The Voice.  Blake tells her he is fascinated by her voice.  Adam tells her she is so good.  Shakira tells her to use her logic, Adam and Blake are dated.  Shakira tells her she wants to be with someone fresh.  Adam tells her it is terrifying how good she is and she should go with the person who pressed his button first.  SAVANNAH PICKS BLAKE AS HER COACH!

Night 4 of the Blind Auditions end!